Architecture can speak volumes about a business – how it positions itself in the marketplace, its workplace culture and its vision for the future.

When ThomsonAdsett won a competition to design a new home for the Port of Brisbane, it was clear the headquarters needed to be more than just an office building, says architect Chad Brown.

"The port wanted a signature building that would reflect the extent of the company's activities, not just in Queensland and Australia, but also globally," he says. "The port is a major player in terms of world shipping, and the building needed to reinforce this. It also needed to set a benchmark for sustainability by achieving 5-Star Green Star status. But at the same time, the primary focus was about creating the best possible work environment."

Brown says the port itself is on a large island, with a waterfront that is more than 5km long.

"It is hard to get a sense of the scale of the port's activities from the ground, so we decided to elevate all the office floors. This not only maximised the amazing views, but also minimised the building footprint. This meant we could have the car parking below and retain the existing landscape features." 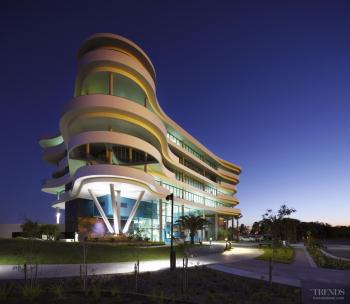 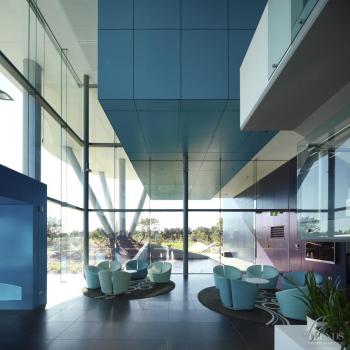 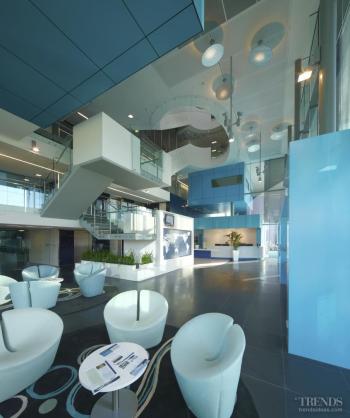 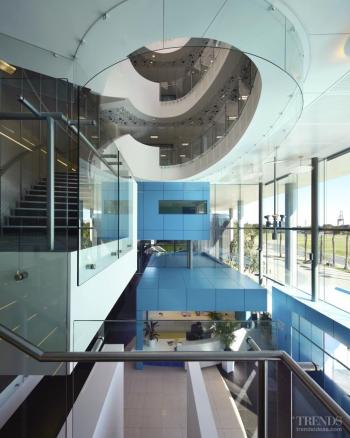 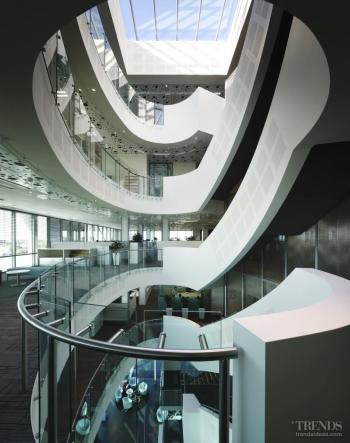 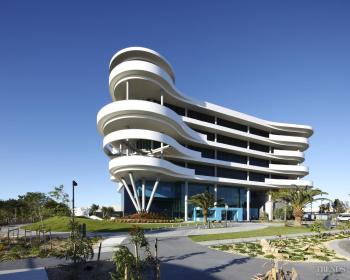 ThomsonAdsett was already familiar with the port's operations – the firm was commissioned to masterplan the entire precinct and was involved in the design of other port buildings on site.

Brown says the design of this building evolved from a study of floorplate requirements, and the need to meet a variety of additional criteria.

"Although the stacking of the balconies is reminiscent of an ocean liner, the actual form was a design response to the need to create outdoor breakout areas for the staff. We elongated our initial design to minimise the exposure to the sun in the east and west, and to maximise the orientation to the north and south. We also enlarged the size of the sky garden in the northeast and moved the staff café nearby. This in turn needed to be balanced by a similar form in the opposite corner.

"The curved geometry was essentially a response to the functional requirements – and an environmental filter. The veranda overhangs ensure that for 80% of the year, the exterior fabric of the building is shaded. In addition, the design allows water to be collected from the walls as well as the roof, for greywater and irrigation use."

Other maritime references include four large shipping container-style boxes, finished in the port's corporate blue. All the boxes appear to slide through the glazed exterior of the building, creating a transition between inside and out. One box defines the entry, another the reception desk, and the other two boxes form large meeting rooms.

"These boxes are suspended within the atrium, so they appear to float within the void, articulating the upper level," says Brown.

The larger of these two boxes is a multipurpose room that can accommodate up to 100 people. A square-edged landing on the central stair has a similar rectilinear form.

"The main stairwell in the atrium plays a central role," says Brown. "Like the meeting rooms, it appears suspended in the void, and twists back on itself so people can enjoy the view back to the precinct, as well as into the atrium. The stair is the first thing one experiences as one moves into the lobby. The lifts are tucked out of sight.

"On the upper levels, the stair has a completely different design, with the rectilinear look giving way to a more organic form. This contrasts with the more structural office layout required by the port. The curve is a distinct form that is experienced as one moves through each floor. It is echoed in the shape of the acoustic panels in the ceiling and also in the flooring treatments, which act as a wayfinding element."

A large skylight allows natural light to flood the centre of the building, down through all levels. The skylight has an operable roof, which automatically opens to remove smoke in the event of a fire.

Brown says the open nature of the office also provides a transparency that ensures workers are connected visually. Opportunities for interaction are increased by the provision of breakout areas, and through staff using the stairs, rather than the lifts.

In keeping with the building's 5-Star Green Star rating, an energy-efficient active chilled beam air conditioning system was installed. Water is cooled at night to take advantage of off-peak power rates and the cooler night air temperature, and then pumped through the building in the daytime. Workers have individual controls on their workstations so they can regulate the amount and direction of the air flow. This workstation-based system allows 100% fresh air to be delivered at a warmer termperature than traditional ceiling-based systems. This in turn provides further savings.

Brown says the success of project is the result of a highly collaborative approach between all the parties, the early engagement of engineers, allied designers, and ADCO Constructions as the main contractor, and a commitment to high quality.