One way to celebrate the old is to contrast it with the brand new. In a kitchen environment the stainless steel appliances naturally take on the contemporary role, leaving hand-worked cabinets and surfaces, and occasional elements to balance the equation.

This large kitchen, by designer Jill Jarrett, forms part of a three-level add-on to what was once a small log cabin built in the 1700s. Since that time several remodels had expanded the house. This addition includes a guest bedroom and gymnasium on upper floors, with the new kitchen and a family room on the ground level.

The owners frequently entertain family and friends so the space had to work for groups large and small. They also wanted to continue the playful contrast between old and new seen in other parts of the house, says Jarrett.

"Surfaces play a dramatic part in evoking a traditional rustic aesthetic, and achieving this look required the skill and patience of artisans. The feature fieldstone wall was built by hand and the ceiling pieced together from recycled barn wood. Each of the marble floor tiles was chiseled by the tile installer to create the desired antique feel."

Even the perimeter countertops received the personal touch. For example, the marble of the countertop backed by the fieldstone wall had to be scribed to fit snugly around the individual stones in the wall surface. 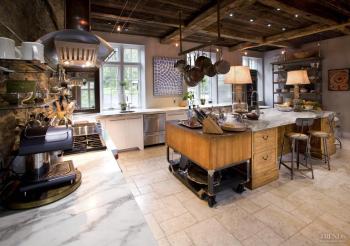 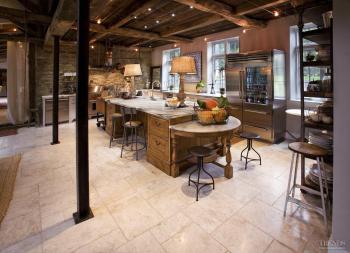 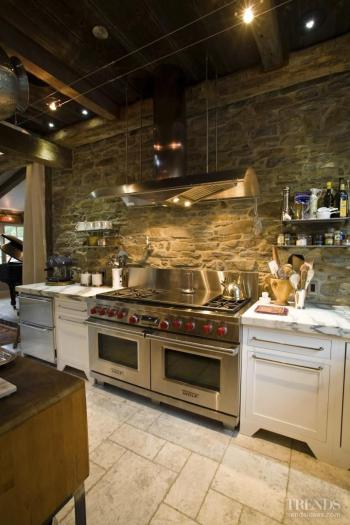 The island in the middle of the room was designed to allow the chef to cook or prep while still engaging with guests and is made up of three separate elements, says Jarrett .

"The central piece was inspired by the look of an antique dresser, with high toekicks that imply cabinetry styles of the past. At one end, a half-table was set at a lower height for easy access when the owner and daughter roll out dough while baking together.

"For the other end of the island, we sourced a very old butcher's block and removed the turned legs, replacing them with a custom wrought iron base structure – its solid welding highlighted rather than disguised. Castors were added to further the semi-industrial look that connects, as well as contrasts, with the many stainless steel appliances.

"This substantial piece is a microcosm of the entire kitchen design – a 200-year-old wooden block teamed with a frankly industrial base."

The perimeter cabinetry is more transitional in style, while the double Wolf range, Trapeze range hood by Zephyr and French-door refrigerator provide bright, functional counterpoints to the rustic aesthetic.

Light-filled, with efficient work triangles, this kitchen offers comfort and functionality. As well as the appliances on show, a dishwasher and microwave are tucked out of sight on the back of the island.