From the colonnaded hacienda-style courtyard to the solid, plastered walls and vaulted ceilings, this holiday home pays tribute to Spanish Colonial architecture

Past is present Discover this article's resources 0

Architecture evolves over time, but there's always a good reason to trace a style back to its roots – you can be sure there is a valid reason for the local architectural vernacular.

In the desert-like landscape outside San Miguel in Mexico, houses are traditionally built in the hacienda style, with extra-thick walls, high ceilings and internal courtyards that allow the breezes to waft through. These features help keep the house cool during the heat of the day and warm through the long, cold nights.

New York-based architect David Howell NZIA took his cue from this traditional architecture when he designed this modern home, but he says that is where the similarity with Mexican houses stops.

"Owner John Houshmand wanted a contemporary house, with minimal decoration," he says. "Mexican architecture is very colourful with lots of bright tilework, wrought iron and rounded forms. This house was designed in the more monastic Spanish Colonial style, which is also part of the local heritage."

Howell says the house is positioned on an elevated site, with its own spiritual history. 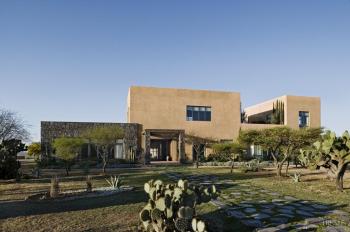 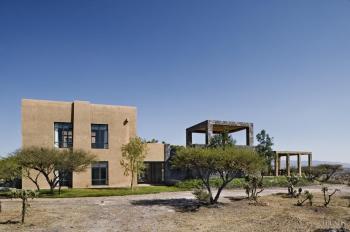 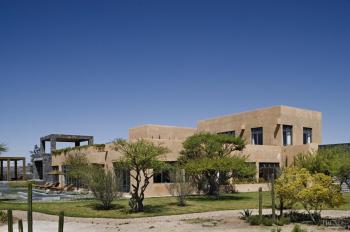 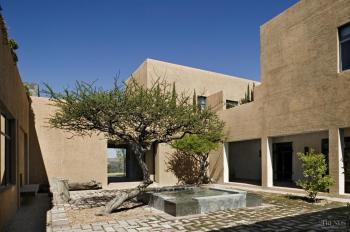 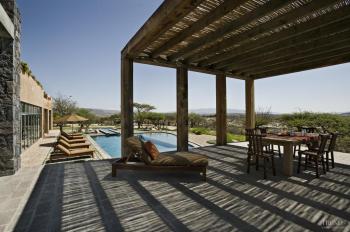 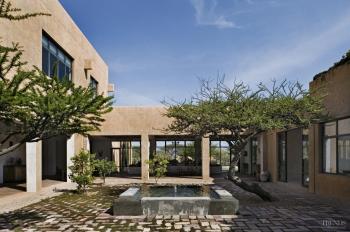 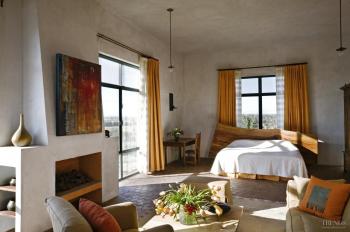 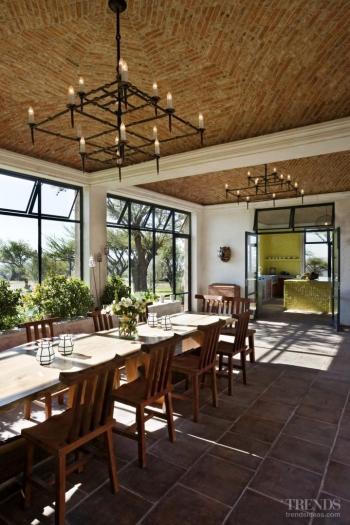 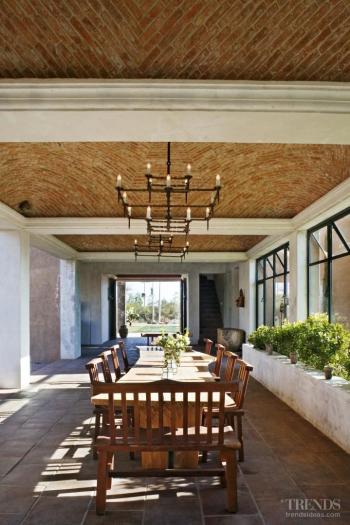 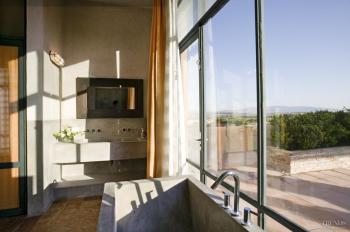 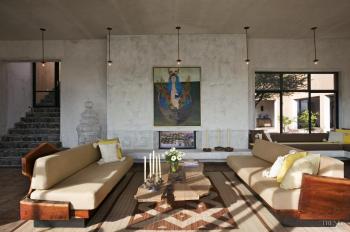 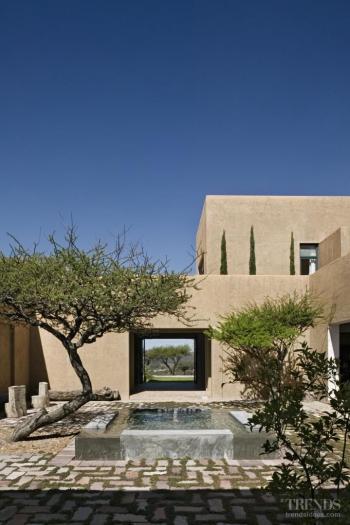 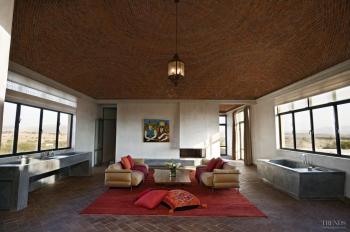 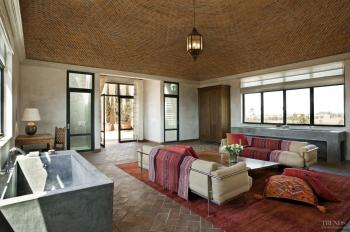 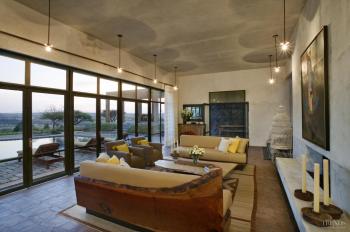 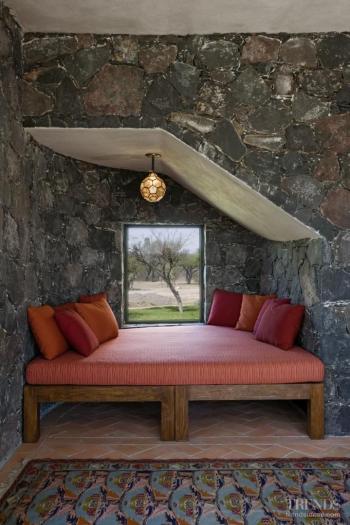 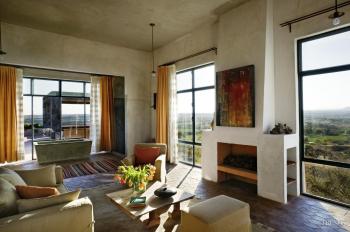 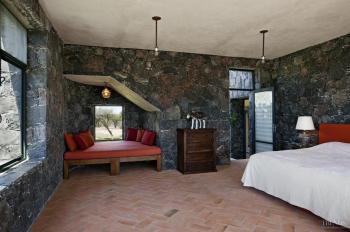 "We didn't want the house to stand out as a monumental building on the top of the hill. Even though it is very large, at 1115m², it needed to blend in with the landscape."

Working in collaboration with Houshmand and interior designer Steffani Aarons, Howell designed a hacienda-style house around a large courtyard that is a pivotal design element – in more ways than one.

"The courtyard helps to mitigate the environment," says Houshmand. "Outside there may be harsh sun or wind in winter, but the courtyard has its own microclimate. The shaded colonnaded areas in turn have their own microclimate, as do the rooms leading off these passageways. There is also a psychological progression – from the very public areas to the private and more intimate spaces inside."

Howell says the key axes within the house align with the two trees growing in the courtyard. Sightlines are provided through the house, across the courtyard, through windows and across the pool on the other side, so there is always a sense of transparency – the breezes cross ventilate the house in the same way.

In keeping with another local tradition, the house is built from thick concrete blocks, which were handmade on site by a local workforce. The walls were plastered in an adobe colour, hand trowelled and left to weather.

To visually anchor the house in the landscape, Howell introduced two single-storey volcanic stone structures on diagonally opposite corners. These solid, cube-like volumes feature double-thickness stone walls, both outside and in.

"As well as providing a visual event on the exterior of the house, these structures bring an extra dimension to the interior," says the architect. "One stone room is the music room, and the other a massage room. Moving from the main part of the house into one of the stone rooms enhances the experience of the house – this is a house that is all about the quality of the spaces and the feelings they evoke."

The interior design reflects the esoteric influence. Walls in most rooms are plastered, trowelled and uncoloured, to form a blank canvas for art that is likely to be collected over the years. Warm orange and red-toned furnishings provide bright accents. Key furniture pieces, including the sofas in the living room and the dining table, were custom made by Houshmand's own company.

Traditional bóveda vaulted brick ceilings are a feature of several rooms, including the kitchen and dining room.

"All the ceilings in the house are 3.65m high, as they are in most Mexican houses," says Howell. "The high ceilings allow the hot air to rise and remain above head height."

The kitchen is the one room where colour has been given a free rein. Bright yellow handmade tiles line the walls and island. These are juxtaposed by mesquite hardwood doors set in concrete cabinets – the concrete was poured in situ.

Similarly, concrete tubs and vanities built in situ are a feature of the master suite and most guest rooms. These suites provide private living spaces for guests. Tubs are positioned in front of windows, and there are gas fires, chairs and sofas.

"In every way, the house is a retreat," says Howell. "It is large enough for people to disappear when they want time to themselves, yet it is also a house that comes alive with music and laughter."