Many apartments on Manhattan's Park Avenue were built in the days when households had several servants. These staff were generally accommodated in a separate wing, along with the kitchen, which the family never entered.

Today, however, such households may just have one staff member and a better standard of accommodation is expected. And families are much more inclined to spend time in the kitchen.

Architect Gavin Macrae-Gibson, who designed this remodeled kitchen in a grand Park Avenue apartment, says the service wing was typical of the rather dilapidated state of many unremodeled servant quarters.

"The wing was a warren of small rooms, pantries and broom closets. Obviously, there was potential to better utilize the space by creating everyday spaces where the family could relax away from the traditional grandeur of the formal reception rooms in the apartment."

Consequently, all the walls in the wing were gutted and the space reorganized to provide a kitchen, home office and a large bedroom with its own sitting area for the family's sole staff member. 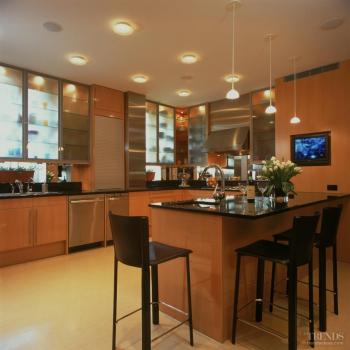 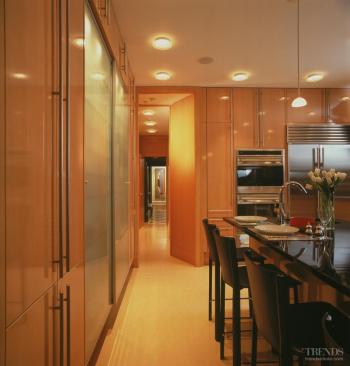 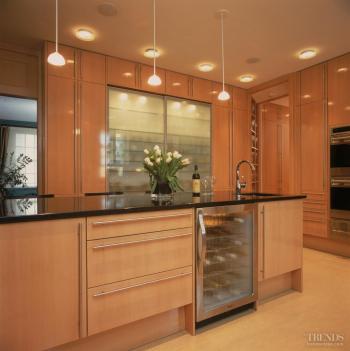 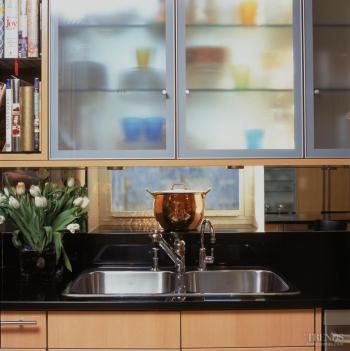 "The kitchen needed a luxuriousfeel in keeping with the grandeur of the rest of the apartment," Macrae-Gibson says. "But it needed to be a lot more informal, calming and visually warm."

To this end, the architect specified beech wood cabinetry with a high-gloss finish, a honey-toned Marmoleum floor and frosted glass cabinets.

"The glass cabinets over the window allow plenty of storage, but don't block the light. They also provide an attractive decorative element."

Sleek black granite countertops, a mirrored backsplash and thin stainless steel drawer pulls enhance the horizontality of the kitchen, while vertical pulls on doors add a sense of height. The reflective nature of the glass, wood and steel also make the space seem lighter and larger.