Pared back Discover this article's resources 0

A good rule of thumb in design is to select one dominant item for a space, then choose finishes and colours to complement it.

The kitchen, on the first floor of the home shown on these pages, had spectacular views over the harbour, which the owners wanted to be the dominant feature of the open-plan living space. To ensure the views would be fully appreciated, the owners wanted a kitchen that was functional and enjoyable to work in without creating a second focal point in the living space.

Kitchen designer andcabinetmaker Lindon Harris says to keep the kitchen simple, a clean-lined, contemporary look was chosen and most cabinetry was kept below the height of the island and main benchtop.

"Fitting out the cabinets in the large central island and in the benchtop under the window with drawers helps to create long, clean lines in the kitchen. This also makes access to the contents very easy," he says.

Because of the large size of the kitchen, dark timber was used on the end walls of the island and for tall cabinetry and shelves around the refrigerator. 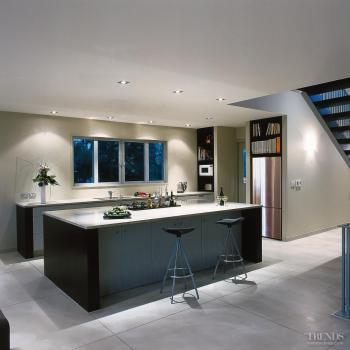 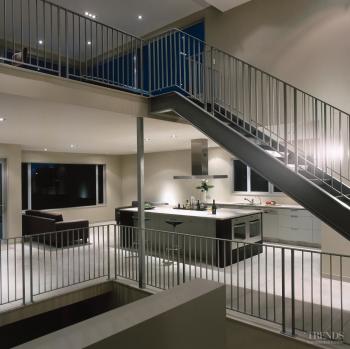 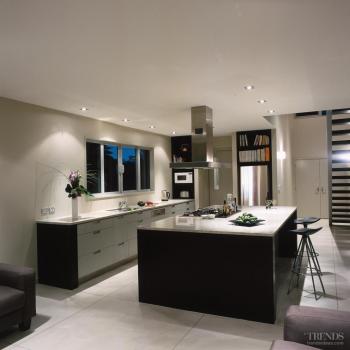 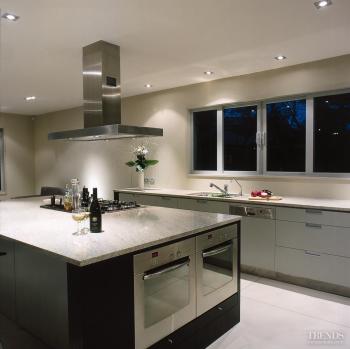 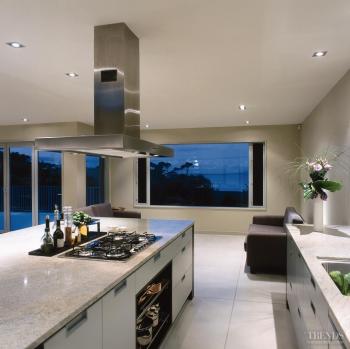 "We felt light colours would be lost in such a large space," says an owner.

For the rest of the cabinetry, simplicity has been maintained with neutral coloured lacquer, neutral walls and benchtops in Kashmir White granite, which is predominantly white with grey veins running through it.

For convenience, the owners wanted frequently used items such as oils, spices and sauces to be near the hob, which is in the 1600mm-wide island. Items like spices are close at hand in small pullout drawers on each side of the hob, and a removable recessed rack in the granite benchtop behind the hob provides a space where oils and sauces can be kept.

"This device also helps to break the width of the island, without being overbearing or intrusive," says Harris.

Two single ovens are also built into the island.

"We located these in the end wall of the island so they wouldn't interfere with activity in the rest of the kitchen," the owner says.

The kitchen also includes a scullery accessed through a door beside the refrigerator/freezer. This refrigerator and cabinets containing a microwave, toaster and breakfast items, on either side of the scullery door, are the only tall elements in the kitchen.

"The refrigerator had to be located in the main kitchen for convenience, and the other cabinets were included to balance it," says Harris.

The designer says the scullery fulfils several purposes. Because the owners enjoy entertaining, it provides a small second kitchen where messy preparation and cleaning up can be done.

"Keeping these in the scullery on open shelves means they are always easily accessible," says one owner.

The scullery also provides extra storage that in most kitchens would be in tall units.

The kitchen is part of a larger renovation of a 1970s home by architect Brent Hulena. By completely opening up this level of the house, one vast open-plan living area has been created. Even the staircase connecting the ground floor, this level and a top floor is exposed, creating an open connection through the centre of the house.