Out of the past

Three decades after it was first suggested, Sydney's Civic Tower rises up from the Masonic Centre, completing a contemporary translation of a 1970s design concept

Out of the past Discover this article's resources 0

When architectural planning provides for a later addition to a building, it can be hard to guess what that future world will embrace. Sydney's Masonic Centre was completed in 1979 without the commercial office tower that had provided a major element of the original design concept. The new Civic Tower completes the overall project in much the same style as it was first conceived, but integrates a phalanx of contemporary design ideas, not to mention two extra floors to ensure its commercial viability in today's marketplace.

PTW Architects was handed the agenda to bring a commercial reality to the concept when developer-builder Grocon bought the ‘airspace' over the centre from previous owners the IPOH Group. PTW's project architect, Tony Rossi, explains how the tower finally rose and the Masonic Centre's street frontages were activated at street level.

"The 1973 design approval provided for a second stage approval for an office tower over the podium. The original building addressed Masonic needs such as a banquet hall, auditorium, offices and underground carparks. However, despite having obtained planning permission for its design, the construction of the tower was neither a pressing nor affordable concern."

The structural provisions by original architects Joseland Gilling for the intended 20-storey landmark structure took the form of a central core with 1.2m-thick walls.

"Bringing the concept into the 21st century meant several aspects of the original plans were expanded on or reinvented," says Rossi. "We were able to provide two extra levels and larger, uninterrupted floorplates to make it a viable proposition. We also added two extra lifts to service the consequent larger population densities each floor would attract." 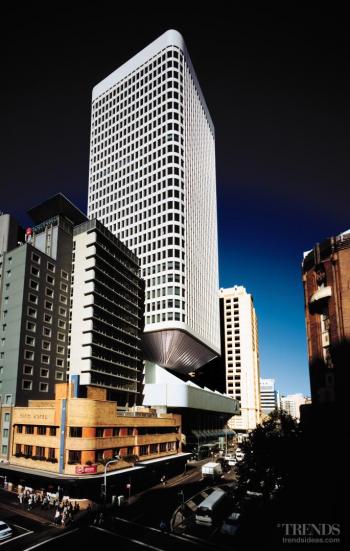 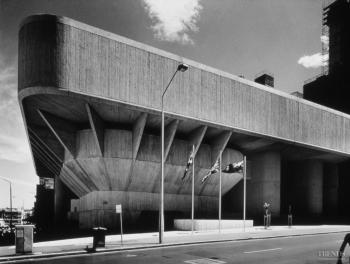 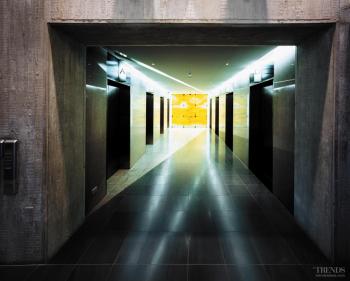 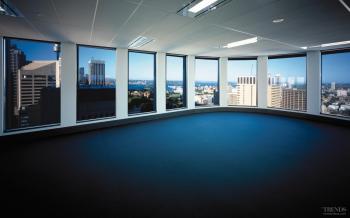 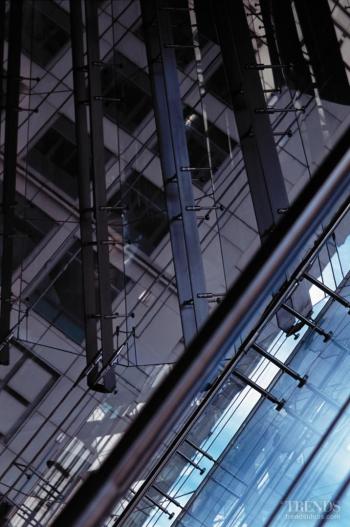 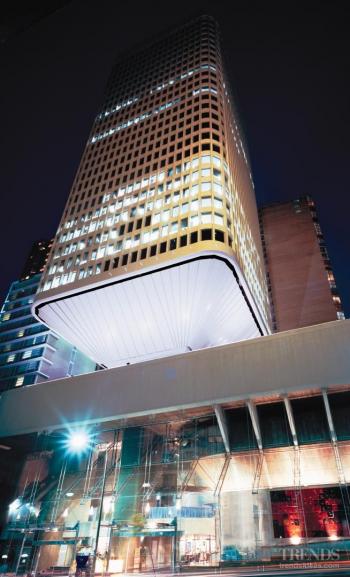 "35 years ago the core was designed to allow for six contiguous lifts servicing the 20 floors, but with the need to service 22 floors, all with more expansive floorplates, this would have been unrealistically slow," explains Rossi. "Today's fast-paced world requires an access time of not more than 25-30 second waiting intervals at ground floor."

PTW's solution was to decrease the size and increase the number. Eight lifts set in two banks of four facing each other across a shared lobby service set floors, from either ground to 10, or 11 upwards.

Plans to extend the tower's capacity dictated a thorough reconsideration of the structural engineering.

"Originally the tower was to cantilever out over the Masonic building, supported by an underbelly of cast concrete, not unlike the podium building itself," says the architect. "Instead, structural engineers Colin Mott MacDonald created something akin to an upside down umbrella structure, with one metre-diameter steel tubes taking the weight of the tower through its outer walls and transferring this pressure back into the central 15m-wide core of the building."

The massive hollow tubes were filled with concrete and welded in place which, together with the tower's exterior walls, amounted to an exoskeleton for the building.

"The tower essentially consists of a tube within a tube structure, the former being the elevator core and the latter the tower's shell," Rossi says.

"With the load supported up through the struts to the shell, the need for internal support columns was obviated. This provided large tracts of uninterrupted office space on all floors."

Build time was an all-important factor in the project. Key to the speed of construction was an external jumpform system, used in conjunction with pre-stressed concrete beams and structural steel formwork. The self-climbing system is based on a lifting system and anchoring mechanism. Applied here, an electrically driven lifting device was supported on the hardened concrete from the preceding completed segment. Once in position, the formwork was anchored to the previously cast segment before the next cycle began, allowing Grocon to use just one crane on the project and complete one floor every five days.

While planning permission had been given 30 years earlier, the developers had to apply for a Section 96 – an application to modify development consent from the original approval. This involved the variance of structural design and elements to facilitate commercial viability. However, it was equally important to demonstrate how the design would be closely sympathetic to the original concept plans.

"We provided several photomontages to demonstrate how the tower would bear a close empathy with the original design," says Rossi. "This included the proportions of 60% masonry and 40% glass facade, that all the essential features followed the original concept. We also had to demonstrate through photomontage views that the tower fitted well contextually in terms of bulk and height with the existing Masonic Centre and the surrounding streetscape."

The result is a building with an aesthetic true to its 1970s conception that stands apart from its many sheet-glass high-rise contemporaries.

At ground level, PTW expanded on original plans for the tower's foyer, whilst the architects' second design agenda was also at pavement level – to bring increased street activity and vibrancy to a site set right in the heart of Sydney's downtown legal precinct.

"This second aspect required a brand new design approval and, again, we had to retain the spirit of the base building," says Rossi. "We utilised the building-to-boundary space by introducing a glass wall at the outer perimeter to enclose 350m2 of new retail area, the existing Masonic foyer, the tower's entry foyer and a cafe. The glass provided a contemporary element, while allowing the original structure to be unimpeded visually."

"Most importantly, we turned an inward, almost secretive building outwards, encouraging pedestrian traffic and a social interaction in an area that had previously been lacking in this part of the CBD."

Now, the tower is a model of modern commercial office space. The building has attracted a 4.5 star energy rating – using gas for hot water, and smaller, more efficient air conditioning units that service floors on an individual basis. These units are motion-activated in strategic areas – as is much of the office lighting. Lighting is also metered on separate floors to encourage individual tenants to monitor energy efficiency.

Furthermore, the high-rise tower has brought an improved aesthetic to the Masonic Centre at ground floor. The new Civic Tower is not only sympathetic to its own conceptual origins but also brings a completed statement to the original building.