Out of sight Discover this article's resources 0

Being the first owner of a new condominium apartment has many benefits, especially when it comes to the interior layout and kitchen design.

For architect Lars Peterssen of Peterssen/Keller Architecture and his partner, author Robert Alexander, it meant they were able to design this top-floor apartment from scratch, positioning rooms and services exactly where needed.

Working with interior designer Andrew Flesher, the couple opted for a modern, yet warm interior that would maximize the expansive lake and city views.

"It can be difficult to make a loft-style space seem warm and inviting, but using natural materials and colors helps," says Flesher. "For this project, we chose an autumnal palette that references the water and the color of the trees in fall."

Peterssen says another key design influence was the open layout that meant the kitchen was beside the main circulation route into the living area. 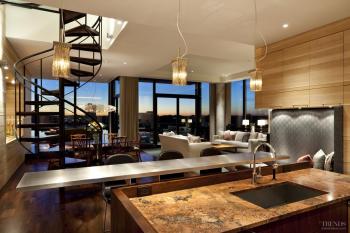 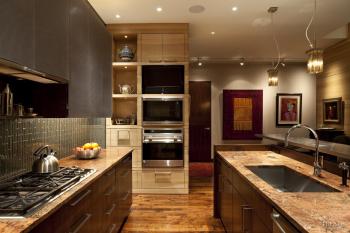 "We chose to give the entry passageway a gallery feel, with artworks lining the walls on one side. On the other side, we placed one of three large objects made from solid rift-sawn white oak, which define the spaces in the apartment. Another large box aligns the opposite side of the kitchen, and a third is situated near the spiral stair that leads to the terrace on the green roof."

The oak cabinetry provides plenty of hidden storage and conceals several of the appliances in the kitchen, including the refrigerator. It also ensures the kitchen is fully integrated with the rest of the apartment.

"We wanted to keep the look as simple and pure as possible, so the oak is laid horizontally and the doors are flush," says Peterssen. "In key areas, we have incorporated niches that look as though they have been carved out of the boxes. These include an upholstered seating nook, shelving units and buffet. The interior wall of each niche is wallpapered, rather than painted, to add an element of surprise."

To provide contrast, the island and rear cabinet feature a stained American walnut veneer, with a vertical grain.

"This veneer has a similar stain to the walnut flooring, so the island appears to grow out of the floor," says Peterssen.

While the countertops are in red granite, the cantilevered bar top features solid stainless steel. The architect says the bar was deliberately extended out one side to distance the kitchen from the main traffic area.

"The bar top was designed so it appears to float. It is a key compositional element, along with the asymmetrical wood surround on two sides of the island. Items don't all line up – they appear to slide a bit here and there, much like the pocket doors that change the interior when open or closed."

Overhead cabinets feature translucent doors, made from fabric sandwiched between two resin layers. The doors sit a little proud of the cabinets, so they appear to float.

"The color matches the glass wall tiles," says Flesher. "Again, these tiles, laid vertically, reference the colors of the lake, and like the water they change with the changing light coming into the apartment."