Out from the crowd

Out from the crowd Discover this article's resources 0

For some people the concept of semi-detached housing conjures up images of banally homogeneous structures lacking independence from their neighbours. For those with a little imagination, however, these houses can be converted from simple to striking.

Architect Han Loke Kwang, partner in HYLA Architects, was given a relatively open brief when he was asked by the owners to redesign this two and a half level semi-detached townhouse.

"The owner's brief was to create a home for a family with children. The number of rooms was stipulated, but I was given some free rein," he says.

Conscious that families need room to live and play, Han says he linked spaces horizontally to create an open living area on the ground floor of the house. To provide a sense of orientation and space, he also wanted to link the house vertically.

The sense of flow begins as soon as you are inside the horizontally slatted front gate. The house almost opens fully on three sides, and Han maximised available space by incorporating the 4m high car porch into the living space. 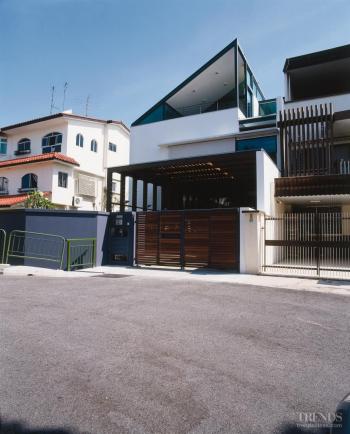 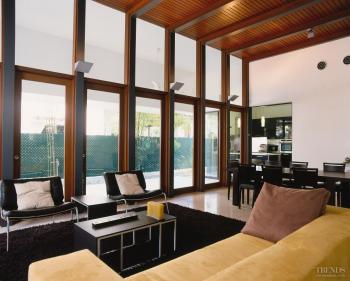 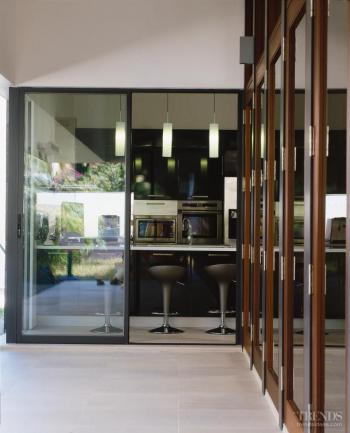 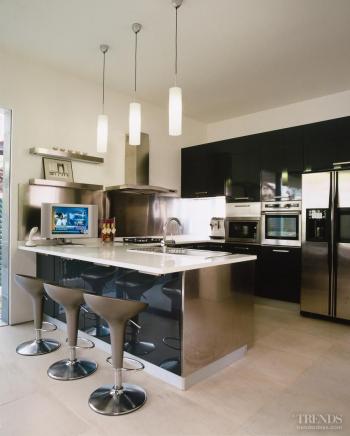 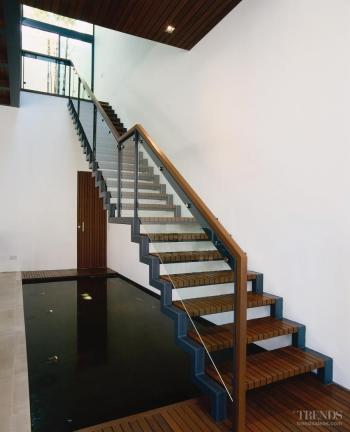 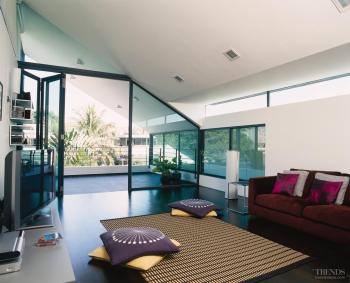 "The car porch and the living and dining spaces form a seamless whole and are separated only by a series of sliding glass doors and a vertically slatted timber screen," says Han.

Sliding the car porch screen provides extra room for entertaining and effectively opens up the whole ground floor for guests to mingle.

Numerous floor-to-ceiling glass doors allow ample light to permeate the downstairs living areas. The owners liked the use of timber, so Han used a local hardwood called Balau to frame the doors and to give a warm aspect to the living area.

The open terrace was designed to give younger members of the family a play area, under the watchful eye of a parent either in the kitchen or living area.

The consistent use of one type of wood throughout much of the house creates a vertical link, says Han.

"Small details such as using small strips of wood on the stairs, which point in the direction of the foot, instead of one horizontal plank, create a directional element."

Adding a sense of nature to the upper levels of the house was something Han kept firmly in mind during the planning process.

"I was conscious of the fact that outdoor elements are often divorced from the upper areas of houses. To counteract this, I aimed to keep the outdoors in."

To introduce light and green foliage into the heart of the accommodation area, Han placed a bamboo courtyard at the top of the stairs on the second level. The courtyard extends up towards a cut-out window in the attic.

On the second level, three bedrooms effectively form an inner core, bordered on one side by an elongated study lined with bookshelves, and culminating with a bedroom at one end. This study is accessible only via the bedrooms.

The children's bedrooms are linked to each other, with the elongated, angle roofed study connected to the master bedroom.

"The bedrooms are interconnected to create a sense of directional orientation, proximity and sharing," says Han.

The theme of keeping the outdoors in is replicated by a skylight in the master bathroom, which is separated from the bedroom by a glazed wall.

In the attic the sloping roof creates a sense of space. The roof provides privacy and definition by sloping away from the neighbouring property, says the architect.

A spacious covered deck opens up the top level and provides views, while large glass windows provide protection from the elements.