The latest structure at Sydney's King Street Wharf features bright orange details, but these sculptural forms have a greater purpose

Let's take a break from green for a moment and talk about orange instead. According to Frank Sinatra, orange is the happiest colour, although it's doubtful that colour psychology was his strongest suit. Traditionally, green is the colour of envy, but as everyone is no doubt aware, it's the colour that has become synonymous with caring for the environment.

At 12 Shelley Street in Sydney, green shares the limelight with orange – the feature colour of American Express House. Developed as part of the King Street Wharf precinct by Brookfield Multiplex, the structure's unashamedly enthusiastic appearance is mostly the result of its exposed orange metalwork – louvres, beams and a series of irregularly spaced blades, known variably as the ‘fishing poles' or ‘chopsticks' – that sit just off the building's facade.

Designed by CoxCrone (a joint venture between Cox Architects and Crone Partners), the structure will add to Brookfield Multiplex's comprehensive portfolio of environmentally rated commercial office buildings, being designed to achieve a minimum of 4.5 stars from the Australian Building Greenhouse Rating (ABGR) scheme. American Express House sits at King Street Wharf between Brookfield Multiplex's 5-Star ABGR rated KPMG Building and the under-construction Macquarie Bank Building, which is pegged to achieve a 6-Star Green Star Rating. The 14,000m2 of commercial net lettable area at 12 Shelley Street is leased solely to American Express for an 11-year term. 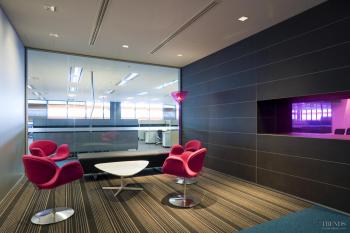 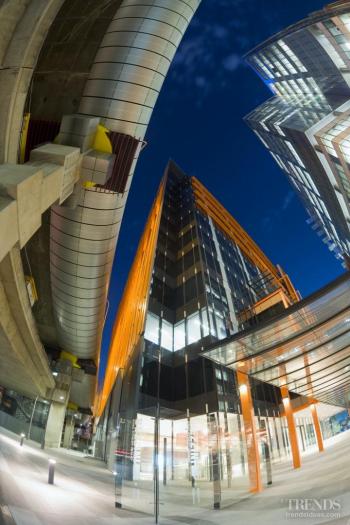 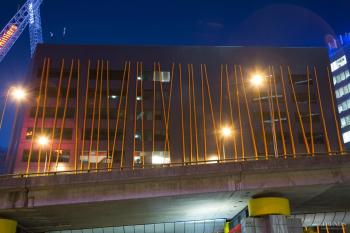 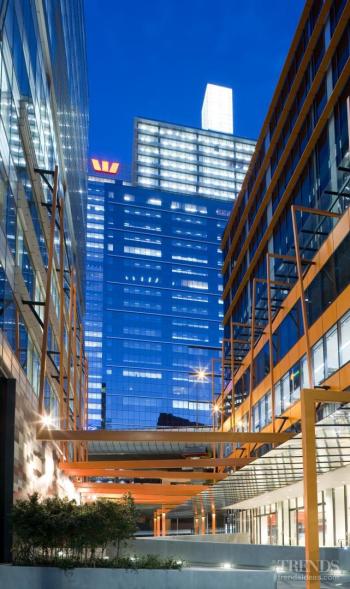 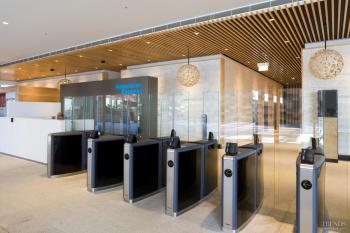 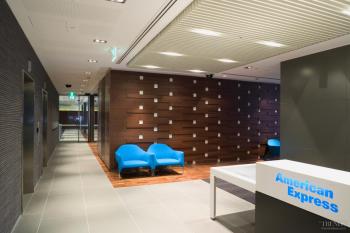 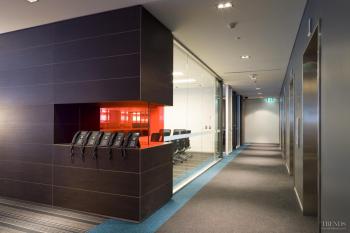 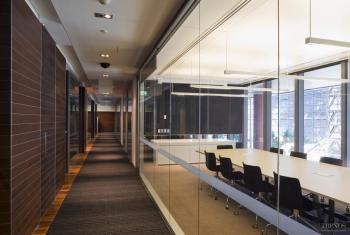 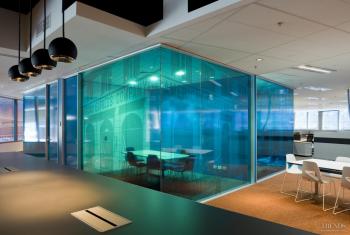 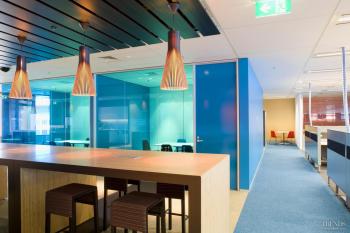 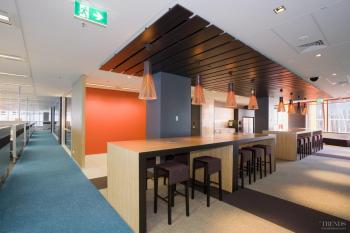 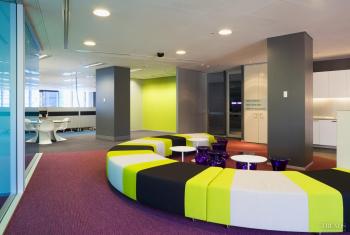 "These include a number of highly visible fixed and operable external sunshading devices on the building's eastern, northern and western facades, which are targeted to the relatively small areas receiving major heat loads, after allowance for the overshadowing effect of adjacent buildings. In combination with high-efficiency lighting and mechanical systems the building is designed to achieve a 4.5-Star ABGR rating."

The sunshading devices include the so-called chopsticks on the building's eastern side, which also play another significant environmental role. Due to the building's location a number of site-specific design solutions were required. One of the most obvious challenges was the proximity of the Western Distributor highway, which passes less than 2m from the structure at its closest point, around levels 3-4. Dealing with the sun's reflection from the glass and into the eyes of the drivers of the 150,000 northbound cars that pass by every day was critical.

"Due to a rare geometrical relationship between the site and the elevated highway there was a major reflectivity issue. In winter, when the sun is lower, there was danger of sunstrike affecting approaching cars. The uphill and corner section near the building accentuated the problem," says Tyrrell.

Overcoming this required a comprehensive study by building scientists Richard Heggie & Associates. Through extensive computer modelling, points on the facade were identified where incidents of reflectivity were greatest. When plotted, as for a contour map, the data allowed the architects and engineers to devise the chopsticks solution, with blades of varying depth, something easily mistaken for mere decoration.

"The problem we had to solve was a very technical one, but when you drive by you don't read a technical solution. Perhaps the orange is partly responsible for that – it connects with your heart rather than your head," says the architect.

For workers inside the office, noise from the highway was always going to be an issue, so double-glazing was essential for interior comfort, and for energy-saving thermal performance. Another important aspect of the design is the interface of the building with its close neighbour KPMG, and the interaction with the outdoor space underneath the flyover.

The area under the flyover and its foundations was designated as an outdoor room, says Demetrius Condos, from Crone Partners.

"The connections to the KPMG building next door include the steel framework that forms the colonnade and supports the awning. These beams stretch out across the plaza and part way up the facade of the adjacent building. A tiled water feature on the same wall provides ambient white noise that helps disguise the noise from the freeway."

The interior fit-out by Geyer introduces a new workplace strategy for American Express. Called Bluework, the strategy is a set of solutions integrating human resources policy, technology and the physical environment to better utilise space and future-proof the workplace, says Laurie Aznavoorian, partner and global innovation leader at Geyer.

"The development of this concept began over a year ago. This Sydney project is the rollout of ideas first pioneered with the American Express property team in Singapore. The ideas were further developed in trial sites in both Singapore and at the company's old premises in Sydney," she says.

A subset of Bluework is Bluework Mobility, which acknowledges a large portion of the company is highly mobile, working at client sites, on the road, or at home offices. The program formalises the relationship between the employee and the organisation, creating consistency in technology, human resources policy and the physical environment. The design of the workspace supports the Bluework Mobility program by having the ability to adjust the way the spaces are used over time. This will ensure desired growth and flexibility objectives can be accommodated over the lease term.

"On day one at the new offices, every staff member will have a desk. However, in five years time as the mobility program is fully integrated, there will be more desk sharing and working from lounge areas, allowing the population to increase without requiring further real estate commitments.

"The workplace needed to support the strengthening of relationships between people, within the organisation and with their client base. As a result the new workplace encourages workers to be more outwardly focused and connected with each other. Also the company needed to be more agile, to respond to different social and business demands," says Aznavoorian.

"Every floor features substantial breakout spaces designed to a boutique hotel standard. These areas are fully wired so they can be used as additional workspaces for mobile staff when desk spaces are at a premium," she says.

For a company like American Express, security is a significant issue. In the previous office building, there was a rigorous security procedure for all guests, and once inside, a staff escort was needed for all areas. In the new building security hasn't been relaxed, but it has been made more user friendly.

"A security envelope allows clients to access certain areas, including meeting rooms and bathrooms. It's possible to look onto the work floor, but because of the way desks and computers are positioned, confidential information remains secure," says Oliver.

To ensure the security of this area, client meeting rooms are positioned around the lift core. There are three distinct interior design concepts for the club areas located nearest the flyover – the area with the worst views; best views are reserved for staff in the open-plan office space. The clubs are near the stairs that connect all floors. The colour schemes and material finishes in these areas reflect geographical areas in which American Express works. The design scheme alternates through every three floors.