Creating an illusion of space may involve morethan simply opening up an apartment's interior and creating sight lines out to views. Clever use of materials on both floors and ceilings can also contribute to this effect.

This was just one of several considerations when architect Glen Jones and team from Space Cubed stripped this apartment back and gave it a completely new personality.

"The client gave Space Cubed an open brief for the project," says Jones. "He wanted something completely different from the original design and part of this was a feeling of space and refinement."

First off, the architect completely reconfigured the spaces. A string of self-contained living areas was turned into one central, expansive room, incorporating the living area, dining area and kitchen. Two of the three bedrooms were merged to create a master bedroom and ensuite.

"We also appropriated outdoor space for the media room and opened out an enclosed room to the balcony adjacent to the media room to create a generous indoor-outdoor terrace," says Jones. 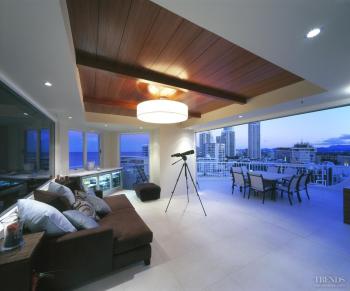 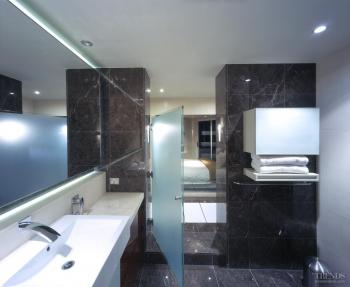 The layout means sight lines from the front door look straight out to the views, and the apartmentis now lighter and more practical. However, Jones also manipulated materials and floor and ceiling heights to further increase the sense of space.

"I know the client personally and was aware that his sense of refinement incorporated the look of high-end materials, such as lacquered timber – much like the finishes found on a super yacht," he says. "Following this idea, we fixed timber panel ceiling panels to the base concrete ceilings."

The timber panels were used on the ceiling of the indoor-outdoor terrace, and again on the central living space ceilings. The repeated panelling helps draw the indoor and outdoor areas together.

"An important consideration for the refit was also to maximise volumetric space," says the architect. "By dropping the ceiling around these panels, the step up to the now recessed darker timber gives the illusion of increased height – even though, in reality, the bulkheads are lower than the original ceiling plane."

This overhead layered effect is furthered by the use of large round light pendants. The lights create another layer, adding to the feeling of height. The lights also appear indoors and out, again strengthening the connection between areas.

"Attention to the floors was another way of making owners and visitors appreciate the rooms in their spacial entirety," says Jones. "The living room features an inset, wool-and-silk carpet and the floor steps up from here to the dining area – the latter floored in four massive slabs of granite."

The slabs are book matched to ensure a matching grain and grouted in an identical tone to visually merge all slabs into one.

"Having set the dining area on high, as it were, we didn't want to downplay the space by having bitsy tiles," says Jones. "We did use 600mm2 tiles for the hall and greater indoor space, but the large areas easily supported the tiles' smaller proportions without diminishing the area visually."

An existing bulkhead and others built in by Jones also play with visual space. Timber beams were introduced, and while they appear structural they are, in fact, a cosmetic inclusion.

"Built-in joinery, some with ten layers of lacquer, chimes in with the ceiling elements and adds to the super-yacht-type finishes prevalent in the apartment. In fact, one entire wall of the living room is finished this rich timber treatment," Jones says. "In the case of the dining area and bar cabinetry, the two units mirror each other across the hall. This creates a pulled-apart look that again draws attention to spacial volumes."