One with the land

Through the creation of a meandering stream and the planting of native flora and fauna, this contemporary home appears established within its surroundings

One with the land Discover this article's resources 0

When building a modern home on a near-empty plot of land, the new structure may appear disconnected from its site. Creative landscaping can help to forge a flow between indoors and out, making a building appear more grounded.

Through the use of a repeated water theme and the planting of mature trees and low-maintenance native shrubs, landscape designer Ben McMaster of Inside Out Design has created a connection between this Blenheim home and its environment.

Before building, the site consisted of a bare paddock with existing vineyards. A small ditch had a minimal, but steady flow of water passing through it, says McMaster.

"My idea was to enhance and widen this ditch, adding jetties and stonework, then to create other elements of water near the house. The climate in this area is very hot and dry, so the water lends some balance."

The ditch was dug out and expanded to create a man-made river. The sides were laid with rocks, and native trees and grasses were planted, providing a sense of permanence. 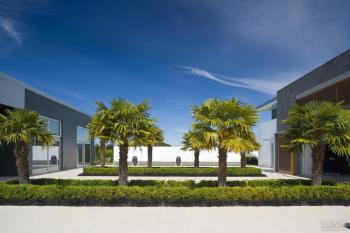 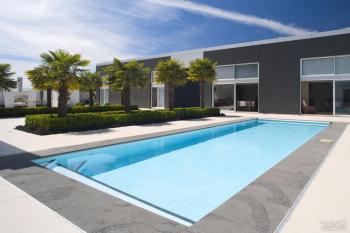 "The only non-native is the weeping willow. To me, this tree speaks of the water. Also, the homeowners had the idea of creating a swing over the river for the children to play on," says McMaster.

Natives planted around the river include flaxes, carex grasses, flowering hebe shrubs and arum lilies, which were chosen for their sculptural appearance, says McMaster.

"The lily is in answer to the homeowners' requests. While they wanted a low fuss garden, they also asked for a pickable flower that would enhance the home's interiors."

A curved concrete wall with a meandering path below echoes the flow of the water. Small jetties give the children a place to launch their canoes onto the water. This area provides a retreat from the home for the family.

Entry to the property is via a stone bridge that was built over the river. The architecture of the house consists of two buildings: a garage and guest apartment in the front, and the family residence at the back. Between the two structures is a courtyard.

"The house is a strong, formidable structure, so the landscaping is designed with the same generous proportions," says McMaster.

The courtyard is sheltered from the wind by thick, white concrete walls, which also sustain a connection between indoors and out, says McMaster.

"To enhance the sense of the courtyard as an outdoor room, I used the same plaster floor tiles as the architect used indoors."

Palms create a central avenue between the two buildings, with box hedging further defining the path. Cream-flowering cliveas beneath the palms add softness to the geometric edges of the courtyard walls.

Adding to the theme of water, there is a reflection pond on the front lawn and a pool in the courtyard. The colour scheme of the landscaping consists of a silvery grey that can be seen in the reflective pond and the pewter pots beside the swimming pool. Some of the planting is also chosen for its silver tone, such as teucrium hedging near the entertainment area and whitebeam trees on either side of the reflective pond.

For visual effect after dark, McMaster designed a lighting scheme in the courtyard. The crenulated walls beside the fireplace can be made to glow green, and the pewter pots can also be illuminated.