Drawn together in a few short months, the new AMI Stadium by Populous provides a much-needed home ground for Christchurch's beloved Crusaders

Together with so many much-loved aspects of Christchurch, the city's primary sports ground Lancaster Park was laid low by the earthquake of February 2011. This was also the home of county rugby team the Crusaders, making the loss even harder. It was recognised early on that one way to rejuvenate civic pride would be to speedily create a new home base for the local sporting heroes – and symbolise the city's recovery and rebuild. However, with the rugby season fast approaching, time was critical. Always playing away had put a strain on the red-and-black team's coffers and also meant Christchurch's beleaguered citizens had no home matches to offer light relief.

Driven by charitable entity the Christchurch Stadium Trust, the City Council and the Canterbury Earthquake Recovery Authority, or CERA, the decision was made to build a temporary, 18,000-seat multipurpose stadium. The idea was to use existing resources from around the country and create temporary stands from scaffolding.

Before the site was chosen, Populous was asked to create generic designs to suit a range of situations – drawing on its experience with Forsyth Barr Stadium and London's Olympic stadiums. After several options and sites were considered, an existing sports field by Addington showgrounds was selected – this was owned by the city council and a resource consent was issued under the CERA legislation due to time constraints. 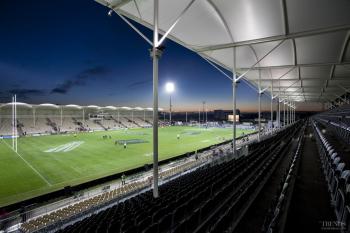 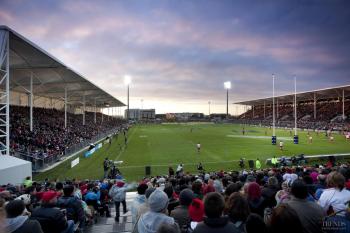 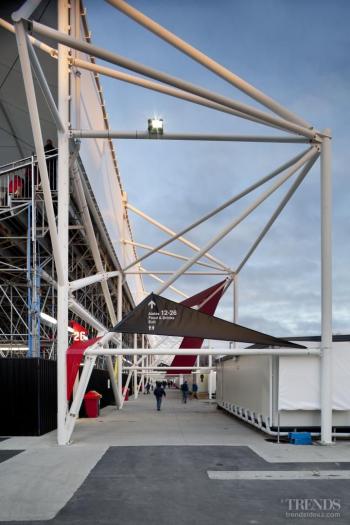 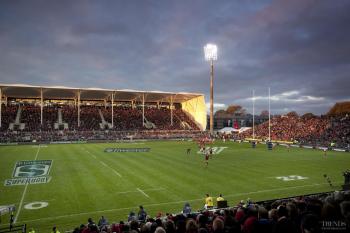 The final design combines modular buildings and lightweight stand structures with a fabric roof, all built to rigorous earthquake-proof standards.

To complete the venue in 100 days, elements were gathered from across the country. Rolled-up turf and goal posts came from Lancaster Park, as did the PA system and giant sports screen. The food and beverage and merchandise portacoms arrived from Auckland's Eden Park and Dunedin's Carisbrook. Four light towers also came from the Highlanders' former stamping ground and were refurbished in Christchurch before installation; as did the coaches' box. The recycled seating came from Eden Park, where it had been used for the World Cup, Christchurch's own QEII Stadium and Mangatainoka – with the balance supplied by Acrow and GL Events.

"In terms of new elements, 13 hospitality boxes were prefabricated off site while the large players' facilities were built at the venue," says Maguire.

With all factors considered, the construction went ahead like a charging Crusader scrum. The grass was rolled out first, as its match fitness was always a high priority. Then came the roofs for the two covered stands and as they went up, the scaffolding and seating were slotted in behind.

The marathon-sprint project involved 340 tonnes of steel for the roofing and gantry structures. In one hectic night, 130 trucks delivered concrete for the platforms under the north and south stands – one of the largest single pours ever in Christchurch.

AMI Stadium has an anticipated life of around five to ten years. The scaffolding stands are not intended as permanent structures. However, when superseded, many facilities will be reused by returning tenants Canterbury Rugby League.

CERA Minister Gerry Brownlee says AMI Stadium will deliver some normality for Cantabrians who have not been able to enjoy large sporting and entertainment fixtures for over a year.

"I want to pay tribute to the over 400 workers who achieved a great result in only 14 weeks by treating the stadium's construction as a personal mission."