On vacation Discover this article's resources 0

Continuity can set a house apart – whether it's a theme or one particular colour scheme that is repeated throughout all the interiors.

In this Balinese-inspired country house, both the theme and the colour palette extend to the bathrooms.

Designer Mark Wilson of Masonry Design Solutions says the house was designed to impart the sense of laid-back luxury enjoyed by guests at a boutique resort hotel. And the master suite was no exception.

"From the freestanding hand-carved marble tub and matching basins to the private garden and terrace, this suite was designed to provide an exotic, tranquil retreat," Wilson says. "But, the sculptured tub most definitely remains the pièce de résistance."

Both the walls and the floor feature porcelain travertine tiles in a calming off-white colour that further enhances the sense of escape. 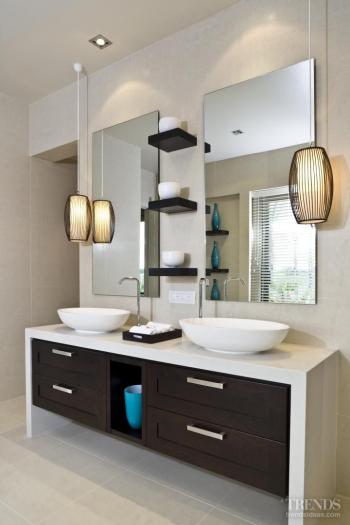 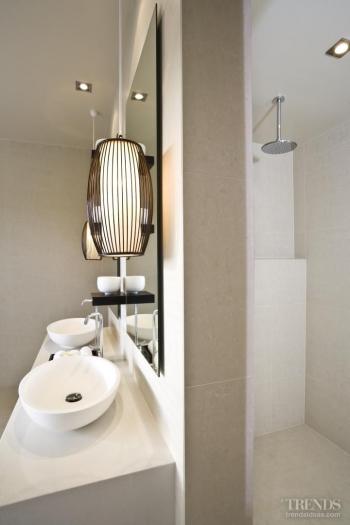 The white tiles and the CaesarStone Osprey vanity top are contrasted by a dark chocolate-stained American white oak vanity unit and shelving.

"The dramatic contrast provided by these two colours gives the space a very contemporary look and a distinctive resort feel," says Wilson.

Other modern treatments include the suspended mirrors, which appear to float a few centimetres in front of the wall. The designer also introduced niches in which to display decorative items.

"Even the towel ladder sits in a recessed area, so the line of the wall retains its sleek, smooth look," says Wilson.

Functionality has not been at the expense of aesthetics, however. The toilet is hidden behind the wall backing onto the vanity unit. The shower is also behind this wall, but accessed from an opening between the vanity and tub. The shower wall features niches and shelves to store accessories and products.

Sliding doors open up the bathroom to a private terrace and landscaped garden.