On the wings of imagination

On the wings of imagination Discover this article's resources 0

From JK Rowling to CS Lewisthe books that stay in our hearts long after childhood has passed are those that inspire our imagination with visions of living in a secret, magical world in which all is not as it seems. But for most of us, all too soon, the mundane duties of adulthood render these fanciful notions obsolete; nothing more than pleasant memories.

In Northern California, the owner of this house, in close collaboration with interior designers Walter and Kirsty Burns and architect Ed Buchanan has successfully translated the whimsy of a fairytale into this adult retreat.

In the home's master bathroom, a large armoire conceals the entrance to a two-story tower-shaped structure. Opening the double doors activates an automated sequence of lighting effects and reveals a passageway into a private sitting room. Furnished in a traditional style similar to the main house, there are imaginative touches throughout that personalize the space.

"Some of the architectural elements had been sourced before construction began," says Walter Burns. "The tall ornate arched panel that hides the wet bar came from the estate of Hollywood mogul Jack Warner. That and the fireplace were the starting point for the dimensions of the tower and for the overall look of the paneling on the lower level."

Architect Ed Buchanan had to take into account not only challenging external factors, such as the steeply sloping site; but also the numerous hidden interior features that make these rooms special. 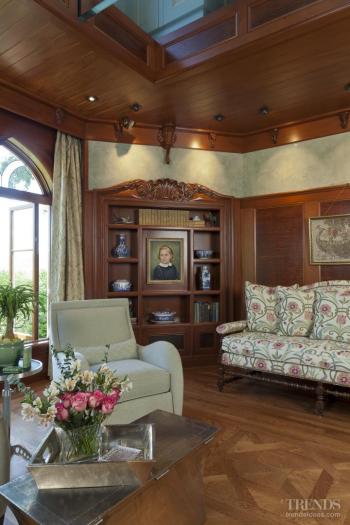 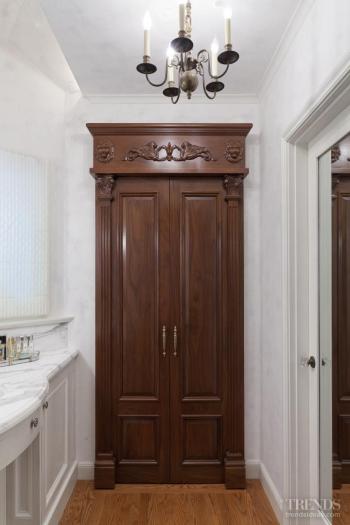 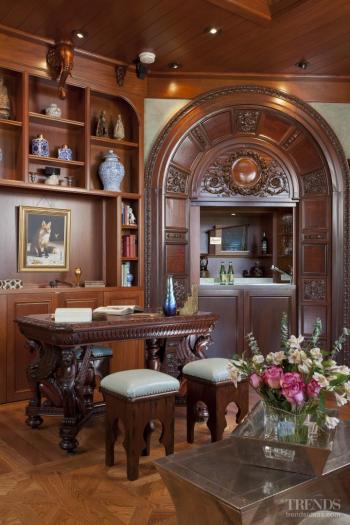 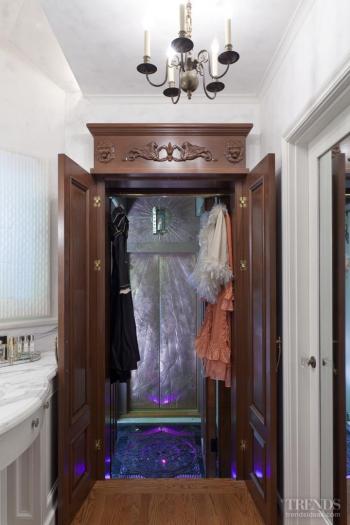 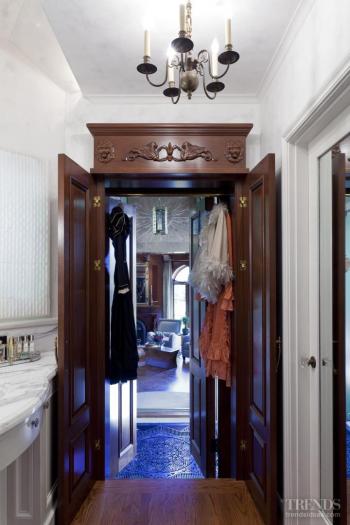 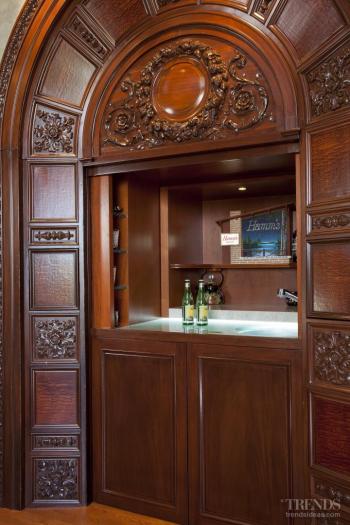 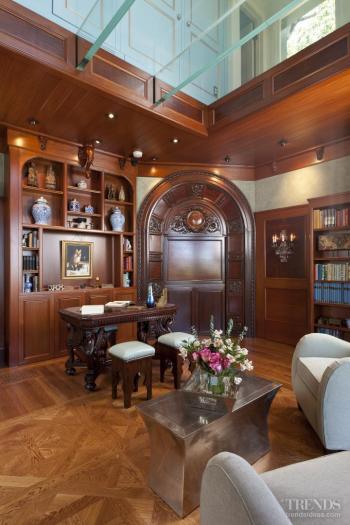 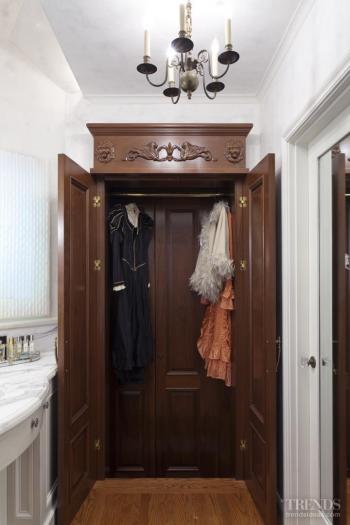 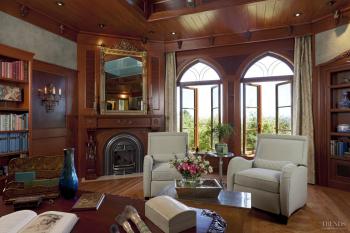 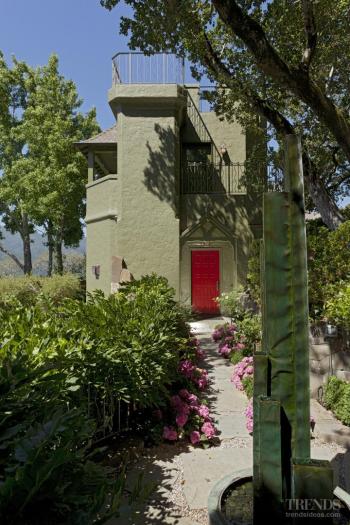 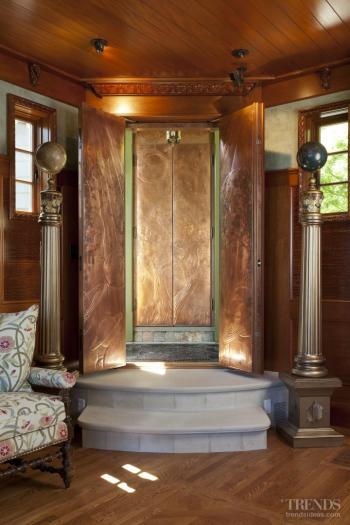 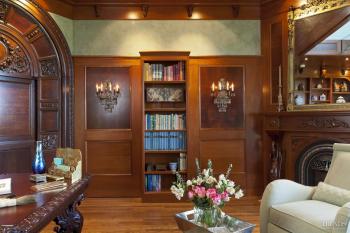 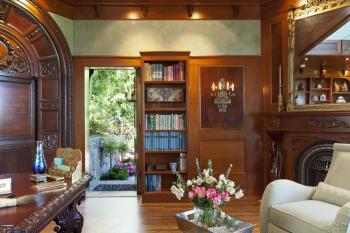 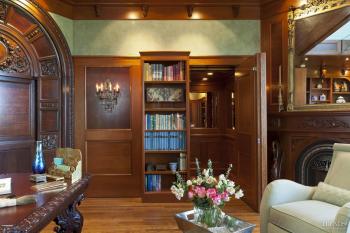 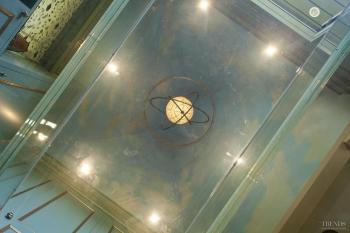 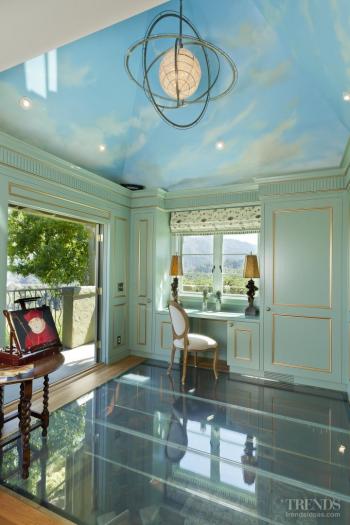 The wealth of traditional detailing and clever design work together to conceal modern technology that allows the most imaginative ideas to become reality. Floor-length curtains sweep across the arched windows at the touch of a button; and they also quickly slide back out of sight, retracted into narrow cavities hidden by the fireplace and the bookcase on either side.

Behind the writing desk, a panel is hung with a painting of a fox and a hummingbird: both creatures that play a part in many a fairytale. Touch a button and a flat-screen TV rises in front of the painting.

Another case in point can be seen – or not – on either side of a slim bookcase. Detailed with sapele wood insets and ornate crystal sconces, these panels are actually concealed doors. The individual latch mechanisms are disguised by two books on the adjacent shelves. The door to the left opens to a walled garden, while the right-hand door reveals a small elevator to the upper level.

Burns says, "Along with the mechanical aspect of these two books activating the switches that open the doors on either side, there's also the fact that each door had to be wired for its lighting sconce, and we needed to allow room for the door, with the sconce, to swing out smoothly."

The crystal fixtures attract the eye, drawing attention up and away from any signs of the panels' true purpose.

The secret elevator rises to the upper level of the tower. Here, the walls are lined with wardobes and cabinets, topped with a formal dentil moulding. In contrast to the study below, a more ethereal mood is created by the soft robin's-egg turquoise and sky blue paint colors, enlivened with gold-painted details.

Flooded with natural light, this space serves as a painting studio, and the cabinets lining the walls store the large collection of theatrical costumes the owner has acquired.