On the up and up

Mixed-use developments are at the forefront of urban renewal, and increasingly, they form part of a masterplan that establishes a city's vision for the future

On the up and up Discover this article's resources 0

In years gone by, most cities were developed on an ad hoc basis. Land was acquired and new buildings went up, but with the exception of some relatively new cities, such as Canberra, there was seldom any masterplan for the urban centre.

Today, most city councils have a much stronger vision, and an appreciation of the need for a design blueprint that determines the direction that future developments will take.

The Adelaide City Council, for example, acquired the 3ha site formerly occupied by Balfours Bakery and put the development to tender, with an overriding objective to foster high-quality urban design. The tender for the Precinct was won by Urban Construct and Brookfield Multiplex, with a design plan developed by Woodhead Architects, Adelaide and Denton Corker Marshall, Melbourne.

"The council required a design masterplan for a mixed-use residential and commercial development – an active-edge urban design that would include pedestrian links from north to south," he says. "The development also needed to address a number of key environmental issues." 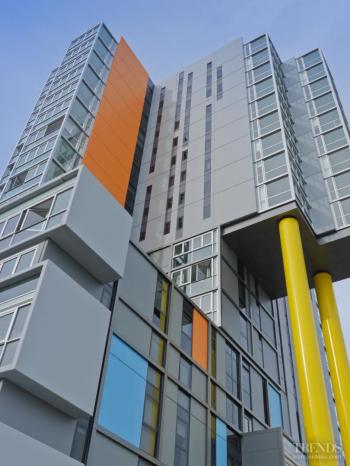 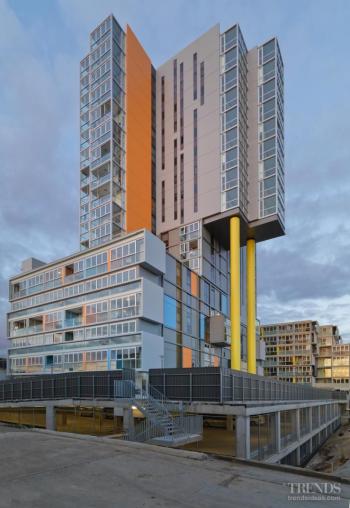 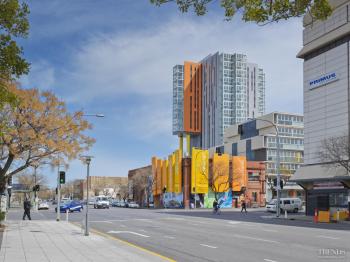 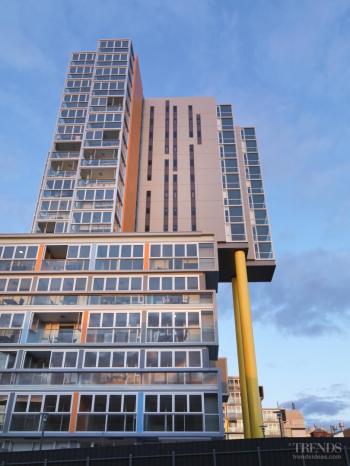 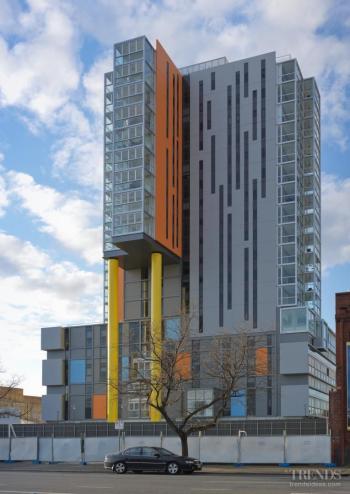 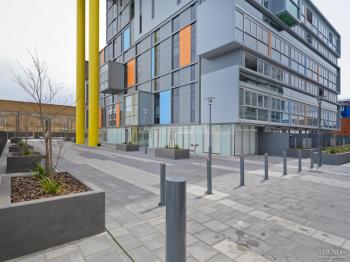 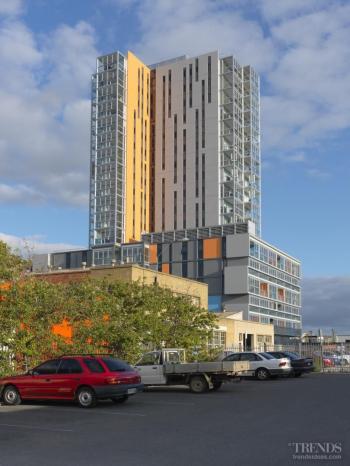 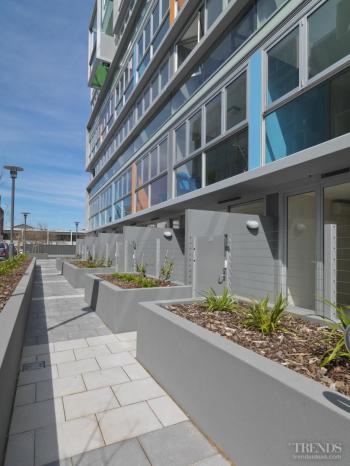 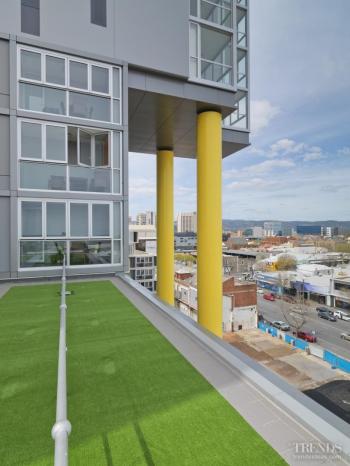 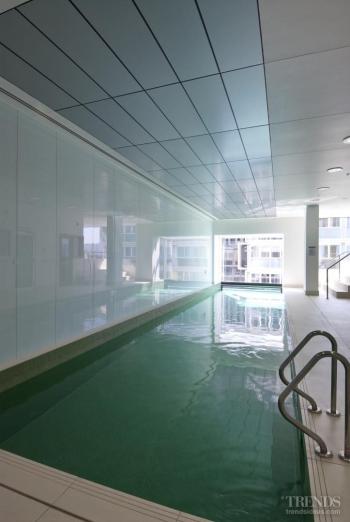 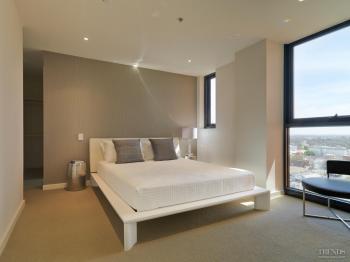 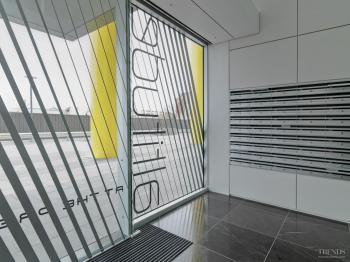 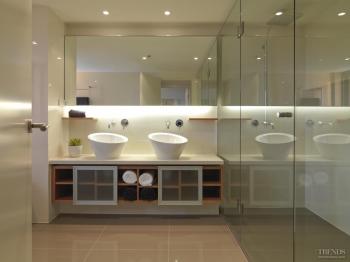 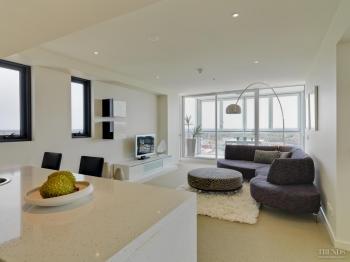 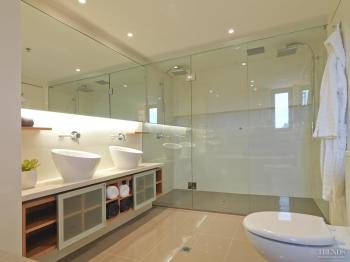 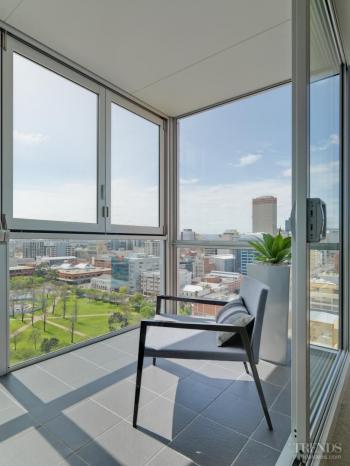 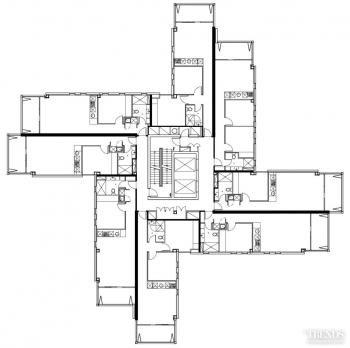 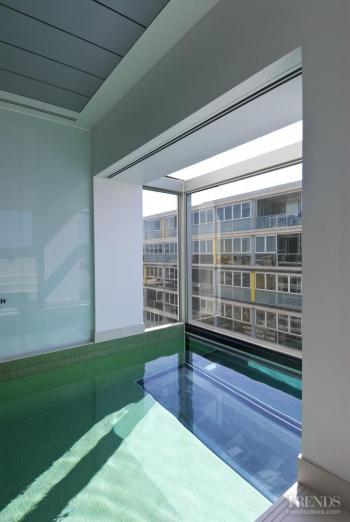 King Jones says the urban form of the Precinct is starting to be realised with the completion of the 18-storey Altitude residential tower, shown on these pages. This follows the opening of the Gallery – the first mid-rise development.

"Altitude was not only designed to give the Precinct a strong visual identity, but also to reinforce Adelaide's rectangular street grid," the architect says. "All the buildings in the Precinct are aligned with the streets and public walkways."

King Jones says the Altitude tower underpins the visual language of the Precinct. As well as its semi-industrial urban architecture and a modular-style podium reminiscent of container terminals, the project introduces distinctive colour elements.

"This language of strong colours will be further developed right across the site," he says. "On the Altitude tower, the colour enlivens the facade, and the bright yellow columns, or cheesesticks, give the building a strong sense of identity, strength and verticality. Similarly, the coloured precast concrete panels define key elevations. With random vertical glazing and spandrel slots, these panels further enhance the tower's verticality and avoid a facade of repetitive windows."

Altitude's architectural form establishes another key design direction for the Precinct. The building's cruciform shape evolved as an environmental solution to the need to provide plenty of natural light and cross ventilation to every apartment.

"The building has a pinwheel plan that means almost every room has windows on at least two sides," says the architect. "This allows a lot of natural light and air into the building, and maximises the great views. And, visually, it makes the tower more accessible and friendly – it is much less bulky than a typical square building. The slender volumes appear to slip past each other."

King Jones says although this design was more costly to build, due to an increased amount of curtain wall, there are long-term efficiencies for residents in terms of energy savings.

The architectural team also provided fully glazed covered balconies to each apartment, which offer both practical and aesthetic benefits.

"The steel edge to the balcony glazing gives the extruded arms of the tower a filigree edge – there is a lightness and delicacy that you don't get with concrete columns," says King Jones.

"With adjustable bifold glazing, these sun rooms can be controlled by the residents, creating an ever-changing pattern on the facade."

Because they are fully glazed, the balconies are also more likely to be used, the architect says.

"Many people won't use exposed balconies on high-rises, because they feel uncomfortable. But these are essentially indoor spaces. Furniture doesn't need to be rain resistant."

Spacious, contemporary interiors continue the modern feel of the development. The pinwheel design not only ensures there is plenty of natural light and cross ventilation, but also ample wall space for artworks.

Other key amenities include a cantilevered glass-bottom swimming pool in the sixth floor, and a sauna and steam room. These facilities will form part of a recreational deck traversing the Precinct, which will include a gym, outdoor pool, bowling alley, DVD theatre, library and club.