On the street Discover this article's resources 0

When the offices and open-plan spaces of a business cover a large floor area, the various departments can seem disconnected from each other.

Advertising agency McCann-Erickson took over a large space once occupied by a textile manufacturer. Architect Bruce Craig and interior designer Guy Richards of New Improved were commissioned to come up with a layout and design concept that would create private offices, open-plan areas and spaces where staff could meet and mix together.

"The agency wanted an inexpensive but funky fitout, so we took the idea of a streetscape with a footpath through the middle of the space. There are forms on either side that represent city buildings, some plastered with billboards," says Craig.

The agency occupies an entire floor. Visitors arrive by an old industrial lift from the car park or by the main staircase and come into the reception area, where one wall is covered in a computer-generated graphic inspired by a Pantone colour chart.

The street runs from reception through the centre of the building, past various meeting rooms, open-plan areas and private offices until it reaches a spacious open area at the far end. The "footpath" of the street is created out of a rubber mat made from recycled car tyres. 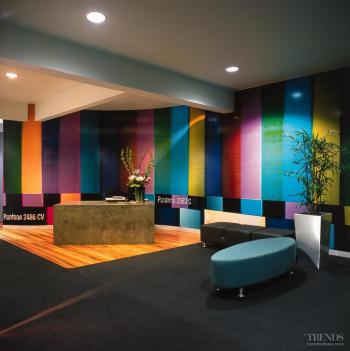 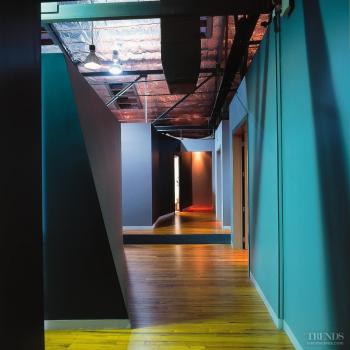 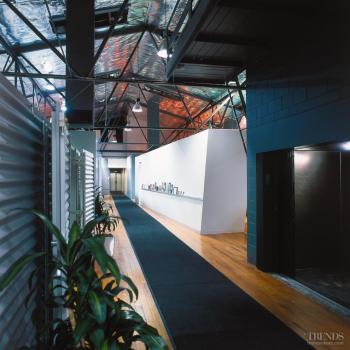 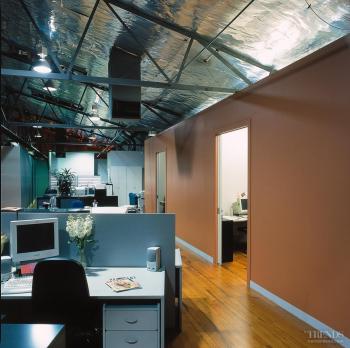 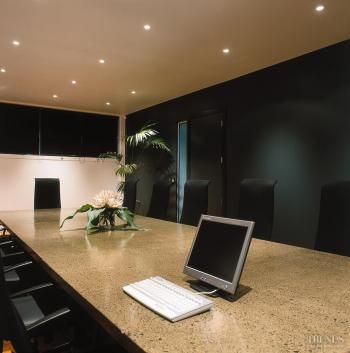 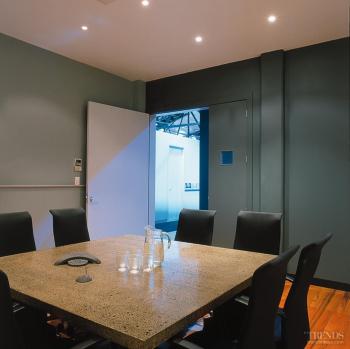 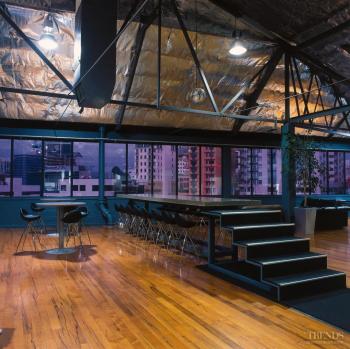 "Along the street we used a conglomeration of various shapes extending from a curved wall at one end, so the experience is like walking past a whole row of tall city buildings," says Craig.

Private offices and partially open-plan areas are accessed from the street. The open-plan work areas are subdivided by corrugated iron screens. For private meetings, there are several smaller conference rooms as well as a large boardroom.

The street culminates in a large space known as the time-out area, which is used by staff as a lunch room. It also doubles as a client function space with a long table in the centre. Steps leading up to the tabletop mean it can also be used as a podium or for guests to dance on at parties. This space is also equipped with computer power points, so visitors to the offices can hook up and work.

The design focuses on an industrial palette of steel, corrugated iron partitioning and polished concrete for the reception desk, time-out and meeting room tables. The reflective foil lining the roof has been retained throughout most of the space and tones of grey and blue on the walls continue this theme.