Inner-city building sites don't always conform. Generally, you have to work with what you get in terms of size and shape, which was precisely the challenge facing the developer of the GHD Centre in Auckland.

Gary Young, construction manager at Mansons TCLM, says the company took over the project at the resource consent stage following a liquidation.

"Because resource consent had already been given we built it pretty much to the existing plan," he says. "The design worked with the curved shape of the site, which was the result of some of the land being taken by Transit New Zealand to develop the neighbouring tunnel."

As a consequence, a long, curved glass facade facing northeast follows the sweep of the adjacent motorway. On the opposite side, the facade features tall louvre-style fins that wrap right around the narrow end of the building. Young says the fins are positioned to provide privacy for neighbouring residential properties. However, the office interior is arranged to ensure workers can enjoy view corridors between the blades in another direction.

Also on the northwest side of the building, the first-floor offices – tenanted by Lion NZ – push out towards the boundary, providing enough space for a deck above. This forms part of the GHD fit-out. 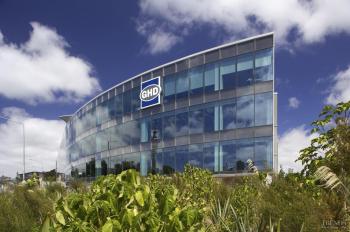 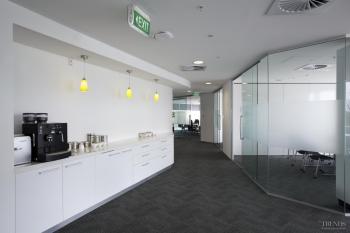 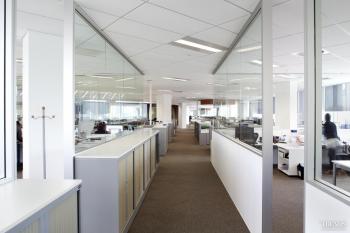 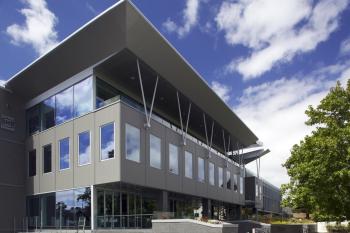 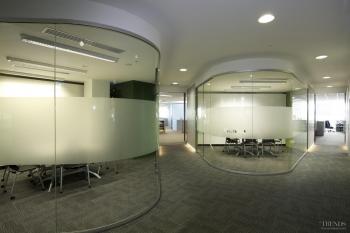 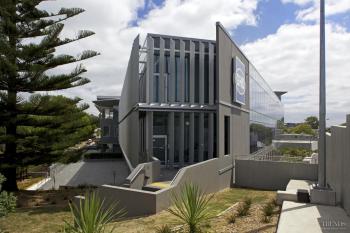 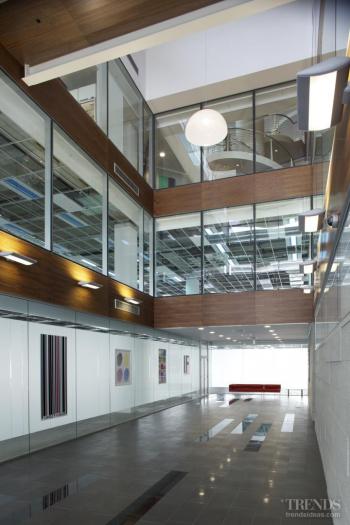 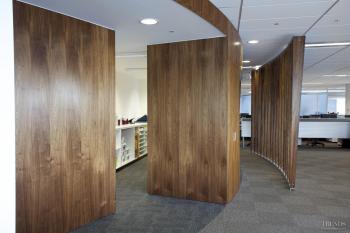 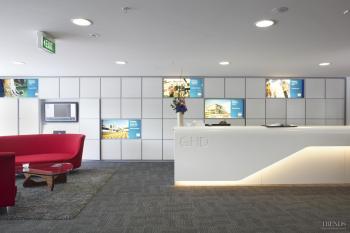 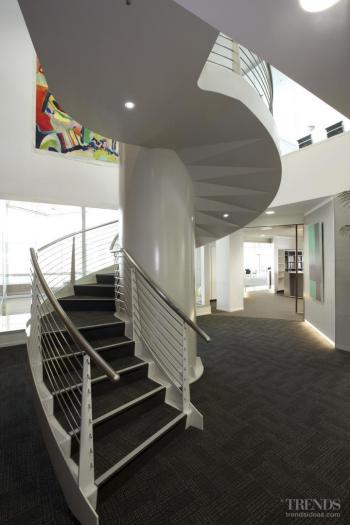 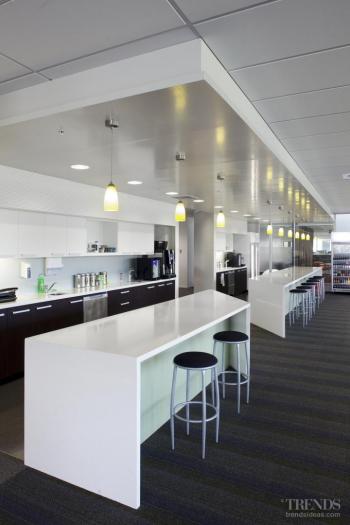 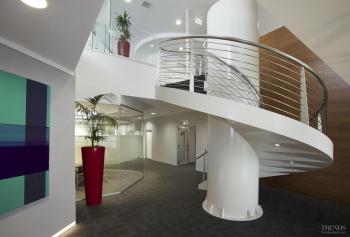 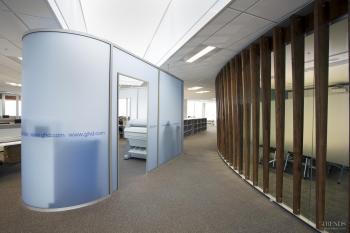 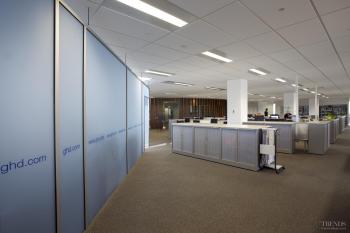 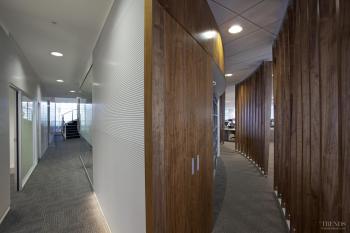 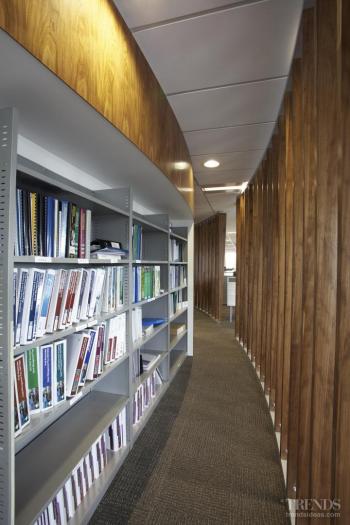 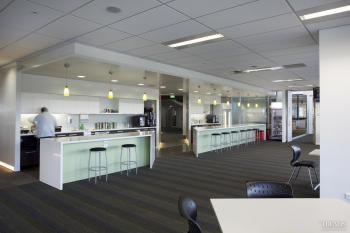 Sustainable design initiatives feature throughout the build and include low-e, high-performance double glazing, energy-efficient lighting and the introduction of plenty of natural light through a large atrium. The project has been awarded a 4-Star Green Star rating for Design and is expected to achieve a similar As Built rating from the Green Building Council of New Zealand.

For global engineering, architecture and design firm GHD, the move to new premises involved the merger of staff from three separate locations. Architect Ben Lowe says this was a complex, logistical exercise, which involved decanting staff over six weekends to minimise disruption to operations. This was managed in house by GHD fit-out co-ordinator Frances Brixey.

However, the merger provided GHD with an ideal opportunity to canvas staff about their concerns and preferences, and customise the workspace to best suit their needs. All these comments were collated, discussed and prioritised among the design team.

The architect says the fit-out needed to reinforce the merger by providing an interactive workplace with a seamless link between the two floors occupied by GHD – Levels 2 and 3.

"Because Level 2 has the larger footprint, this became the main work area, while Level 3 was given over to client services. The reception area is on Level 3, along with client meeting rooms."

To convey the scope of the work undertaken by GHD, the reception area includes a modular wall featuring backlit light boxes that are used to display different sectors of the business. These can be changed regularly. The rest of the wall provides concealed storage.

An extra-large spiral staircase linking the two levels provides the focal point for the office.

"There can be a disconnection in the workplace when you have staff on two levels," says Lowe. "The spiral staircase provides a fluid, seamless link between the floors. It also opens up the space, and while we may have lost floor space to the stair, we have gained in other ways. The stair is visible from the atrium, so even when you enter the building and look up, you can see the layering and know the office is over two levels."

Lowe says the company also introduced a bridge across the atrium to link both sides of Level 2.

"The bridge forms part of the main circulation route through the office. With the glass walls to the atrium providing transparency, this circulation is clearly expressed from all sides – people can see where they are going and how the office connects."

On the main level, workstations are positioned around the perimeter of the building, with the core housing glass-walled meeting rooms.

"Solid timber is used to express the circular core and collaborative areas, while a secondary layer of timber fins screens this circulation area and provide a sense of separation," says Lowe. "The screens echo the curved form of the floorplate, wrapping around the office to enclose the core. The wood is also a visual link with the base building, which has a similar material palette."

Other key features of the workplace include a staff room on the main floor that opens out to a large terrace with a leafy outlook.

Sustainability was not overlooked either. In recognition of the building's 4-Star Green Star rating, and in keeping with GHD's own objectives, the interior was designed for energy efficiency. Environmentally friendly materials and products were specified, and bicycle racks, showers and shuttle buses were also accommodated.