This house links to its beach community, due to an open layout and a nautical theme

On the lookout Discover this article's resources 0

Some towns or neighborhoods have a definite atmosphere. It is not uncommon to hear people describing places as rough, easy-going, or even pretentious. Attitudes about an area can come from the people who live there, its history or sometimes the weather.

The atmosphere in Manhattan Beach, California, where this house is located, is both casual and relaxed – perhaps because of the generations of surfers who have lived in the area, or it may be an outcome of the culture that surrounds beaches in general. Either way, this easy-going attitude can be seen reflected in the architecture.

This house, designed by Dion McCarthy and Mark Kirkhart of DesignArc, is no exception. As it fronts a popular walk-street, the architects used the relaxed community feeling of the area as a design theme for the home, says McCarthy.

"The walk-street is always busy with walkers, skaters, and children riding their bikes. The lower floor of the house can be seen as an extension of this. A large rumpus room opens onto a patio, level with the street." 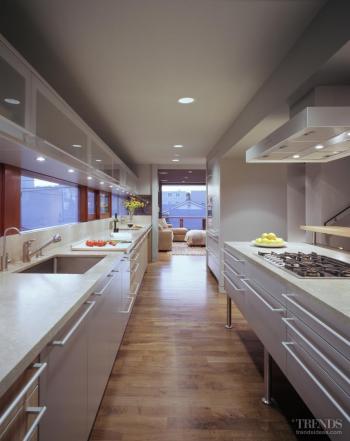 "The kitchen, dining and family rooms are combined, resulting in a casual, open area – made more open by the narrowness and height of the space. It has the vertical quality of a sail," he says.

Along with the thick exposed beams seen in many rooms, the roof of the house also adds to the nautical theme. Sloping inwards towards the center of the house, it appears from outside to be much like an inverted sail. This has allowed for a double-height ceiling in the living room at one side, and a level of privacy on the other side of the house, which faces the neighborhood.

"The galley-style kitchen on the central floor runs along one wall of the open-plan living area. A horizontal window is the same length as the countertop, around 30ft long. This takes the visual mass out of the kitchen counter, as the eye is drawn beyond it," says McCarthy.

While the island is central to the room, the architects did not want it to appear imposing. They chose an island with legs, to achieve the look of a piece of furniture. The island also interacts with a structural column, making it seem more integrated into the space.

"The layout of each floor is what we call a barbell design, with an open space in the middle and two separable areas at either end. On the central level, a den is located beyond the dining table. Pocket doors enable this area to be closed off from the dining and kitchen," says McCarthy.

The living room at the opposite end opens onto a deck that overlooks the walk-street. A circular mirror in this room relates to the idea of a porthole. Beneath the mirror, the limestone hearth continues along the wall and becomes part of the landing for a set of stairs, which begins at the front door and continues to the master bedroom above.

"It is a fire safety requirement in California to have a second staircase in a three-story home, but we chose to make this an intimate element. The homeowners can go straight to their bedroom from the front door without moving through the rest of the house," says Kirkhart.

As an extension of the idea of the central floor as a sail, the upper floor can be seen as a crow's nest, says McCarthy.

"In contrast to the two lower floors, which are closely connected to the neighborhood activity, the master bedroom opens onto a small deck and looks over the rooftops. There is a feeling of separation."

The master bathroom design is a testament to the casual, community feel of Manhattan Beach. A mirror the same size and shape as the window opposite reflects the view across the neighborhood. When inside, there is a sense of being encompassed by an easy-going, beachside community.