This home was built on a very compact site, requiring the architects to tread a fine line between the owners' needs for their new home and what was actually possible

On the edge Discover this article's resources 0

Choosing to build a new home in a built-up, exclusive suburb can mean settling for a site that is less than ideal. While the suburb itself may have huge appeal, sites may be small, have an awkward topography, or have very limited parking.

This new home, built on an extremely steep cliff in an exclusive sea-side suburb, is a good example. Architect George Bensen says the owners loved the site, but were concerned it wouldn't be able to accommodate a large family home.

"The site was small, but we were able to create enough living space by building a three-level home that stretched the width of the site," he says.

The homeowners needed a large home, as they have three teenage children. The three-level design meant Bensen was able to include three generously sized bedrooms with ensuite bathrooms for the children, a master bedroom, guest bedroom, and plenty of living and dining space, both indoors and out.

As the site is narrow, the home is much wider than it is deep. There are almost no windows at the back of the house, so it effectively has only one elevation. This design not only suits the site, but makes the most of the views. 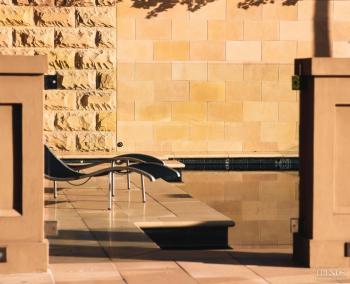 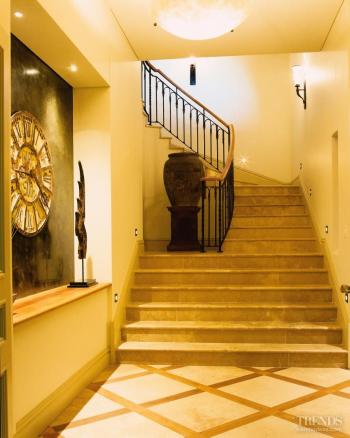 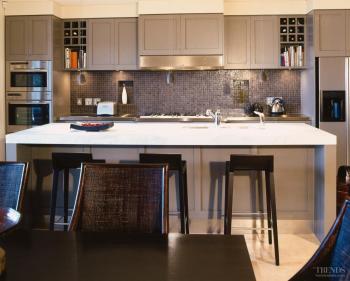 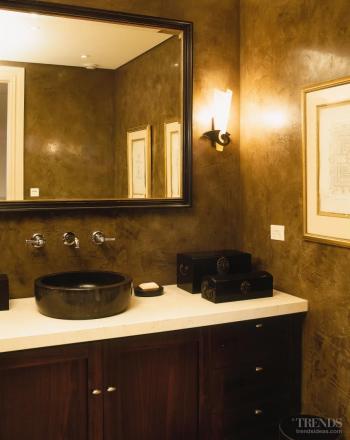 "Whilst the shape of the block was awkward, it has proven to be an advantage as all spaces in the home can enjoy a harbour view," he says.

One of the major downfalls of the site was that there was no off-street parking, and the closest street parking was a long way from the house. A huge excavation meant a garage could be built underneath the house with enough room for up to eight cars.

While the home's formal entrance is on the ground floor, most people enter from the garage, so this entry also needed to be spectacular.

An infinity edge pool sits atop the elevated podium created by the garaging, with the home nestled into the cliff behind. A lift in the centre of the building services all levels, including the garage, as does a grand, curved stone staircase.

In terms of the home's style, the owners wanted to create a colonial look.

"They wanted a building that had a Singaporean Raffles feel about it – a tropical feel with plenty of outdoor living spaces," the architect says.

The style was adapted to suit the environment, as they soon realised some traditional features would not work in this location. For example, they decided not to use wooden shutters to protect the home from the harsh sun, as they were too cumbersome and would restrict the sea views. Instead, they chose simple blinds.

Another concession to the cooler environment was to include an outdoor fireplace on the main balcony so it could still be used in the cooler months.

The home's interior designer Meryl Hare chose the colour scheme for the home's exterior. She says colonial-style buildings are often white, but this wouldn't have fitted well with the surrounding environment.

As the home backs right onto a sandstone cliff, she decided on earthy tones. The subtle colours were also chosen to complement a neighbouring mustard-coloured house.

The colonial style is continued inside the home.

"The homeowners aspired to a kind of colonial architecture, and they wanted that to be reflected inside, too. It was important that it should be comfortable, and that it should reflect their lifestyle and taste," she says.

The owners travel often, so they wanted to include items bought abroad. Hare says the resulting eclectic mixture of objects fits well with a colonial style.

"A colonial style is in fact eclectic in nature. For example, a French colonial building in India will often be decorated in an Indian style. So I think this house lent itself to that kind of collection."

Balconies have colonial features, such as ceiling fans, shiplap ceilings, and bamboo outdoor furniture. Outdoor cushions are made in water-resistant fabrics, and bright throw cushions add splashes of colour.

For the dining room and adjacent living area, the owners wanted to create a formal atmosphere, but also didn't want it to be uncomfortable. The use of earthy tones help to create a more relaxed atmosphere, as does contrasting rich fabrics with more rough-textured fabrics. These rich fabrics also help to give the home a sense of warmth.

"The house is a grand, substantial home, and the richness of the fabrics was important to make it feel cosy and warm," Hare says.