On a clear afternoon

Minimal furnishings in this apartment draw attention to the generous spaces and dramatic, animated outlook

On a clear afternoon Discover this article's resources 0

The temptation when faced with a large, open living space is to see it as an opportunity to find places for all your favorite pieces of furniture, art works and other interesting objects.

When project architect Thomas Meyer and project designer Kristilyn Vercruysse of Meyer, Scherer & Rockcastle (MS&R) were asked to remodel this loft-style inner city apartment, they saw the potential of the space. Occupying the entire ninth level of the nine-year-old Humboldt Loft Building in Minneapolis, the apartment had good bones, says Meyer.

"The structure was well designed when it was built, with high ceilings, exposed raw concrete floors and ceilings, and plenty of big windows, but the original fit-out didn't really take full advantage of the interior space or the fabulous position," he says.

"On the interior our role was to bring out the best from the loft, in a series of subtle ways. We added a new lighting system, relocated a few sprinkler pipes to tidy them up, introduced a canopy over the kitchen to house acoustic panels, and added a black steel fireplace to create a feeling of warmth."

The main living, dining and kitchen areas form a single, large, open-plan space. The master suite and second bedroom, not part of this redesign, are to one side, and a third bedroom has been converted into a media room and office with built-in cabinetry to accommodate computers, television, and stereo equipment. 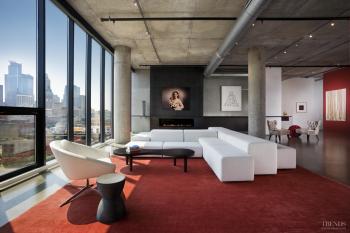 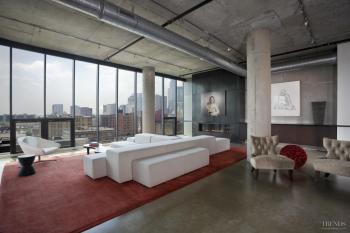 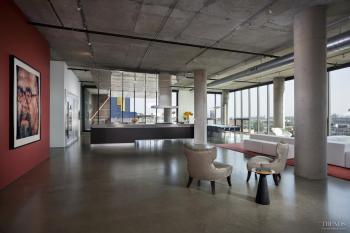 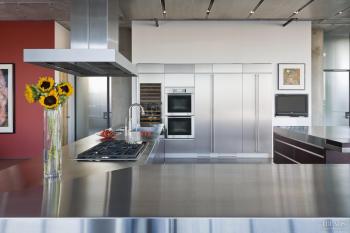 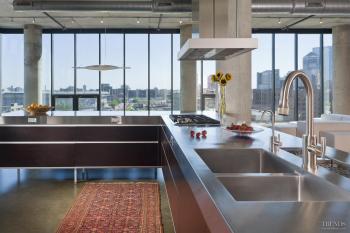 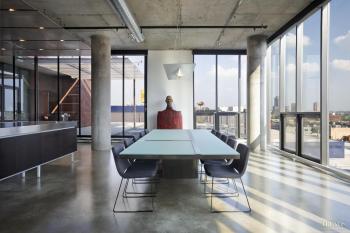 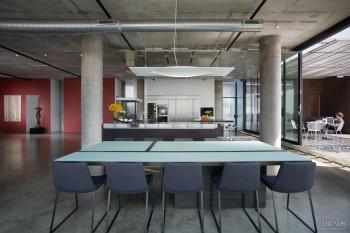 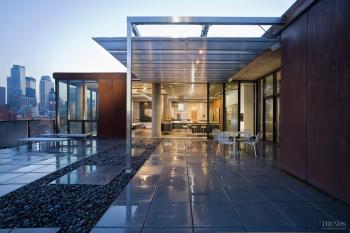 To maintain the appearance of volume and generosity of space, Meyer says they used a very simple color palette, and kept furnishings to a minimum.

The gray of the concrete floors, columns and ceilings is a foundation color that is lifted by the black fireplace and window frames.

"These neutral tones bind the space together, while splashes of color are introduced with a few carefully chosen items, such as the rugs, the art, and the views," says the architect.

Key pieces, such as the modular white sofa on the red rug, the kitchen under its canopy, and the large dining table, create simple compositions within the wider space, without cluttering the living area and making it seem smaller.

Even the owners' art collection has been pared back. Instead of hanging everything at once, they select a few pieces to display and rotate them from time to time.

The owners enjoy cooking and entertaining, so the kitchen was designed as a large, open feature in the center of the space, delineated by a canopy made from very thin, closely spaced sheets of stainless steel.

"Because the kitchen is an integral part of the overall living area, it had to meet the standard and style of the rest of the space," says Meyer.

To take advantage of the position – which has dramatic views over the city and towards the new Guthrie Theater, designed by French architect Jean Nouvel – the architectural team removed the single door that opened onto the roof terrace and replaced it with floor-to-ceiling glass sliding doors.

"As well as creating a strong feature in the apartment, these doors help to link the indoor and outdoor living spaces. A canopy, in the same material as the canopy over the kitchen, was then built over part of the terrace to give definition to the outdoor room in the larger space and to provide shade, as the apartment gets all-day sun from the south and east," says the architect.

"Our objective was to keep the space serene, well proportioned and well crafted. "