There can be no competition when it comes to the sheer grandeur of the Remarkables, the awe-inspiring mountain range set against the sparkling blue waters of Lake Wakatipu. But a new house in Queenstown challenges every preconceived notion of alpine architecture.

Jagged Edge defies convention – there are no gabled rooflines, and there is no framing of the view from a house nestled back into the hillside. Rather, the house steps forward to become an intrinsic part of the view. With fully glazed walls soaring to a height of 9.2m at the sharp end, it is possible to see straight through the house, which at times makes it near invisible, says owner-developer Julian McPike.

"It is difficult to see the house from the other side of the lake," he says. "The glass blends in with the trees and the mountains and the building simply vanishes from sight."

The pyramid form of the glass pavilion echoes the fractured nature of the mountain peaks – a feat only made possible by the tension structure. Ten steel roof bars that resemble cables connect to six 20m-long rock anchors to support the building, which is exposed and consequently subject to a high wind loading.

A steel portal at the front of the pavilion is also instrumental in carrying the load of the facade. The portal frames an opening out to a cantilevered terrace and an elevated infinity pool lined with stainless steel. 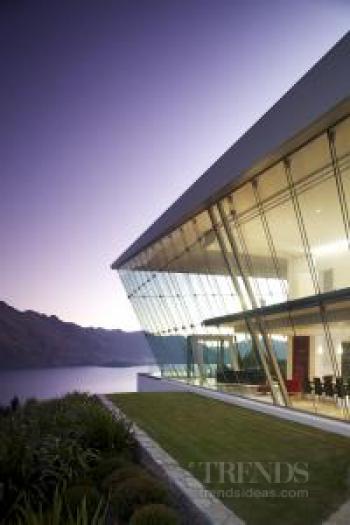 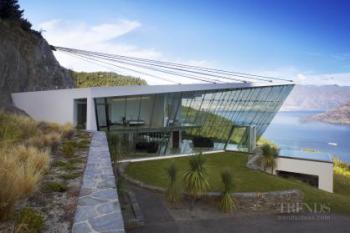 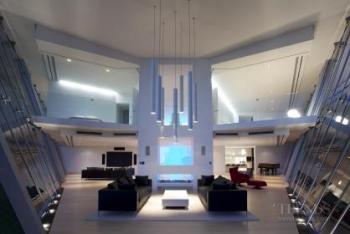 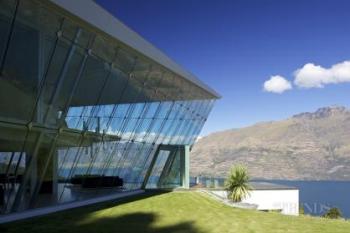 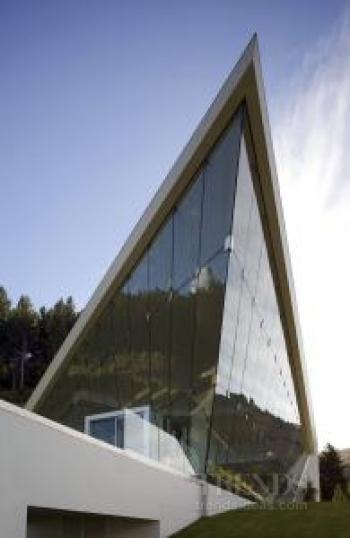 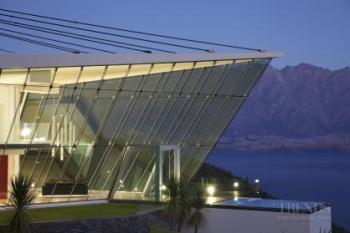 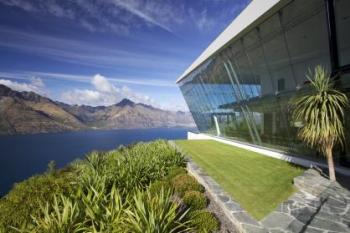 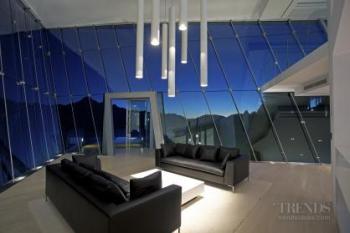 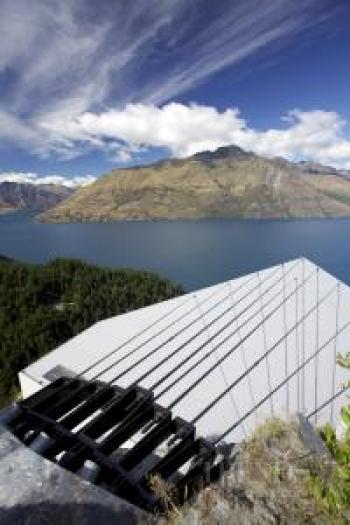 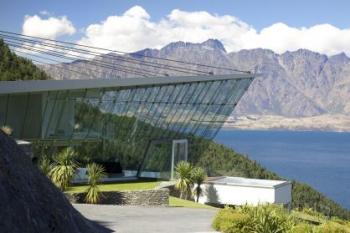 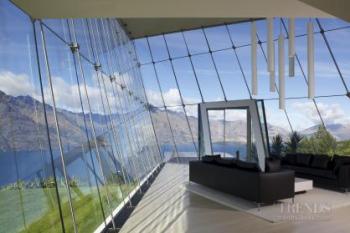 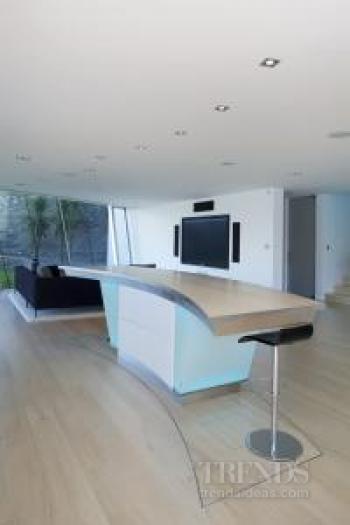 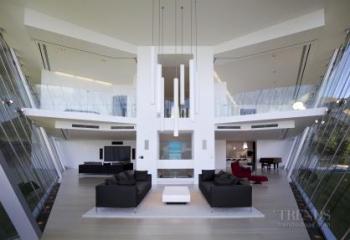 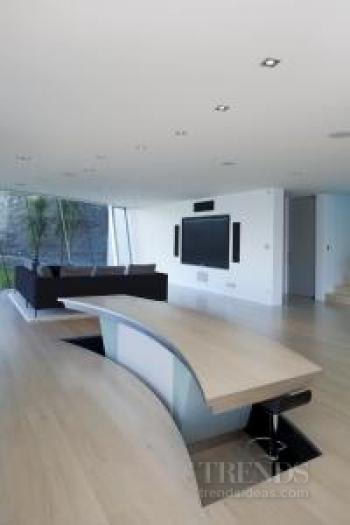 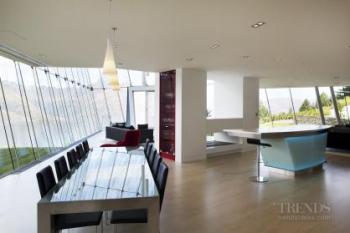 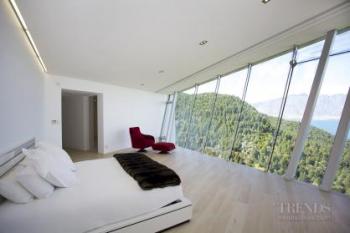 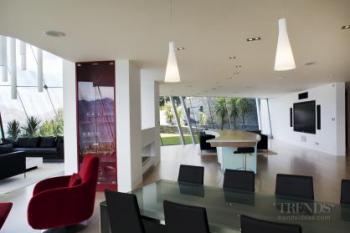 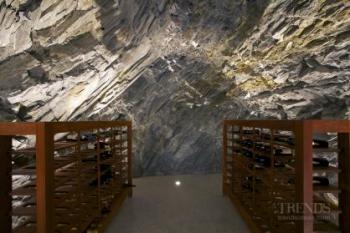 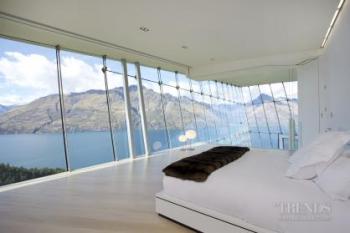 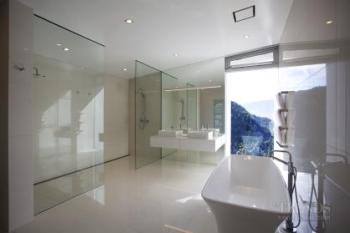 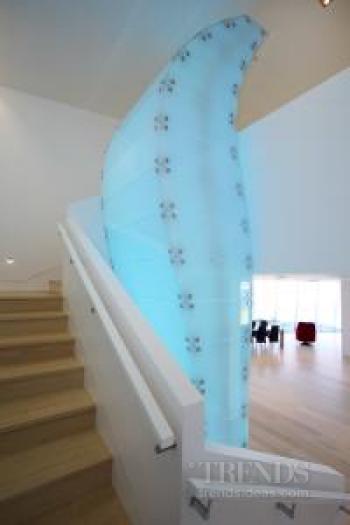 But it is the height of the glazing, and the angled prow of the building that creates the real drama on the inside.

"The glass walls rise so high that they dwarf everyone inside," says McPike. "Standing beneath the soaring ceiling is a little like being dwarfed by the enormity of the mountains themselves."

"Because the ceiling rises to such a height, there is an uninterrupted view of the tops of the peaks, even from the back of the living area."

To ensure all rooms maximise the view, the house is almost entirely open plan. Living areas are on the ground floor and bedrooms are on a mezzanine suspended within the pavilion – this entire floor is supported by the roof and a central double-column structure.

"The living area is also essentially a timber platform floating between the glass walls," says McPike. "The effect is amplified at night by lights on the floor around the perimeter of the space. Premium hardwood in a light shade without any knots was chosen to enhance the pale, clean-lined look."

McPike also chose to let the view speak for itself – there are no artworks to detract from the outlook, apart from a large, illuminated glass sculpture beside the stairwell. To reinforce the pared-back architecture, an island bar unit is raised from beneath the floor when required.

A white-lacquered kitchen, with tall black cabinets either side, is positioned at the rear of the living space. With a large island and bar stools, it is designed for easy entertaining. The house also has a subterranean wine cellar carved out of the rock – a natural, textural antithesis of the sleek glass and steel.

Mezzanine bedrooms are symmetrically positioned either side of the central axis, and all have views. A small reading room between the master suite and second bedroom affords a view right through the two structural columns in the centre of the house. Even in the minimalist bathrooms the emphasis is on the outlook – the tub in the master suite is aligned with the view.

Comfort is also assured, along with energy savings, despite the massive mount of glazing.

McPike says temperature changes are scarcely noticeable inside, as the walls feature 22mm-thick structural glass, comprised of a laminate sandwiched between two 10mm panes. The insulation is greater than a standard residential system, and there is also a low-e coating on the glass that increases the r value.

"Sunshades are provided at the rear of the house only, but because the house faces south, the direct sunlight does not pose too much of a problem. And the air conditioning is seldom used in summer, with passive cooling provided by cross ventilation."

To save even more energy, the house is fully wired as a smart home, with an occupied and unoccupied mode. With the latter, the water heating is shut off and the house goes into stand-by mode, says McPike.

"The house monitors itself, ensuring the temperature inside remains between 10°C and 30°C. This safeguards materials and furnishings from the temperature extremes of the climate."

The landscaping was also designed with the environment in mind. Schist walls and native plants help to ensure that the house, although distinctive, blends with the natural landscape.