Mixing contemporary design elements within a traditional setting is an ideal way to get the best of both worlds.

This master suite is within a new addition modelled on similar lines to the existing house, which comprises two co-joined 1880s brick worker's cottages.

Architect John Behal of Behal Sampson Dietz says the addition is in wood, rather than brick, but it has a similargabled roof to the cottages. This in turn creates an attic-style retreat for the master suite on the top floor.

"Height restrictions were another determining factor in the design," Behal says. "The roof could not go any higher, which meant we had to come up with some creative solutions. In the bathroom, for example, the glass walls of the shower go right up to the sloping ceiling, which gives the shower a sculptural presence. The curved, freestanding tub enhances the effect – the curves of the tub are juxtaposed with the sharp angles of the shower."

The walls of the shower, the bathroom floor and the vanity top all feature marble, which reinforces the tranquil look of the suite. Large and small format tiles create further visual interest. 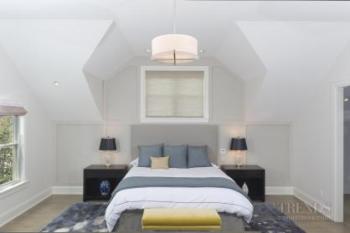 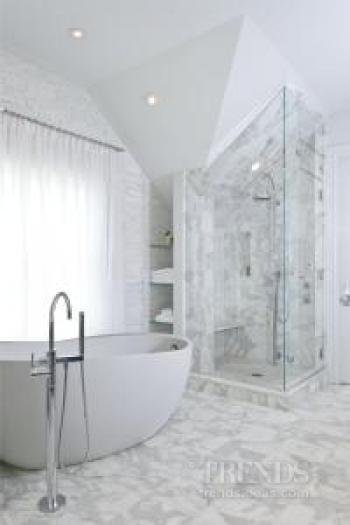 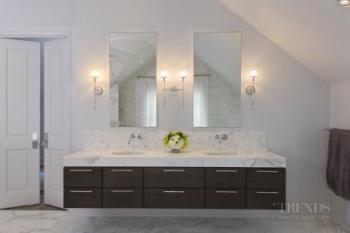 "Limiting the palette to mainly warm grey and white, with dark wood accents, helps to create a serene oasis. We added a light, ethereal fabric for the bathroom window coverings, to soften the look of the tiles."

To maximise space, the oak vanity is cantilevered so it appears to float.

"This also helps to make the vanity – and the two mirrors – seem like separate objects placed within the space, rather than part of the architecture," says Behal.

Corbat says the idea of a retreat is reinforced by the inclusion of a mini kitchen, with two refrigerated drawers, a sink and a coffee machine.

"The owner also has gym equipment in the suite, so she can exercise, bathe and have breakfast before heading downstairs."