A changing focus in apartment interiors has led to the introduction of color and texture through items such as furnishings, fabrics, carpets and wallcoverings. The warming of these once sparsely-furnished and pared-back living spaces has allowed touches of personality to inform individual designs and to establish points of difference.

This apartment interior, designed by Steve Leung, goes one step further. In it, mixing minimalist principles with the extravagance of Neoclassical trappings creates a design theme that resonates with modern appeal, but alludes to historic opulence.

"The client was seeking an interior that exuded affluence and success and presented it in a lush and sumptuous way. We chose a Neoclassical look, but modernized it to prevent the design from looking tacky and overdone," Leung says.

The designer began by containing the use of color to a minimal palette of white, silver and gray. From here, he established a list of materials to include in the design.

Marble floors in the main living rooms feature a heavy gray vein. A lighter strip of marble is used around the perimeters of these rooms to create a border effect, and also presents a visual divide. 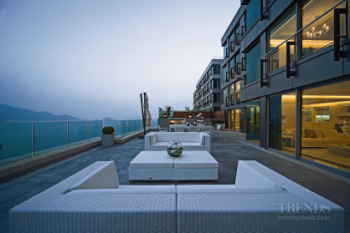 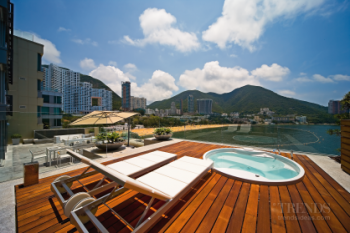 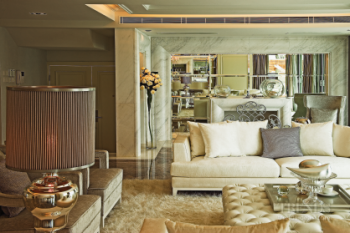 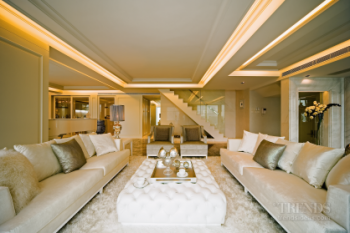 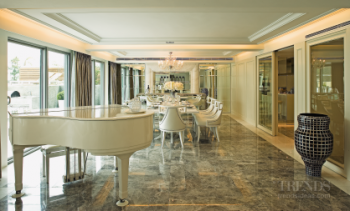 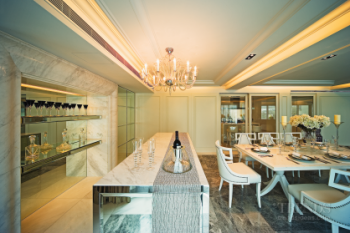 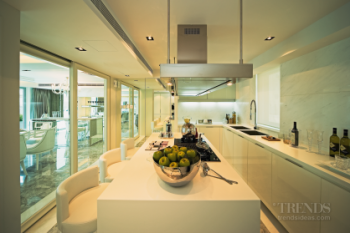 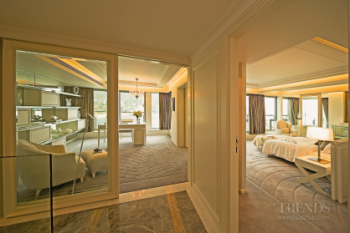 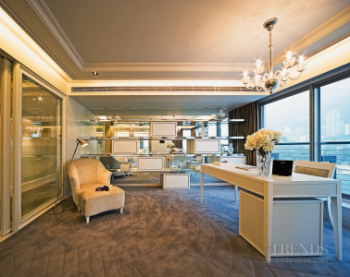 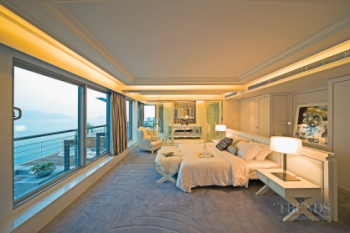 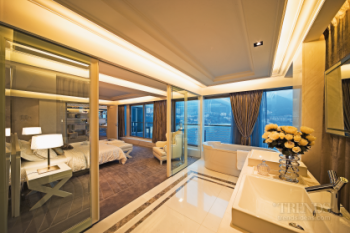 These borders provide emphasis to the elongated rectilinear designs of the bar in the formal dining room, the kitchen countertop and two custom-made sofas in the living room. Combined, these forms reference a modern, minimalist look.

Other elements such as bulkheads, ceiling beams and simple decorative moldings on the walls give a crisp and modern appearance.

"By using a combination of old and new materials such as stainless steel, marble and velvet, and then applying them to the same rectilinear shape, the interior begins to mesh together in a cohesive way," says Leung.

Tray ceilings throughout the two-storied apartment provide another example of this interweaving of styles. Instead of being elaborately designed, they have an unadorned look and a simple white finish. Cove lighting is used to enhance their appearance and provide a modern twist.

Custom-made furnishings add texture and incorporate the established colors. Plush velvet curtains in gray appear in the main living areas and in the master suite. The formal dining table has a custom white marble top, and the white leather on the dining chairs is attached using a traditional pin trim.

The two long white sofas in the living room are covered in velvet and sit on a white shag pile rug. Cushions on the sofas come in three varieties: silver weave, velvet and shag pile.

A buttoned white leather ottoman is positioned in between the sofas and doubles as a coffee table. A marble surround on a nearby faux fireplace is repeated around the shelving behind the bar in the dining room at the opposite end of the space.

"There is an element of subtlety in the details that belies their opulence.

"Continuing the blended theme into other spaces of the apartment, stops the fireplace or the ottoman from seeming out of place or contrived," says Leung.

Internal sliding doors separate many of the rooms. Most are glazed to allow natural light to filter through to every room and emphasize a free-flowing design. Extensive use of mirrors on cabinetry, walls and shelving further reflects light around the interior and gives the impression of a larger space. Both the mirrors and the glazing have bevelled edges to match the tray ceilings and marble surrounds.

"With the view being one of the main attractions of this apartment, it made sense to expose as much of the interior to the outside as possible," the designer says.

The master suite continues the open-plan design of the central living areas on the floor below. It is divided into three sections: the bedroom, master bathroom and a study.

In the bedroom, the bed is backed by an exaggerated headboard, finished in white leather and fixed using the same method as the dining chairs. It is positioned to face the view, as is the bathtub in the adjacent bathroom.

The study and bedroom are carpeted, and the bathroomis tiled in marble. They all feature borders similar to other floors in the apartment, though the carpet is embossed with a wave-like pattern that references the water in the harbor below.

"Adding a marine element to the design is an acknowledgement of the surrounding environment," says Leung.