With its focus on sustainability, collaboration and interaction, this bank fit-out epitomises the workplace of the future

Next generation Discover this article's resources 0

There has been a sea change in the corporate workplace in the past five years. It's a change in the way people work and interact, but it's also an evolution of the workplace itself. Driven by new technologies, the need for increased efficiencies, and a recognition that staff are a company's biggest asset, the modern workplace is much more streamlined, flexible and holistic than in the past – and less hierarchical.

The consolidation of the Standard Chartered Bank's Singapore premises provided an ideal opportunity for the bank to address these issues. The design of the building in Changi Business Park was driven by several key factors, including sustainability – Standard Chartered Bank has long been committed to environmentally responsible design. But the interior design, by Woodhead, was also driven by the need for a more interactive, collaborative and future-proof workplace.

The bank's objectives, as highlighted by Steve Riley, project director for Singapore relocation projects, required an open work space that would be conducive to staff interaction and communication.

"The ratio of space allocated to workstations and communal areas needed to change," he says. "We wanted to give more emphasis to the communal areas and encourage staff to use these – work spaces are not restricted to desks."

Woodhead regional principal Andrew Carmichael says the interior was consequently planned to enhance communication within and across business units. 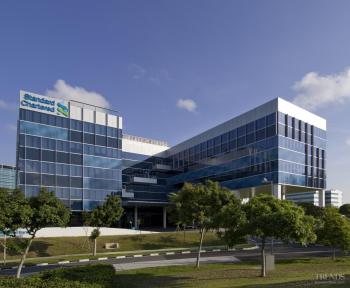 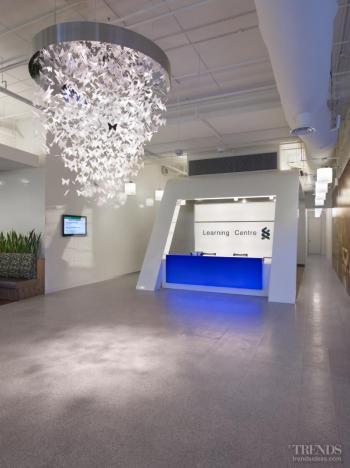 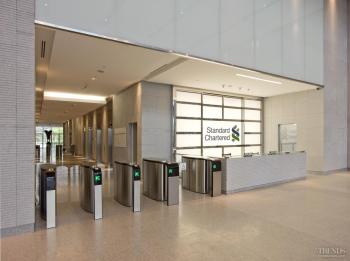 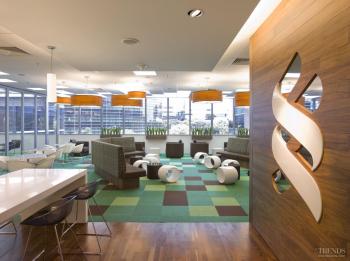 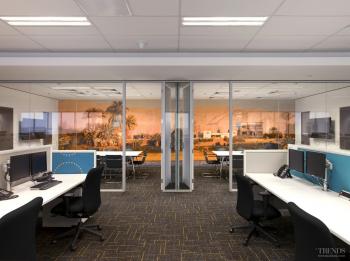 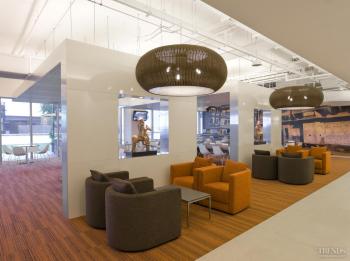 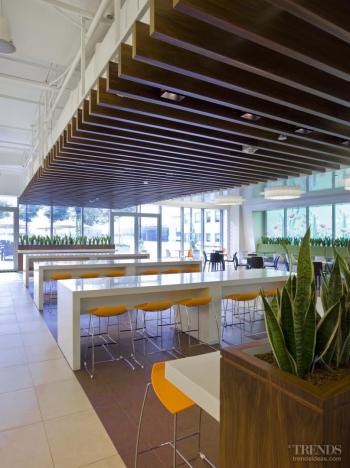 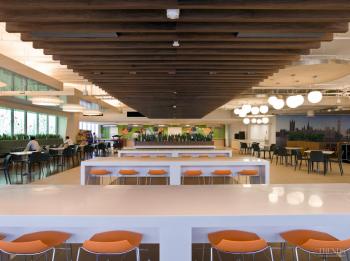 "We created a strong, coherent plan with clearly identifiable collaborative spaces and meeting areas within designated zones," he says. "For example, there are two open meeting areas, called interchange hubs, on each of the office floors. These feature a range of different seating areas, from armchairs and comfortable bench seating to café tables and stools. In addition, there are numerous bookable glass-walled meeting rooms on each floor."

Additional work space is provided in a breakout lounge on the sixth floor at the top of the building.

"This area features very casual, open meeting areas," says Carmichael. "All communal areas are served by wireless connectivity, with specific benches fully wired with IP telephones for longer term occupancy. Other facilities in this space include staff recreational facilities, and an expansive balcony."

The designer says modular planning, coupled with flexible technology, was introduced in order to futureproof the workplace.

"Basing the design on a single module provides plenty of flexibility. It allows for a half module, quarter module or double module to be created for all room types. The modules were also designed to maximise building materials, reducing wastage."

Carmichael says that while individual workstation space is reduced, the company has given back space with the communal areas.

"The office is a lot more efficient in terms of real estate," he says. "The design also reflects a shift in the workplace culture. As well as providing a much more collaborative environment, the design is not hierarchical. There are few executive offices – most of these have been replaced by open desks."

Carmichael says another key driver for the interior design was the need to integrate a number of different national cultures within the workplace.

"The new workplace needed to reflect this cultural diversity. Introducing an international focus was also a way to recognise the geographical spread of the bank's business, notably in Africa, Asia and the Middle East. To achieve this, we created a specific set of colours and cultural references for each floor. As well as giving each floor a strong sense of identity, these references reinforce and complement the diverse and inclusive culture of the bank."

Carmichael says the colour and geographical themes are both reflected in the carpets, furnishings, large murals and in the choice of partition fabrics on the workstations.

"We also used specific carpet colours and patterns to designate neighbourhoods within the general workstation spaces. This helps to reduce the length of the open office area visually and promotes a less uniform feeling."

Riley says the interior has been designed to achieve a LEED Commercial Interiors Gold rating, and is currently undergoing assessment. The base building has already been accredited with a Greenmark Platinum rating from the Building & Construction Authority, Singapore.

The need to provide a sustainable design influenced many decisions – from the lighting sensors to the choice of locally manufactured products, says the designer. It was also one of the reasons the team made the decision to expose the buildings services in key public areas, such as the reception area, cafeteria and breakout lounge.

"The design saves on materials and also creates a very open interior that reflects the nature of the new workplace," he says.