Kitchens are often described as the hub of the home, and this is especially true of kitchens in a vacation home. As well as being a gathering place for friends and family, the kitchen is most often the dining area, and a place to sit and relax with wine and a good book.

This remodeled kitchen, in an older New England house on the waterfront, is all these things – unlike the kitchen it replaces. Designers Dee Elms and Andrew Terrat of Terrat Elms Interior Design say the original kitchen in the house was very disconnected.

"The house has had many owners over the years, each one undertaking a renovation," says Elms. "The house was essentially a series of additions, all from different periods."

The designers say the new kitchen, which was part of a major restoration, needed to be seamlessly integrated with the rest of the house. It also needed to maximize views in two directions.

Consequently, the team introduced five new double-hung windows and shutters on the side of the kitchen facing a picturesque view of the street. Windows on the seaward side of the house were also enlarged to make the most of the view. The original ceiling, which featured a bulky soffit, was replaced with a coffered ceiling. And new millwork, including painted paneling and beadboard was introduced throughout the interior. 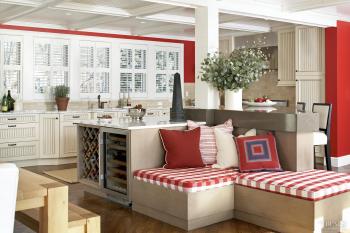 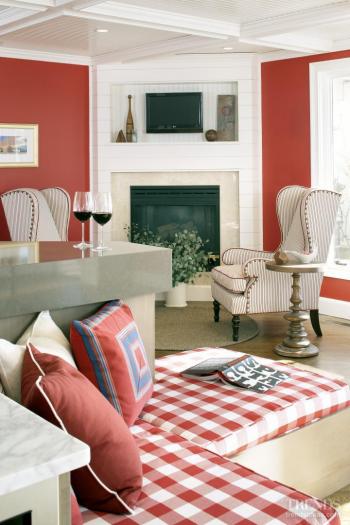 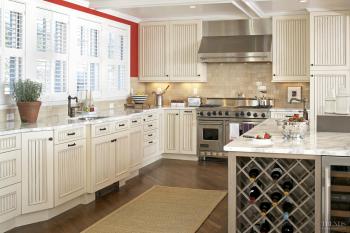 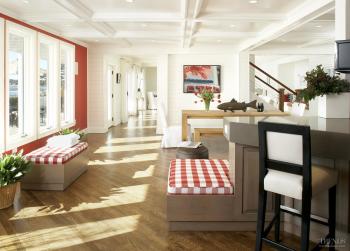 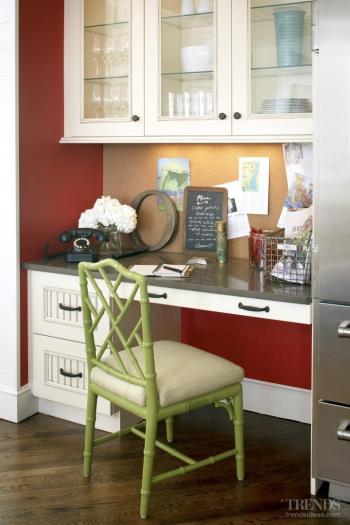 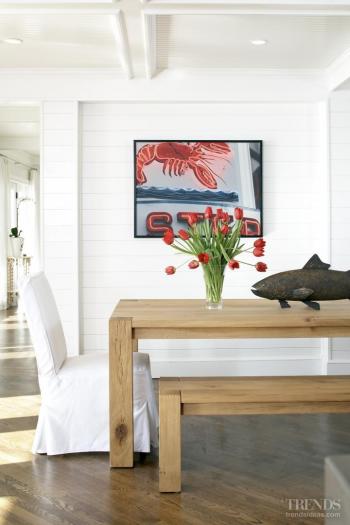 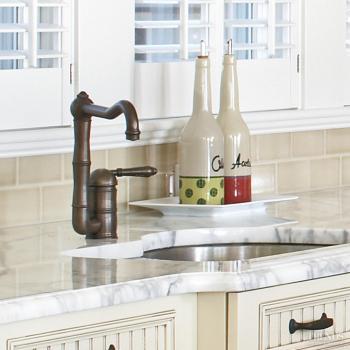 Because the kitchen needed to serve several purposes – as a meal preparation area as well as a casual dining room, family room and home office – the designers created a layout that reinforces the sense of the kitchen as a hub. Key features, including bench seating, wine storage, bar stools and wing chairs, are positioned around a three-sided island.

"With its 8-inch countertop and solid base, the island anchors the room and provides a center for entertaining," says Terrat. "It wraps around an existing structural post, which is like the spoke of the wheel. This is the place where all the different components of the room come together."

To enhance the traditional character of the house, the cabinetry features beadboard doors painted in a warm off-white shade, chosen to avoid a stark white look.

"The white is contrasted by Calacatta marble countertops on the perimeter cabinets, an antique-style subway tile backsplash and a wood veneer with a pale driftwood-colored stain," says Elms. "Because the owner loves red, we introduced bright red walls and cheerful furnishings."

Appliances also contribute to the wow factor – a 48-inch range and 48-inch refrigerator with a glass door were chosen for their aesthetics as much as their functionality.

"We wanted to play up the informality of the space," says Terrat. "This is almost like a picnic table inside – it's a strong contrast to the classic New England architecture."