Clear-felling land to create a vacant lot may have been a common practice a hundred years ago, but it's not always a favoured course of action today. Designing a house to fit with the natural landscape is a much preferred option, as this project illustrates.

The house replaces a smaller cottage that stood on the site for nearly a century. Architect John Mills says the original house was one of the first to be built in the seaside town.

"Even back then, this would have been a natural building site," he says. "Elevated between two small streams, surrounded by native bush and with a great sea view, it provides an ideal building platform."

Mills says the owners of the former cottage wanted a bigger home for their growing family. However, the larger size of the new house meant it encroached on the surrounding native trees.

"The solution was to nudge the house against the trees," says Mills. "We wanted the house to look as though it has grown up amongst the bush, and is part of the natural order of things. Throughout the house, the glazing has been positioned to allow glimpses of the tree canopy – with a different perspective from every room." 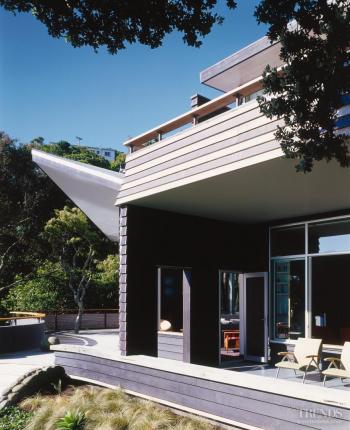 Mills says black, creosote-stained weatherboards were specified to blend with the bush setting, and reference the cladding on the original cottage.

"We have used larger, non-standard planks to give the house a more robust, very physical presence that balances the lighter aspect of the trees."

A large, semi-enclosed evening porch is another visual link to the old cottage. Mills says the owners particularly liked the original three-sided veranda for evening drinks and meals.

"We have re-invented this in the same space, and given the new veranda a classic sense of proportion. It's an old-fashioned space, but it's a great place to sit and watch the sun set over the sea."

Other elements that helped determine the design of the house included a respect for feng shui principles, and the owners' love of art.

"We wanted to weave the art and craft of the building into the actual structure," says Mills. "The wooden weave of the front door is the first place where that can be recognised.

"We didn't want everything to look too homogenous – it was important to incorporate special features, such as the copper and macrocarpa strips on the top-floor deck."

Another noticeable feature of the exterior is a sculptural wall on the outside of the kitchen and family room. Square panels of copper alternate with bronze and powdercoated steel panels in bright colours.

"The exterior of the wall expresses the action, movement, colour and personality of the living space within," says Mills.

To balance the angular lines of the house, Mills introduced curves – both inside and out. The curved boardwalks that appear to float above the ground are similar to those seen in native bush walks.

"Curves soften a design visually. They provide flow and offer different perspectives from different points as you move around the home," he says.

Several curved walls on the interior form part of a larger curve on the floorplan, which works as a unifying element. These include semi-freestanding, bright-red structural walls in the family room.

"These form part of the central curve, and signify the heart of the home," says Mills. "They are reference points within the open layout, and can be glimpsed from many rooms and the stairs."

Contours are also a feature of the kitchen, which has a rounded peninsula and curved rear wall joinery made from maple oak and maple plywood. Gaps above and below this wall enhance the sense of an art installation. The wall, which accommodates two ovens, conceals two walk-in pantries.

Colour also makes an impact within the house. A brown-toned feature wall complements a favourite painting in the formal living room, while a bright blue, angled wall makes a statement in the family living area.

"The angled wall meets the ceiling on the perpendicular, which emphasises the angle of the roof and reflects the way the rata tree outside grows upwards and outwards," says Mills.

A custom-designed, organic stairway, made from structural steel and swamp totara, leads to the second floor bedrooms.