This remodel has been completed within the kitchen's original footprint, adding charm and greatly improving functionality

Achieving optimum function and flow from your kitchen remodel doesn't always involve borrowing from surrounding spaces or knocking down walls. A couple of inspired design strokes can transform efficiency, improve pedestrian flow and bring a fresh ambiance at the same time.

This kitchen remodeling project by architect Lee Ann Gamble, with input from homeowner Sandra Player, has transformed its use. There were a couple of things Player liked about the original kitchen – the way the cooktop faced the living areas, allowing her to cook and socialize at the same time, and the old butcher's block at the center of the room.

"These things aside, I asked Lee Ann to completely replace the kitchen with a new workspace where everything is at hand and no surface or storage area is wasted."

Several different strategies were used to achieve this. To begin with, Gamble says she replaced the outer island with a peninsula counter, complete with cooktop – so it is still possible to cook and chat with guests in the living room.

"This island had been dysfunctional, creating an awkward circulation area between the wall and the island. Now, the new peninsula offers additional storage and helps define the kitchen, which still sits within roughly the same footprint." 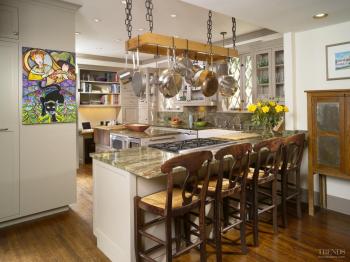 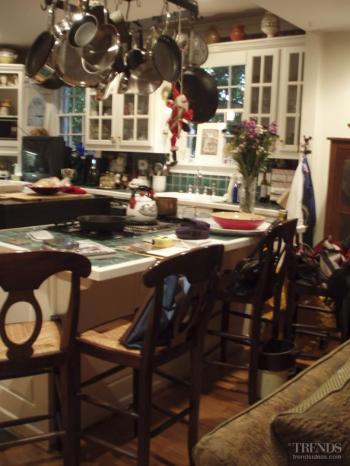 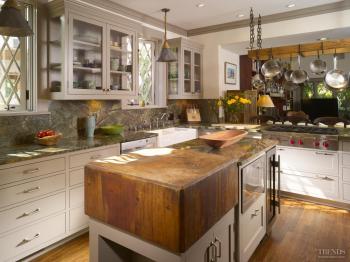 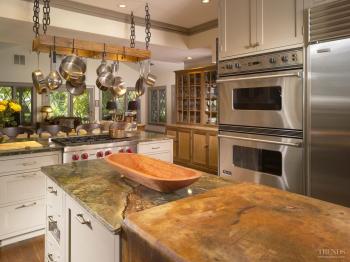 Next, Gamble removed the central grouping of tables that had included the butcher's block and replaced them with a single, functional island that incorporates the original chopping block.

"The new island is a powerhouse for the kitchen and includes a wine cooler, microwave, and storage bins. It even includes a space for dog bowls, so they don't get under foot.

"The appeal of the butcher's block for Sandra was that it looked like it had been used extensively over time," says Gamble. "And it was for similar reasons she chose the rainforest green marble seen on the island, peninsula, perimeter countertops and backsplash. Not quite as rugged as granite, this stone will wear slightly over time, adding to the sense of history."

In terms of cabinetry, most of the open shelves were replaced with wide drawer systems that combine efficiency of storage with an emphasis on horizontal lines. In addition, the choice of elongated drawers makes the space feel less cluttered, and so larger. The upper cabinets are now taller, further expanding the storage options.

Finally, new diamond-paned kitchen windows were installed to better match those in other areas of the home.