From its massive, locally found fireplace stone to its bark-finished window and door surrounds, this home reflects and celebrates its woodland environment

Creating a rustic vacation home could be undertaken as a solid, simple piece of architecture, rather than as a comfortable modern home with a rough and ready facade. But while authentic log cabins aren’t traditionally known for comfort, it is possible to create an interior that holds true to the honest nature of the structure, while still giving it a welcoming ambience. This solidly built mountain retreat achieves an interior that is true to its log cabin construction, but also offers touches of technology, texture and tone that make it a relaxing place to linger. In the first instance, interior designer Jackie Naylor designed the vacation home to be an extension of the woodland environment that it inhabits. It also had to offer an environment that was a far cry from her modern urban lifestyle, ensuring she had a complete break from her working life. “The home is the antithesis of our highly contemporary city dwelling, with its plethora of straight lines and clean surfaces. This interior is simple, honest and appropriate to the log structure that surrounds it,” she says. “The log walls and structural beams are on plain display, so it was imperative that the interior responded to this.” Naylor’s aim was to complement the exterior. To achieve this she gave the interior walls a natural, ready-made feel. Vertical saw-cut plywood planks were used and then stained brown. But the dark wall tones used on a large scale made the interior seem too dark, so she sanded back the stain, exposing lighter wood and the odd knot and blemish underneath. This not only lightened the effect, but also further contributed to the rough-hewn look. “Underfoot, reclaimed wood flooring from old barns was used,” says Naylor. “All the worn elements on the interior are the real thing – the closest we came to veneer was using bark stripped from local trees to create the eye-catching finishes on the window and door surrounds.” Another unusual, yet undeniably primitive, element is the bannister on stairs leading up to the loft. “We discovered a local artisan who creates furniture and bannisters made primarily from locally found twigs and branches,” says Naylor. “We commissioned him to create this bannister, which has become a feature of the living areas.” While these elements all chime with the home’s construction, Naylor also found other ways to translate the rustic feel into a relaxed interior. “We wanted the interior to have an implied history, and the eclectic nature of the furnishings builds on this idea,” she says. “For example, in the living room we have an old woodworker’s bench used as a wine rack. This sets up a sense of intrigue as well as having a functional purpose.” Elsewhere in the living room, large worn leather chairs are comfortable and appropriate to the well-used look of the interior. Naylor wanted all the furniture to have a gathered-together look, that might have taken years to create. With the interior largely in wood, splashes of color are provided by the chairs and occasional exotic throws. Oriental carpets, a runner and animal skins are used on the wood floors for added color and to visually break up the large areas of wood. “The drapery in this room fulfills a similar function to the furniture and carpets. In practical terms, they are seldom drawn but the two-tone ultra suede and chenille material adds a delicate touch to the decor and the curtains also have a sense of having had a previous, more refined life elsewhere.” Traditional-look table and floor lamps bring additional warmth to the rooms. These were chosen for their eclectic, almost whimsical, nature. “On such an authentic construction, even the overhead lighting was difficult to achieve, with no convenient ceiling to hide cabling behind. Black track lighting provided a way around this.” The kitchen is an area where technology tends to stand out and Naylor overcame this with integrated appliances and by juxtaposing the weathered and silvery with the shining and new. “I found a local cabinetmaker who creates pieces from recycled barn wood, and the overall look for the kitchen was born,” says Naylor. “The concrete countertops tie in with the large stone fireplace and stone-floored entrance to the home.” In general, the interior aptly reflects the home’s exterior, but in a way that lets comfort become a clear winner over privation. 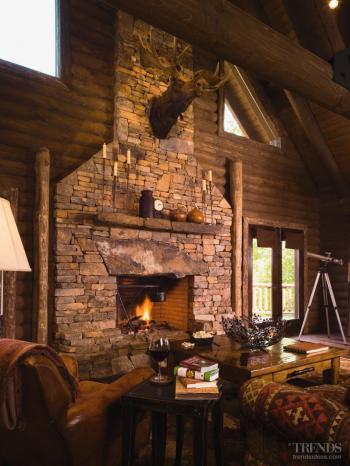 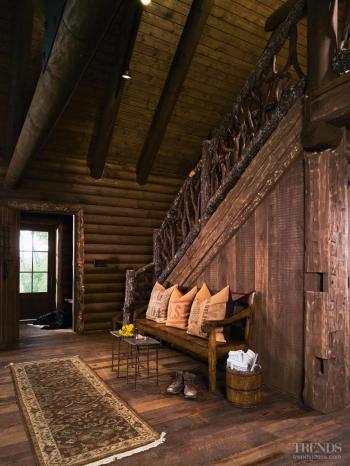 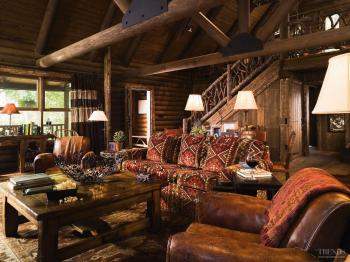 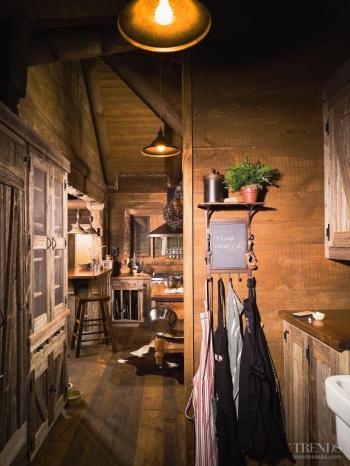 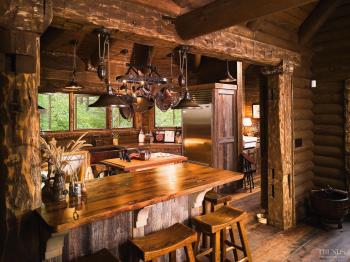 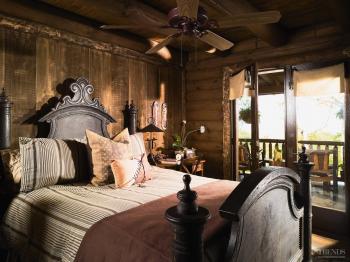 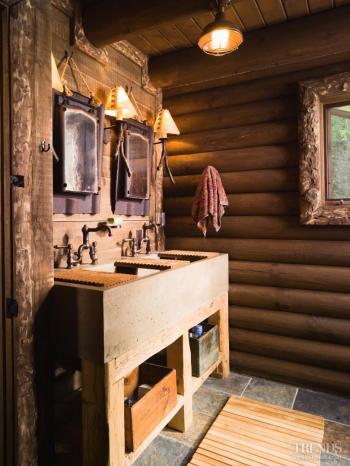 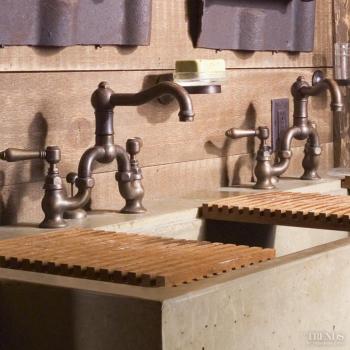