A colour palette taken from a native tree, and a richly textured natural granite formed the basis of the design of this new kitchen

Modern kitchens often take on a style relevant to the materials available or the colours in vogue at the time. However, this kitchen takes its cue from the beauty of the surrounding environment.

Perched on a steep, sloping site, the house is surrounded by the lush green of a rainforest, and looks out over native tree tops to a patch of glistening harbour beyond. Naturally, the owners wanted a kitchen that would not only enhance the verdant surrounds but also fulfil their long list of specific functional requirements.

Kitchen architect Toni Roberts was able to resolve all of these. Joining the project at the planning and permit stage, Roberts studied the architect's plans for the house and began establishing what the owners wanted from their kitchen.

"I always like to consider the context when beginning a design. It makes sense to me to develop the kitchen form around the existing architecture, working closely with the owner to create a purposeful design that looks as though it was always meant to be that way."

While a galley kitchen was indicated on the plan, Roberts felt that the presence of the two long, high windows meant the space leant itself to an L-shaped layout – providing easily accessible storage while balancing the form. These clerestory-style windows let in daylight and glimpses of the native vegetation. 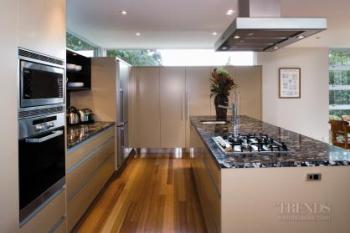 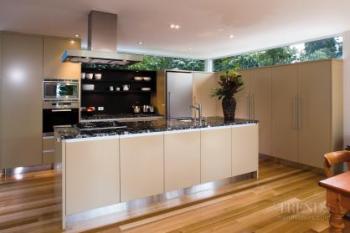 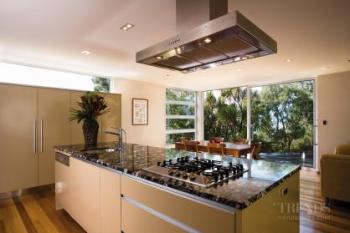 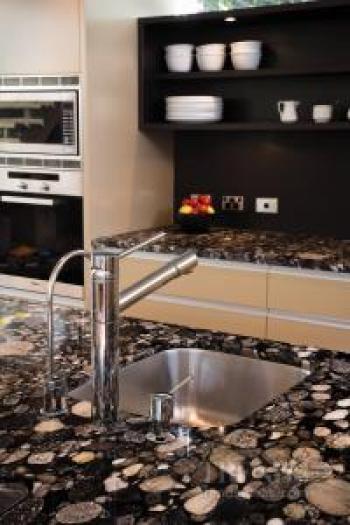 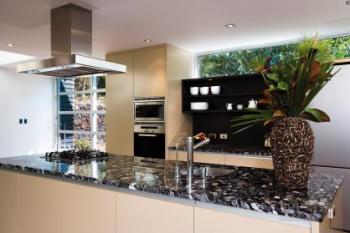 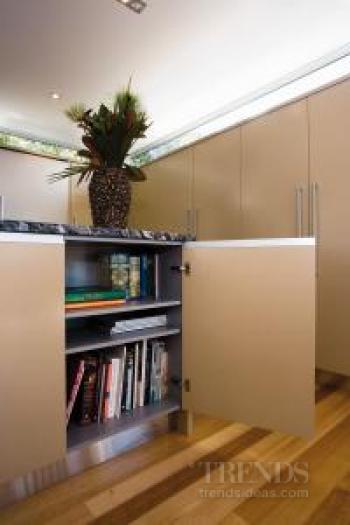 Perhaps the most eye-catching kitchen feature is the benchtop material – a natural granite reminiscent of a stream bed filled with smooth pebbles. It is a further reference to the site, since there are many such waterways nearby.

"The granite has rich, textural qualities," says Roberts. "I wanted to balance these by using smooth, block colours for the cabinetry, that wouldn't compete with the impact the granite has on the room."

The inspiration for the two colours used for the cabinetry lacquer was drawn from the leaves of a native tree. The various hues provided a palette of nine shades, which have been used throughout the house.

Taking into consideration the colours of the granite, the wood flooring and the stainless steel appliances, a warm gold was selected for the cabinetry. This is contrasted by the dark charcoal used on the long, open shelf unit. Roberts designed the proportions of these shelves to precisely match those of the windows above. This darker area provides a point of interest to what would otherwise have been a bland rear wall.

Aesthetics aside, Roberts says the functional requirements of the kitchen are also well articulated, and have been carefully thought through. By keeping the end pantries shallow, plenty of floor space is left clear for the island in the middle of the room. The shallow pantries also make all the food items and crockery stored within easily visible and accessible.

Initially, Roberts envisaged that the oven and hob would be at the far end of the room. However, after close consultation with the builder, the design was rearranged to maximise the ducting void available for the rangehood and thus retain its efficiency.

The design has the added benefit of the dishwasher and crockery storage being close to each other – dishes can be put away in the adjacent cupboards, without getting in the way of the cook.

Throughout the kitchen, storage has been designed with specific items and functionsin mind. At the end of the tall units near the large glazed entry door, there are three custom-made internal drawers – one to store each family member's shoes. Above these, there is a bench-height shelf for sorting mail.

Within the wall of shallow pantries, one was specifically designed to fit the hoses and accessories of the central vacuuming system. It also has a high shelf for storing detergents out of the reach of children.

Sharing this sort of detail-oriented thinking made this client-designer relationship particularly successful.

"There is a real sense of individuality and drama in a kitchen that has been designed around its environment and natural materials, yet still manages to satisfy all the utilitarian demands," says Roberts.