Sites of cultural, historical and geological significance provide a special challenge for both architects and their clients. While a project may have a raft of functional requirements, it is essential not to disrupt the intrinsic sense of place.

The Adelaide Desalination Plant and Kauwi Interpretive Centre, owned by South Australian Water Corporation and managed by Adelaide Aqua Alliance, occupies such a site at Port Stanvac. The area is noted for its 70m-high striated cliffs and spectacular ocean views, and for its cultural and historical significance to the local Kaurna Aboriginal community. These factors strongly influenced the design brief given to Woodhead, says South Australian Water Corporation project and operations director Milind Kumar.

"The corporation made a commitment to consult with the local community, including Aboriginal elders, on the development. This feedback helped to determine the framework and guiding principles of the project.

"It was clear that the interpretive centre needed to embrace the natural landscape and complement the function of the plant. And the building needed to have a low profile, so views would not be obstructed. The centre also had to provide appropriate educational facilities, and archival storage for local artefacts."

Woodhead architects Ben Mountford and Jim Williams say there was an additional consideration. 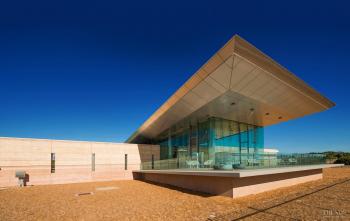 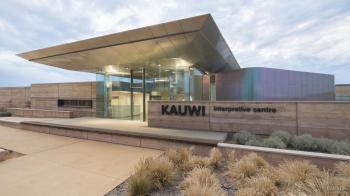 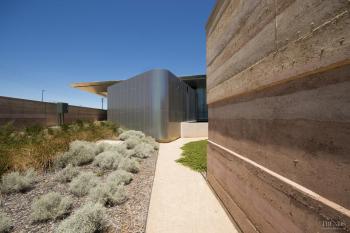 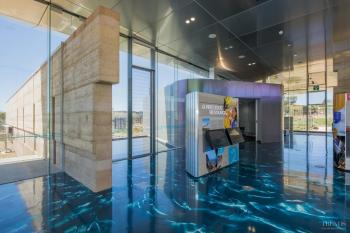 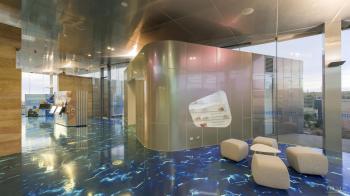 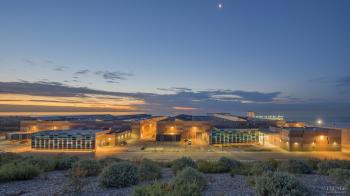 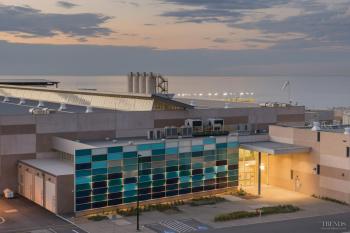 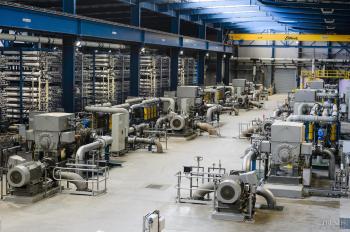 "The client wanted a high-quality design and encouraged the team to provide a significant work of public architecture, rather than yet another industrial development."

The architects consequently took an integrated approach to the design, developing a consistent architectural language across the site, with strong links with the surrounding landscape. The walls of the plant, for example, feature precast concrete panels in varying textures, colours and patterns.

"The textured facades help to break down the massive scale of the walls," says Mountford. "The patterning relates to the slope of the hills – the panels graduate so they are darker at one end."

Two facades facing the interpretive centre are clad in glass panels in varying shades of blue and green.

"These facades also break up the scale of the long camouflaged walls," says Williams. "They define the entries for workers and serve as a metaphor for water and the overall function of the plant."

The design of the Kauwi Interpretive Centre also takes its cue from the landscape. Rammed earth walls mimic the layered strata of the cliffs and help convey a sense that the building has emerged from the ground. Williams says the handcrafted construction of the walls creates uneven, slightly wobbly bands enhancing the visual connection.

The walls extend out in two directions, forging yet another link with the landscape. They also appear to move right through the glass walls, blurring the line between inside and out. And in places the walls overlap and define smaller spaces within larger spaces, encouraging exploration.

"These strong natural references are offset and punctuated with reflective metals that reference the high-tech processes of the desalination plant," says Mountford. "The huge roof, which appears to defy gravity to float above the building, is clad in aluminium that reflects a rippling water feature at the entry, the interior and the landscape beyond. The roof soars up above the viewing deck to lead the eye out towards the plant and the ocean."

Iridescent aluminium wraps a pod enclosing a small auditorium that extends out through the glass walls. The organic form of the pod is echoed by the interior design, which is also by Woodhead.

"The epoxy floor is an obvious water reference," says Mountford. "It was created by layering two coats of epoxy – white followed by blue. Scooping out sections of the first coat ensured the final effect is three-dimensional, with a real sense of depth."

Williams says the built form is designed to allow people to find their own way through the centre and the displays.

"It aims to provide a journey of exploration that allows people to discover and learn at their own pace, and experience the building and landscape in their own way. The architecture reinforces this approach by providing multiple pathways through and around the interactive displays and earth walls. At the same time, the user has an unfolding spatial experience – views are gradually revealed as one moves through the space, ending with the dramatic views out to the plant and the coast."

Mountford says the pathways provide a direct link to the Tjilbruke Dreaming Trail, a cultural trail of the Kaurna people that runs past the site. Displays within the centre reference the trail and the importance of water to the community. Artefacts found on site are also displayed near the entry.

"We worked closely with the Kaurna people on many aspects of the design. The community has even helped develop a bush-tucker garden that showcases indigenous plants."

Milind Kumar says that in the short time it has been open the centre has proved highly successful, with a huge number of bookings for school groups.

"The feedback has been fantastic," he says. "The centre has helped dispel any negative ideas people may have had about the impact of the plant on the site and community."