Planning a house on an open site, blessed with majestic sea views poses its own design challenges. Do you choose to make a bold architectural statement or take a subtle approach with a design that complements the environment?

In this instance, the architect, acknowledging that the star of the show was the tranquil setting, chose not to compete with nature. Rather, says Stephen Kanner, the design solution for this coastal home was based around simple forms and framing nature like art on a gallery wall.

"This home's design is distilled down to a simple composition of geometries and materials, so there is no visual clutter," says Kanner.

"A U-shaped floorplan cradles a central courtyard, with the perimeter opening up to views of the Pacific Ocean to the west, and the Santa Monica Mountains to the east."

The house that originally stood on the site was destroyed by a large bush fire. Kanner Architects was called in to design the replacement. When that house passed to new owners, Kanner received the opportunity to reconfigure his original design. 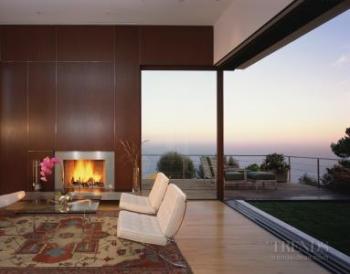 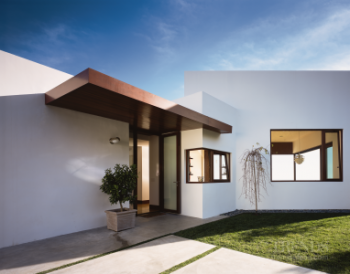 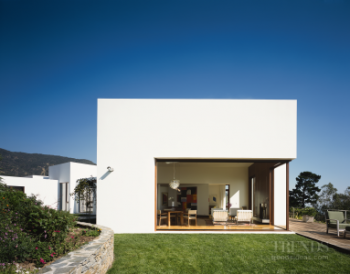 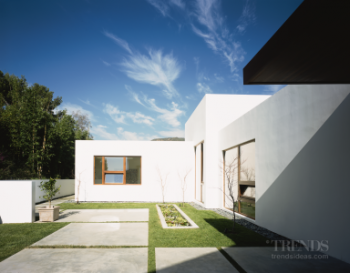 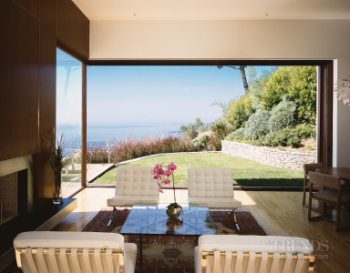 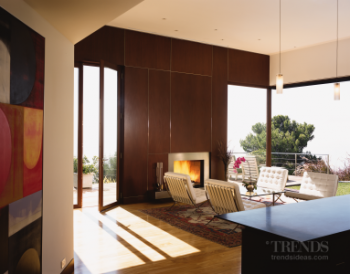 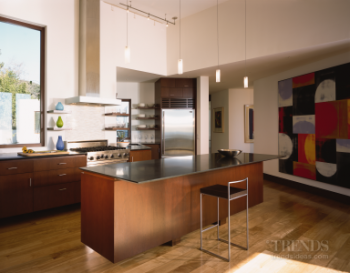 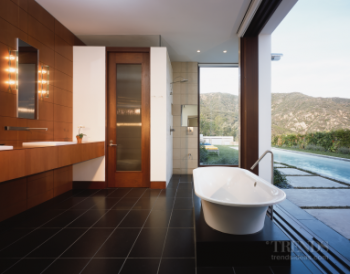 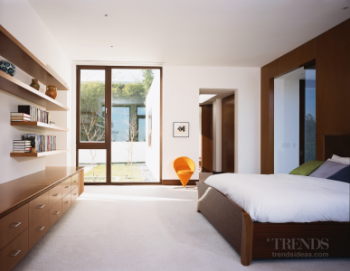 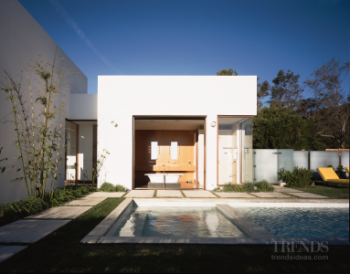 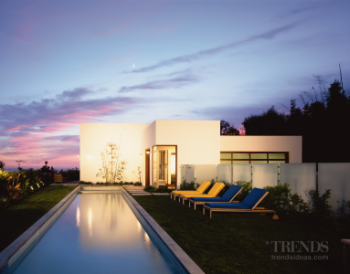 The house has no eaves, says Kanner, to reduce risk in event of another fire.

This partially led to the cubist, geometric shape of the structure. Other fire precautions included the avoidance of planting large trees close to the property.

The design of the house is minimalist and linear. White, plaster cubes, with ceilings of varied heights, form the structure of the house. The primary rooms have 14-foot ceilings. These rooms are connected by lower plaster forms, enclosing halls, secondary bathrooms, and a home office.

"The house is a blend of international influences," says Kanner. "The white plaster surfaces recall images of a Greek hill town. The client was also interested in Japanese design, so we traveled to Tokyo to research projects there,"

The key materials used in the home's construction were plaster and mahogany.

"The interior's bare, white walls and light, alder wood floors work in tandem with the mahogany windows and doors to create a simple, peaceful sanctuary. Under-fastened teak decks extend the eye out towards sea at exactly the same level as the living room floor."

"Mahogany is repeated on cabinetry and wall paneling throughout the house, adding warmth and personality to the interiors."

In the original house, a partition wall separated the kitchen from the rest of the living areas. This wall was removed in the new house so the kitchen, dining and living areas are open to views from any vantage point.

"Entire walls composed of pocketing doors open both the living room and master bathroom to the outside, promoting the gallery-like feeling," says Kanner.

The master bathtub also sits beside a series of these doors, overlooking the pool. With the doors open it feels like the bathtub is outside.

Although they appear simple, the interior finishes required early planning, says Kanner. For example, the thin bookshelves that cantilever off walls have supports built into the wall studs. And the geometric patterning of the wood paneled walls, with thin stainless steel splines, recalls the wood used in windows and cabinets.

Outside the house, the linear lap pool is separated from the adjacent motor court by a frosted backlit glass wall. The glass panels of the fence and square pavers again recall the geometric lines of the house.