When an architecturally designed home in a prime coastal location is cantilevered off a cliff, the design will naturally make the most of the dramatic sea views. However, there's another way to appreciate nature in such a setting.

This master suite forms part of a modern home with 270° outlooks of beach and city. The house has two levels on the cliff top, and four that hug the rock face below. Designers Darren Genner and Simona Castagna were asked to create a master suite that would take in the beauty of the stone face behind, as well as the beach views on the other side.

"The suite had to defy convention, offer total privacy and be in keeping with the home's high-end architecture," says Genner. "There had to be a freestanding bath, a large shower, his-and-hers vanities and a spacious closet."

The designers devised an open floor plan, rather than separate rooms, avoiding the need for internal dividing walls that would obstruct the views. Sliding doors were introduced on the bathroom side of the suite, which can be left open during warmer months, providing valuable cross ventilation and a more intimate connection to the rugged rock formations.

"The toilet and bidet cubicle and the shower are positioned to one side of the space, behind two structural support piers," says Castagna. "This layout allows clear views of the rock face. 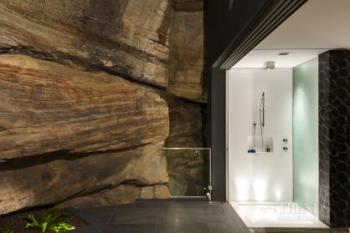 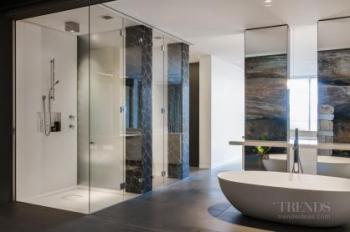 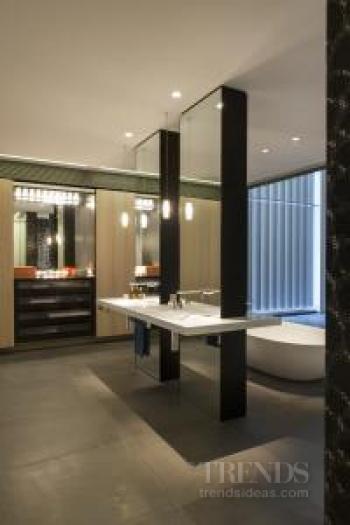 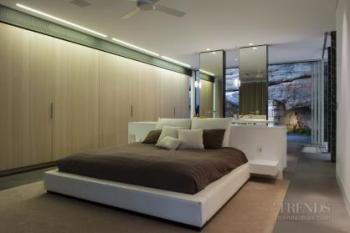 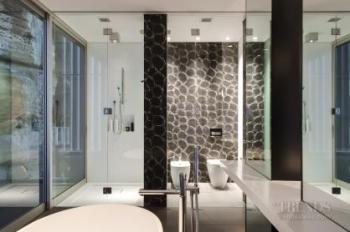 "We set the closet on the wall opposite. This offers 24ft of storage, tucked behind 4ft-wide pop-and-slide doors. Included in this run of cabinetry is a vanity, complete with Hollywood-style make-up lights and dedicated space for hair equipment and jewelry."

The designers introduced two central blade walls that are pivotal to the design. A custom Corian washbasin wraps around both, and appears to bisect them. Each blade wall is mirrored on both sides to reflect the views from any point in the room.

The blades also partition the bathing space from the sleeping and dressing areas in front, without obstructing sightlines. Set next to them, the smooth oval bath contrasts the craggy rocks on the cliff face.

Finishes are consistent with those in the rest of the home. The floor is in large-format basalt tiles, walls are clad in a Bisazza crocodile print, and the balance is smooth, cool Corian. Veneers tone with the nearby sandy beaches.