Photography by Andrew Pritchard; image below by Mark Cooper

In architecture and interior design, nothing exists in isolation. Material relationships are formed in sympathy, or in contrast – whichever brings out the best in both.

This clean-lined kitchen, by the designer of the house Dane Richardson and interior designer Lynne Sheen, was created partly in response to the house and its surroundings. The highly contemporary home features walls of concrete and is nestled into the hillside.

In some areas, the exposed grey walls form part of the interior aesthetic and the expansive open-plan living, dining and kitchen volume includes a swathe of textural, off-form concrete.

Richardson and Sheen played off the cool, rugged look of the textured, unpolished material, creating a warm kitchen in a limited palette of wood, glass, chrome and engineered stone.

The choice of natural wood was important, not only in terms of warming up the look but also for creating visual connections right across the room, says Richardson. 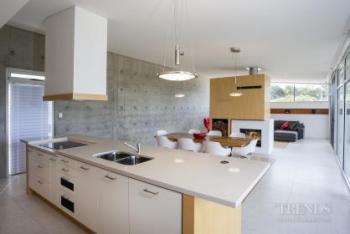 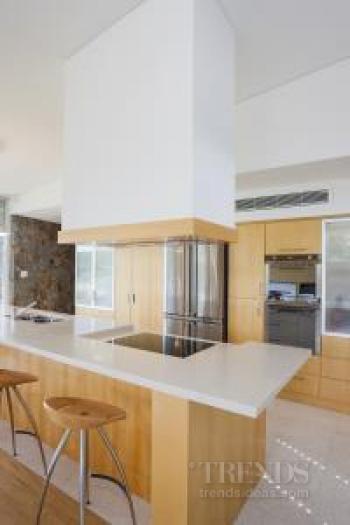 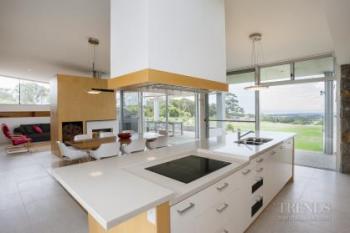 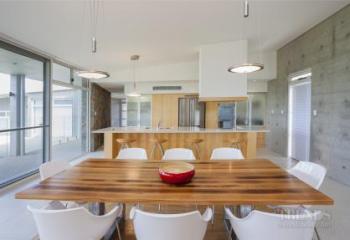 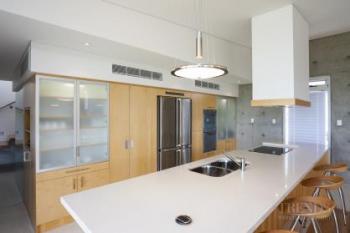 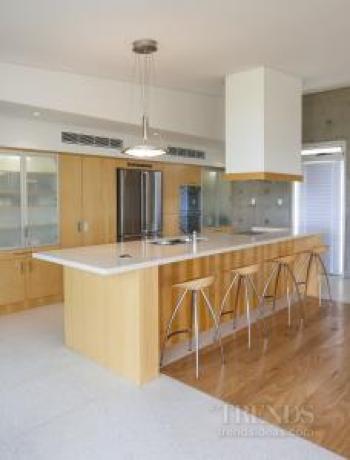 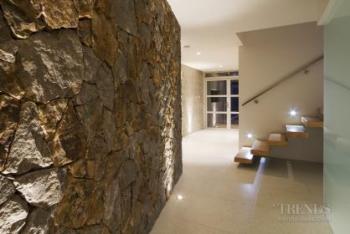 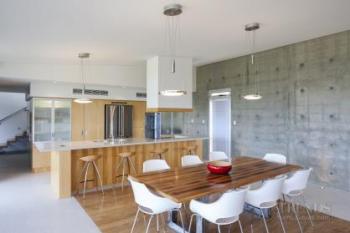 "Blackbutt wood veneer was used for the perimeter cabinetry and on the outer face of the island. It is also seen on the fireplace element that sits between the living and dining areas."

A niche bookcase along the far end of the room is also in the same species.

"We used veneer rather than solid wood for the cabinetry, as it is fixed to a rigid carcass. Solid wood in this context could warp after extended use," says Richardson.

Large central sections of the floors in the dining and living areas are laid in solid marri wood. This species is noted for its gum pockets and rich character.

"While the look of wood predominates, there are counterpoints. Translucent glass fronts both the end cabinets and also wraps around the corner to the left, forming the entrance to the wine cellar. This shiny surface connects with the white stone benchtops and both materials are in keeping with the pale wood and white floor tiles. Low-maintenance white lacquered Melamine was used on the working side of the island," says the building designer.

Directly opposite the cellar entrance, in the circulation corridor, is a massive feature wall made of raw granite, unearthed on the property. Like the coarse concrete, this provides a strong contrast to the smooth surfaces.

The kitchen has been designed to make links across the room in terms of shapes as well as continuity of materials, says Lynne Sheen.

"In particular, this is seen in the connection between the dropped box rangehood and the fire surround, which are similar in proportion, if not scale. The choice of the rectangular box for the rangehood allowed us to conceal a heavy-duty extractor with minimal visual impact. We added the wood trim for further continuity."

The kitchen is generally only used by two people and so did not need to be set up to feed a multitude. Tall doors to the left of the stainless steel refrigerator open to a walk-in pantry. The glass-fronted cabinets contain crockery, and those on the far right hold small appliances.

Richardson says having the kitchen designer on board right from the construction stage meant she was quickly in tune with the overall palette and aesthetic. This helped her tie the kitchen aesthetic more closely into the fabric of the home, rather than it having it look like an isolated unit within the greater living space.