Nestled amid the surrounding trees and undulations of the land, this spacious house succeeds in creating a private yet open-plan family environment

A house situated near a central communityattraction will also be close to traffic and pedestrians. In this respect, obtaining privacy without being detached from the environment is difficult, especially if you want to encourage open-plan living and a sense of connection to nature.

These were challenges Charles Stinson faced when he set about creating this new house on a mature site in a popular lakeside parkway. The original house was old and did not suit the needs of its owners, so it was demolished to make way for a new two-level family home.

The architect's vision combines vertical and horizontal rectilinear forms to create simple geometric patterns that are interconnected and have an artistic and sculptural appeal.

"Horizontal lines elongate the house and serve to keep its size understated so as to not dominate the space or overpower the surrounding greenery. Rather, the house settles into the landscape and the trees and grass envelop it," the architect says.

As a counterpoint, a semi-circular bluestone wall creates a physical barrier separating passing traffic from the house. The front lawn is raised and effectively cancels out the road while enhancing the sense of being lakeside. 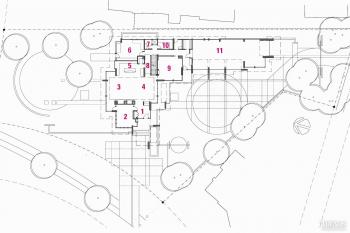 On the other side of the house a paved circular courtyard of similar proportions to the lawn fills an area adjacent to garaging and a children's playground. Both can be accessed from the house through expansive full-height sliding doors that open off the main living area.

"We slowly composed the structure by bringing in one form at a time. It is an artistic and sculptural exercise in defining space in relation to how the family functions within it. It is also about creating connections to each other and to the home's natural surroundings," the architect says.

These interconnected relationships are maintained by establishing lines of vision to the lake and warrant the extensive use of glazing, which is apparent on both levels. These expanses of glass allow the interior to be bathed in natural light. Numerous bi-fold windows, together with the sliding doors, can open up the interior to the outdoors.

The home is dominated by a large open-plan great room that incorporates the kitchen, dining and living areas where the family spend most of their time together. The design is simple, comprised of robust horizontal and vertical forms which provide a clean and uncluttered look and promote continuity through the space.

A large horizontal band slices through the interior of the great room and establishes a plane that forms the kitchen ceiling, the roofline of the first floor and an internal soffit. Above this, large-paned clerestory windows diffuse light across the ceiling. This horizontal line is intersected by vertical planes, echoing the geometry of the exterior.

"By exposing these structural forms in the interior, the great room becomes an abstraction of an inner-city loft – one long, open-plan living space placed within a skeletal building structure. The owners previously lived in a loft and the exposed structural elements and openness are reflective of their experience," the architect says.

All rooms in the house open off this central living area. Design elements connect the smaller rooms to a greater whole, to the point where the spaces become smaller compositions within a larger picture, the architect says.

A lightwell adjacent to the kitchen signals the transition between public and private space. It is part of a large void and functions as a connector, leading towards the study, bathroom, laundry and garage. Steps lead to the lower level below and to the upstairs bedrooms.

Materials used to construct the interior include Australian spotted gum for the floors. It provides a warm and natural appeal, and anchors the space. White walls add contrast and create a balanced visual backdrop for the living areas. Fir is used for cabinetry in the kitchen, bedrooms and bathrooms, and also on the stair handrails. Black granite countertops appear in the kitchen and bathrooms.

This minimal palette is apparent throughout the house and using the same small number of materials serves to tie all the interior spaces together. This influenced the design of the decor.

Designer Ruth Johnson collaborated with the owners to develop the interior. They set about making an environment that would enhance the home's architectural features and provide a warm space for family life.

"The main living areas were conceived with the family in mind. The architect had used solid shapes and a simple mix of materials, so we decided the furnishings should exhibit a strength and simplicity in color and shape that would complement the design of the home," she says.

All couches, chairs and ottomans are covered in bold, single-color fabrics. Rugs and cushions add texture and minimal patterning. Artwork is a few select pieces, and prints placed beneath directional lighting. Lighting throughout the home has sculptural qualities.

The private spaces on the top floor are decorated in the same way, with the exception of splashes of color that appear on some of the walls, and draped windows in the master suite. Blinds are used almost everywhere else.

"The effect provides a continuous, clean and uncluttered living space for the family, one that feels sophisticated but still exudes a warm and inviting aesthetic," the designer says.