Art rarely exists in a vacuum – it creates a dialogue with the surroundings, and in recent times this relationship has taken on a much greater significance.

The Museum of Contemporary Art (MOCA) Cleveland has explored the connection between art and architecture in the most constructive way possible – by commissioning a new building at the gateway to the emerging uptown district and cultural hub known as University Circle.

"The precinct is home to one of the country's largest concentrations of cultural, educational and medical institutions," she says. "We believe this building will stimulate critical thinking and animate social exchange. MOCA is expanding its scope and activities on all fronts, supported by new architecture that allows for flexibility, unconventionality, and technological capacity in the presentation of contemporary art."

The 3158m2 building, which is 44% larger than MOCA's former rented space, is a four-storey structure that rises almost 20m from a hexagonal base to a square top, where the primary exhibition space is located. Clad primarily in mirror-finish black Rimex stainless steel, the facade reflects its urban surroundings, changing in appearance as the light and weather change. 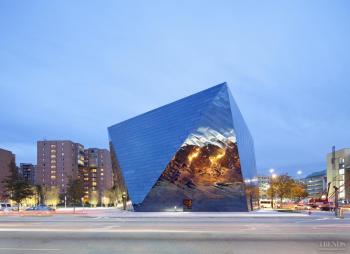 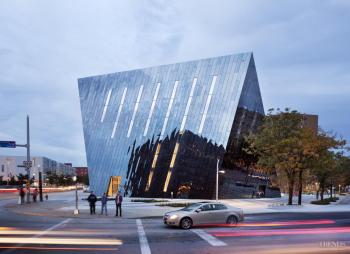 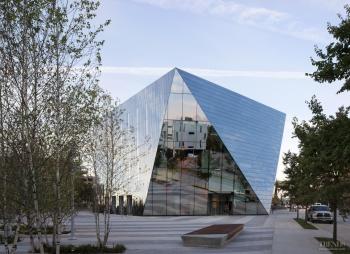 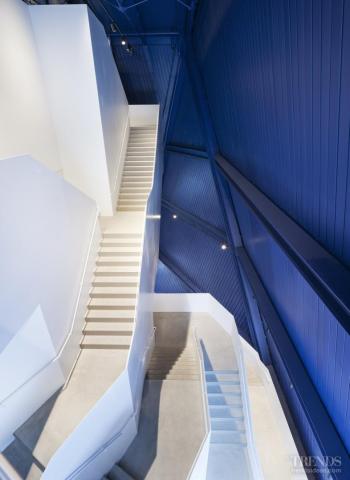 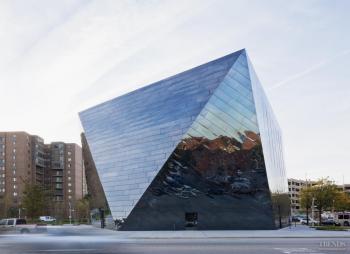 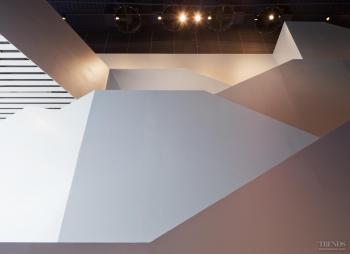 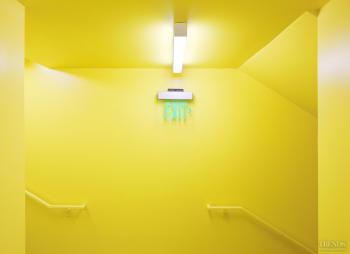 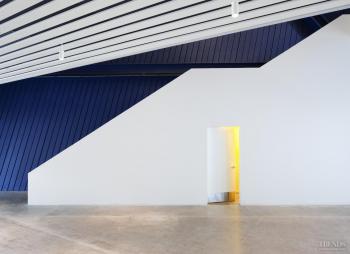 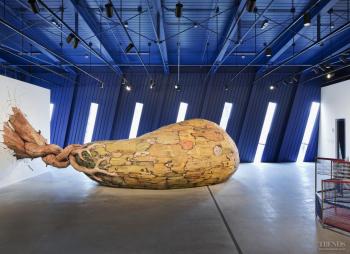 Three of the building's eight facets, one of them clad in transparent glass, flank a public plaza.

Moussavi says that museums today are not just homes for art, but serve multiple functions and host a variety of activities.

"Our design for MOCA Cleveland aims to provide an ideal environment for artists and visitors, and to foster creativity and variety in exhibitions and programmes," Moussavi says.

"Located on the corner of its triangular site, the building has entrances on all its sides to allow it to open along its entire perimeter and be used in different ways."

Synder says because MOCA Cleveland is a non-collecting institution – one of the relatively few such contemporary art museums in the country – its new building did not need to accommodate collection galleries.

"This building's design is a perfect expression for the museum's philosophy and programmes. Flexibility is key to a programme like ours that embraces aesthetic, conceptual and cultural diversity, and displays works in a great variety of media and genres."

Moussavi says visitors entering the building find themselves in an atrium where they can appreciate the dynamic shape and structure of the building as it rises. A grand staircase in the atrium, which is known as the Donna and Stewart Kohl Monumental Staircase and Atrium, is the dominant sculptural feature. This stair, which begins its ascent in the atrium, has been stacked on top of a second staircase.

"This not only creates an impressive sculptural form, but also enables visitors to chose between two dramatically different routes," says Snyder. "They can climb the main staircase, which is open to the atrium and views of the other floors, or the egress stairs, which are enclosed yet illuminated, evoking a tube of light."

All floors contain areas for either exhibitions or public programmes. The top gallery floor has no fixed dividing walls, allowing for a variety of configurations.

This floor also contains a gallery for new media work, and a lounge overlooking the plaza and uptown. Angled slot windows and wall linings enhance the edgy, dynamic feel of the space.

To celebrate the opening, the inaugural exhibition, titled Inside Out and from the Ground Up, provides an in-depth look at how a number of international artists engage with architecture and concepts of space.

"The artists in our inaugural exhibition prompt us to consider how we physically and psychologically relate to the built world – layered with all its cues and miscues. A common thread in the exhibition is vision and the body – being immersed in or excluded from spaces; the tenuous boundary between inside and outside, self and other; and the disorientating effects of shifting perspectives."

Norr says MOCA Cleveland commissioned three of the artists to question the logic of the building itself through deliberate additions, subtractions or alterations to the architecture.

"In contrast to the newness of the architecture, for example, Brazilian installation artist Henrique Oliveira's cave-like environment (Carambõxido, shown at left) is made from materials gathered from the streets of São Paulo. It appears to emerge from the gallery's walls, suggesting organic growth or parasitic invasion."

MOCA says the gallery is also hosting a number of interactive educational programmes, concerts and dance performances designed to connect diverse audiences to the art and architecture.