Seldom does a kitchen sit in isolation. Today it's likely to be an integral part of a wider living space and the center of formal and informal entertaining in the home.

The need for such integration helped to determine the design of this kitchen by Celia Visser CKD/CBDNZ. Visser says the kitchen needed to work visually with the new masonry house, which comprises a collection of cube-like volumes.

"The kitchen needed to have a similar strong contemporary look," she says. "It was also important to maximize a great view of the sea – the owners wanted to be able to enjoy an uninterrupted view from the kitchen."

Visser's solution was a sculptural, white-lacquered island that is anchored at one side by a deep column.

"The island is a piece of architecture in itself," she says. "To emphasize its distinctive form, we added an LED lighting strip that sits flush in the cabinetry and runs up the column and at right angles along the base of the overhead cabinets." 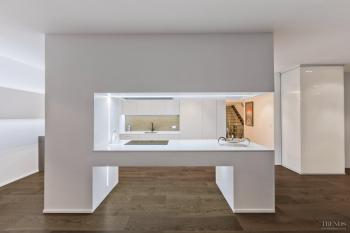 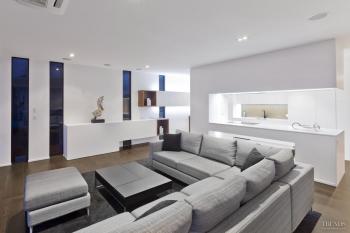 As well as providing plenty of storage, the island houses two ovens, a cooktop and a commercial ventilation unit.

"It was essential to have a lot of height between the work surface and the bulkhead to optimize the view through the living room," says Visser. "This gap would have compromised a standard ventilation unit, so we installed a commercial hood with twin motors."

Although the overhead cabinets are high, access is made easy by electrically operated cabinet doors. This also means the doors are flush, with no handles.

"It's a very streamlined, uncluttered look, which is helped by having a second fully working kitchen directly behind the rear wall," says the designer. "The owners can keep a lot of things out of sight."

Additional cabinetry in the main kitchen incorporates an integrated refrigerator and dishwasher. The backsplash features an oak veneer, chosen to match the color of the oak flooring.

Other features include a cantilevered white entertainment unit and shelving that runs along the side wall.