Moving on up Discover this article's resources 0

Back in the first half of last century, many city planners had the foresight to plant majestic trees in avenues and parks, knowing full well they would be appreciated by following generations. But while most of these trees have matured gracefully, the same cannot be said about many of the houses built at the same time.

Houses built between the late ‘20s and ‘40s are often not well equipped to cater to modern lifestyles. Some, such as the house that stood on this site in a leafy street, have deteriorated to the point where the best option is simply to start again.

The new owners of the property, photographer Louis Petruccelli and Lyn Petruccelli, commissioned architects Robert McBride and Debbie Ryan of McBride Charles Ryan to design a contemporary house that would suit their requirements. After investigating several concepts, the couple's preference was for a modern, rectilinear building – a modern classic design that wouldn't date.

"There were several practical elements that needed to be incorporated," says Louis Petruccelli. "We wanted a kitchen with a long island benchtop that would be ideal for entertaining, high ceilings, and a lap pool close to the building. We also wanted the house to make a strong statement – not just on the outside but also the interior. The house itself needed to have a sculptural quality."

McBride says much of the home's visual impact comes from its strong lines and innate simplicity. 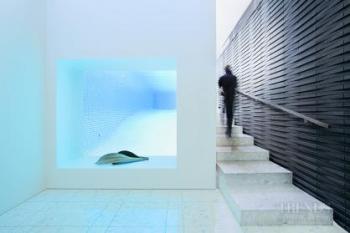 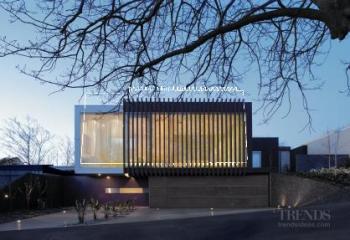 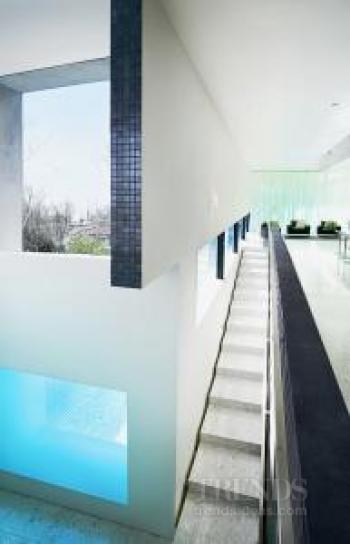 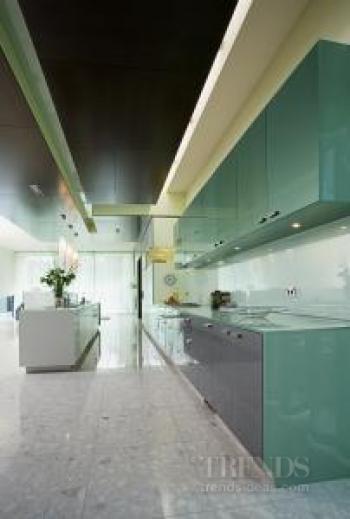 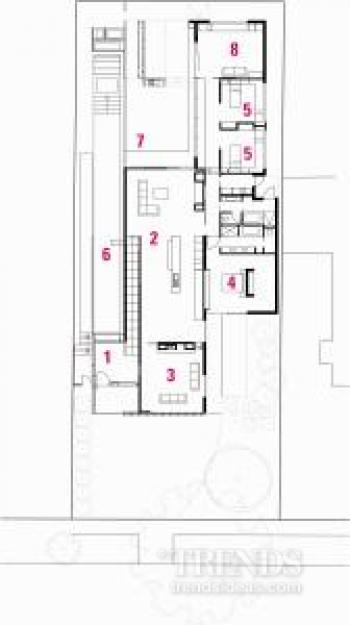 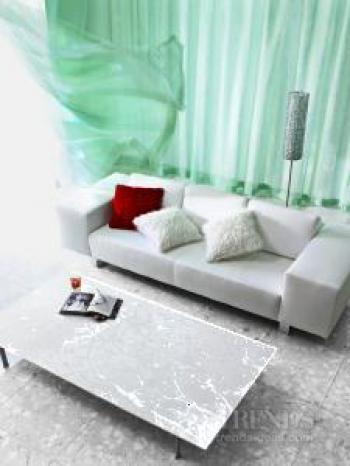 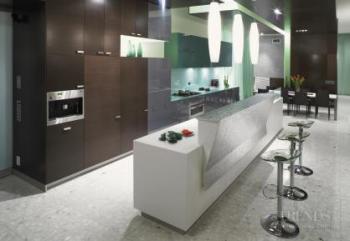 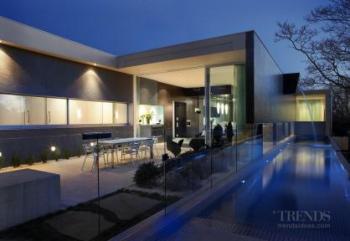 "Although modern, the house sits comfortably within its context on the street. And in some ways it is similar to a typical double-front house – the room at the front is pushed forward just as it is in many older homes. This helps break down the mass of the building and allows more light inside."

Vertical copper fins provide a degree of privacy for the main living area, yet ensure the owners can enjoy the view.

"The fins also reduce the apparent mass of the house from the street and help convey a sense of visual depth," says McBride.

Ryan says the patina of the copper, the colour of the raw fibreglass garage doors and the curved stone wall were all a response to a large oak tree, which provided the main cues for the palette.

From the outside, the entrance gives little hint of what lies beyond, however. The front door opens to reveal a large window into the lap pool, and a long terrazzo staircase leading to the living areas.

"The entrance needed to make a grand statement," says McBride. "We wanted to make that moment of entry memorable. Both the pool and the wall next to it, which extends the length of the property, accentuate the linearity of the house."

This axis is further defined by a highly sculptural basketweave wall made from narrow pieces of bluestone, and by the dramatic terrazzo stairs.

"The steps don't touch the walls," says McBride. "Introducing a shadow line on each side makes the entrance all the more exciting – it creates a sense that the stairs are floating within the space."

A translucent, watery effect is also created by the sunlight reflecting off the rippling water in the pool. The ambience is reinforced by the soft watery-green sheer curtains and milky-green glass surfaces in the kitchen.

The main living areas, which feature 3.6m-high ceilings, are effectively one large space that flows out to the pool courtyard. Ryan says the use of the marble chip surface on the axis wall both inside and out helps to blur the boundary between these two areas.

"The textural finishes on this wall change as it moves through the house," says Petruccelli. "The changing finishes define different functions."

In the kitchen, the wall features wenge panels, both vertical and horizontal. Yet beside the cooking area, the wall has a grey lacquered finish. Elsewhere the wall has a textured marble-chip finish.

A long bulkhead above the kitchen further defines the linearity of the house. Also clad in wenge panels, the bulkhead is stepped, with illuminated cutouts echoing the design of the cabinetry.