Cinema technology is light years from its conception barely a century ago. That big screen experience can now be had from the comfort of your own home

It was in the 1890s when the Lumière Brothers first pioneered the cinematograph - a device capable of recording and projecting moving images. Contrary to Louis Lumière's belief that the cinema was an invention without a future, it has become one of the most widespread forms of entertainment. Today, thanks to home theater, we don't even need to leave our homes to enjoy it.

However, gone are the days when we simply bought a television set from our nearest appliance store, and sat it in the corner of the lounge. Rooms, and sometimes entire houses, are today being designed around home entertainment and automation equipment. And, in an emerging trend, home theater systems are becoming pieces of furniture in their own right.

The home theater system in the gentleman's room featured on these pages is a prime example of how this latest technology is being integrated into modern interior design.

A 50-inch plasma television is set into a cabinet in the middle of the bookshelf, with other home theater componentry sitting on shelves below the screen. The center speaker and subwoofer are also built into the cabinetry above and below the screen.

The room has a lot of hard surfaces, including a polished concrete floor and a stone fireplace surround, which tend to reflect sound. The use of quality componentry has helped to minimise this effect. 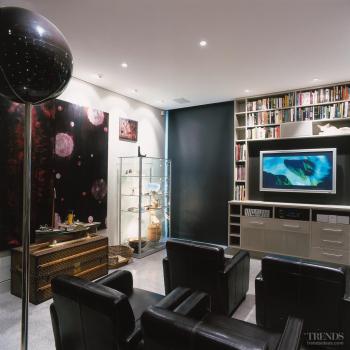 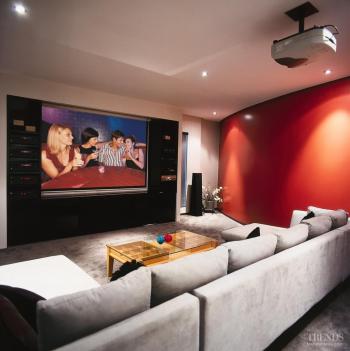 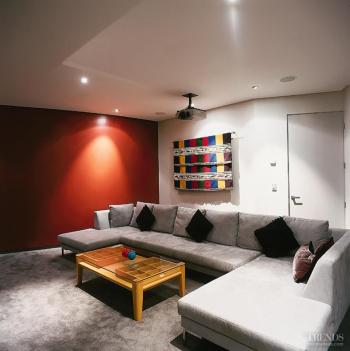 Acoustics can make a huge difference in the way sound is perceived. If your home theater room is not acoustically treated, the sound can be muddy, undefined, or harsh. For a room to be set up properly the installer needs to calibrate the audio equipment and ensure the speakers are correctly positioned in relation to the seating position.

In the rooms featured on the following pages, the owner openly displays his home theater componentry in a dedicated media room, yet conceals it from view in his master bedroom.

The media room features a projector, mounted on the ceiling towards the back of the room, and a large projection screen immediately in front of the lounge seating.

Audio-visual equipment is displayed either side of the projection screen. The owner says he likes the light source created by the flashing lights on the equipment's display panels.

Black mesh blinds block out natural light from the vertical windows on either side of the screen.

As homeowners continue to look for ways to combine entertainment and relaxation, installing an integrated home theater system in the bedroom has become a popular option.

The master bedroom has a projection screen mounted into the ceiling, which rolls up and down at the touch of a button.

The speakers are concealed in the walls, either side of the screen, with the movie projector and other home theater componentry hidden in the walk-in wardrobe.

A small hole in the rear wall of the bedroom allows the picture to be projected on to the screen.