More than a ripple

Light-blue walls and pale furnishings complement the waterfront setting of this new city apartment. They also make a tranquil, reflectivebackdrop for the owner's dynamic art collection

More than a ripple Discover this article's resources 0

Designing an apartment interior to be at one with the surroundings is a good way to bring the outdoors in. It also enhances the sense of space – especially when there are floor-to-ceiling windows and large balconies.

When New York architect Alex Gorlin was commissioned to design a modernist building that would be a beacon for the new Aqua development on Allison Island at Miami Beach, maximising the location was a priority.

"Most apartment buildings in similar developments are very flat and shallow. For this particular project, I wanted to take advantage of the bright sun and dark shadows of southern Florida. As such, the building is very sculptural, almost like a ship's prow, with deep balconies and sunshades to keep out the heat."

For his own apartment in The Gorlin Building, as it is known, Gorlin introduced the cool blue colours of the water and sky.

"Even though the apartment is on the sixth floor, the sky-blue walls and the light-grey limestone flooring make you feel as though you are right on the water." 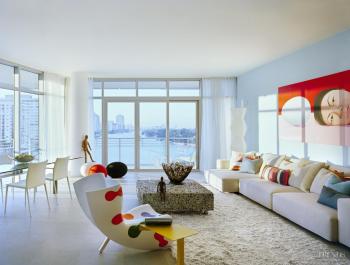 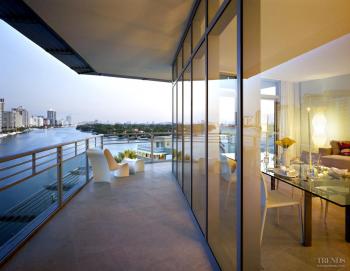 Gorlin says the watery illusion is enhanced by some of the furniture pieces, such as the Carlo Scarpa glass dining table, which provide a sense of transparency. Sheer white curtains also contribute to the watery metaphor.

"However, everything is not always what it appears to be," he says. "The stones in the ottoman are actually set in rubber, which makes it soft to sit on."

The quirky, sculptural items, which include designer lamps and side tables, are not just conversation pieces – they also give the interior a gallery feel. The Fibreglass Felt chair by Mark Newson – a curved white chair with bright spots – is the centrepiece of the living area. The colours are repeated in striped pillows on an Andy sofa.

"As this is largely a weekend home, I was equally concerned with how it looked, as much as how it felt to live in. It provided an opportunity to be a little more adventurous with the interior design," Gorlin says.

Not surprisingly, the art was a vital component, with bold paintings, sculpture and photography adding visual drama.

The interior echoes the design of the lobby and common room, where bold art and sculptural furniture contrast pale walls, and shimmering, white curtains.