To maximise this site in a beachside suburb, the architect wrapped the house within a Modernist box with a protective stone facade

Privacy, views, light, height to boundary – all these factors come into play when you're planning a new house for a site in an established suburb.

Another key consideration is the architectural vernacular – what exists in the suburb, and how is it changing?

Joe Chindarsi, the architect of this new house says the beach suburb was not always a sought-after location.

"It features a mix of old, run-down houses and expensive, new homes, so it is changing rapidly," he says. "The former house on this site was small and cramped, but we could see the site had great potential."

Owner Geoff Hayward says he had plenty of ideas to explore with the architect, but he essentially wanted a modern beach house, which would be a permanent home and easy to live in. 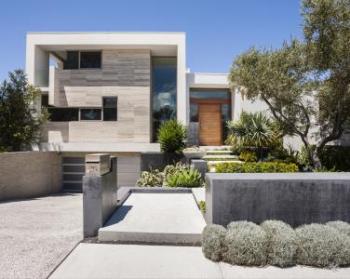 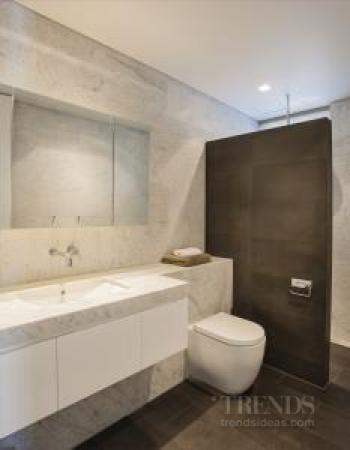 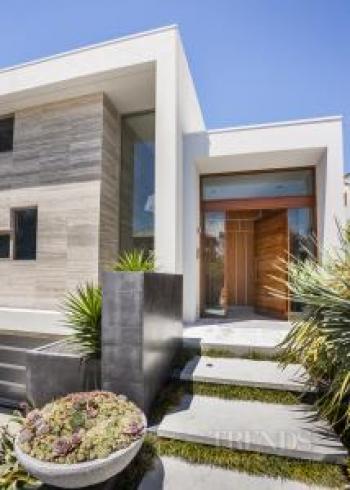 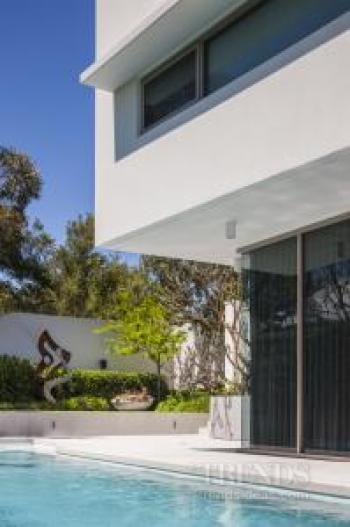 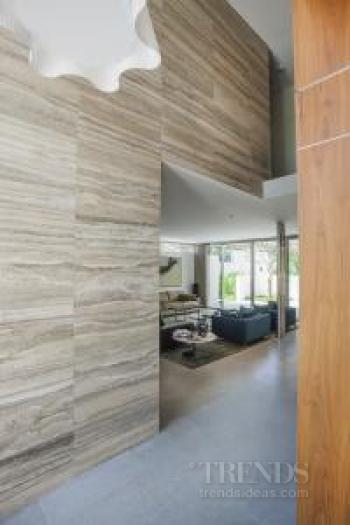 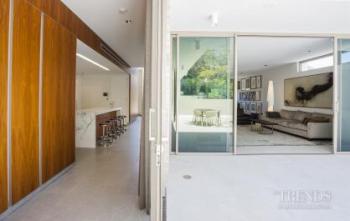 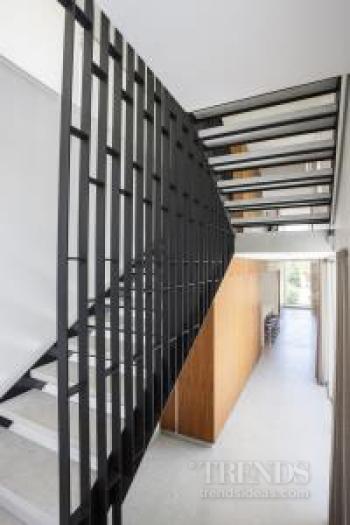 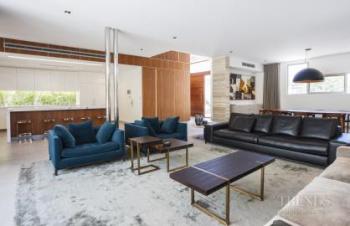 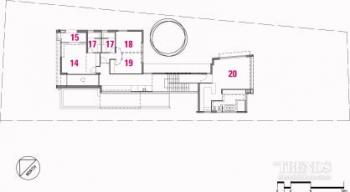 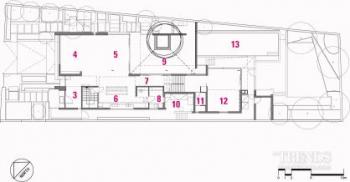 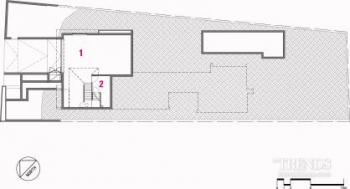 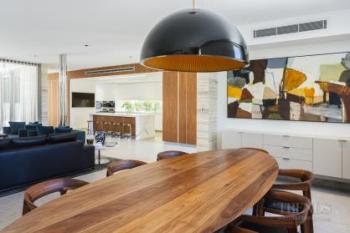 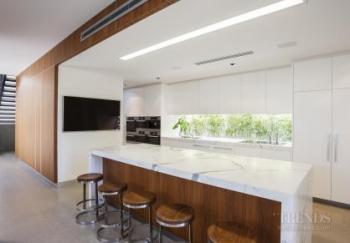 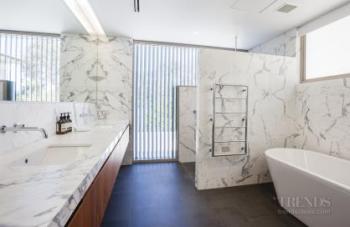 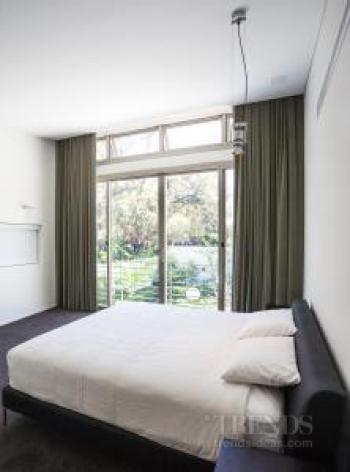 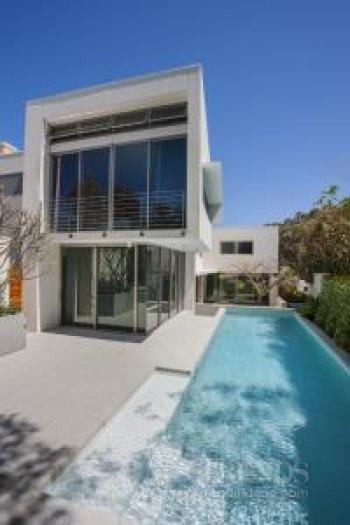 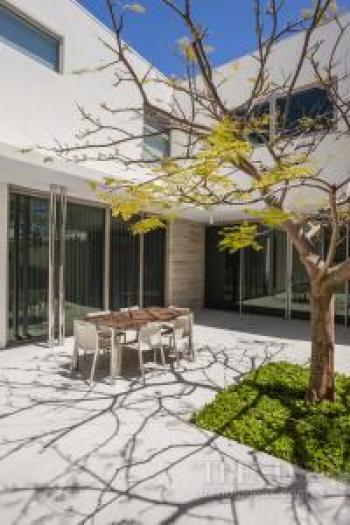 Chindarsi says the land sloped up from front to back, with the topography helping to determine the design.

"It afforded a range of levels, which we could use to break up the spaces inside and define the way the house sat in the landscape. The design of this house was not about trying to get a view, but rather creating an internal outlook with courtyards and outdoor living areas."

The architect consequently designed the main part of the house as a long Modernist box – or enclosure – that sits on a heavy block base. The box-like element features silver-beige travertine, chosen for its strongly linear grain.

"The front facade resembles the end of a tube that is lifted off the ground negotiating the landscaping," says Chindarsi. "Openings in the stone create an abstract composition that informs the placement of the rooms behind – for example, a balcony pops out from a bedroom on the upper level. And a stone wall at right angles to the facade expresses the spine that runs right through the house."

Because the front of the house is exposed to the west, and climate extremes, it also has a deep overhang. Both the overhang and the solid weathered stone ensure the facade takes on a protective role.

Teak panelling features at the entry to one side of the house – a reference to the owner's love of yachting. On the interior, additional panelling surrounds the stairs and defines the spine. These panels are walnut, with long vertical slots accommodating feature lighting.

But it is the solid travertine wall pushing through from the exterior that anchors the interior visually. This leads the way into the main living area and reappears at the back of the house, maintaining a sense of connection.

The living area opens out to a walled courtyard and a lap pool beyond – the expansive glazing also brings plenty of light into the centre of the house. To provide even more light, a long horizontal window looking onto a green hedge forms the splashback in the kitchen on the opposite side of the room.

The material palette, while mainly stone and timber, also incorporates white-lacquered cabinetry and stainless steel. There are two structural steel columns near the kitchen in the main living area.

"We borrowed an idea from Mies van der Rohe's Barcelona Pavilion," says Chindarsi. "The polished stainless steel reflects the light, to the extent where the columns almost vanish. The columns also mark the main axis, reappearing both inside and outside, but always on the same line."

A gallery leads to a media room at the far end of the house, and stairs lead up to the three bedrooms, at opposite ends of the upper floor.

"The stairs zigzag across the linking point between the two ends of the house," says the architect. "They help to isolate the programme of the rooms – the media room and pool are separated from the living area on the ground floor, while on the upper level, the master suite is separated from the other bedrooms."

Decorative stone is also a feature of the master bathroom, with statuario marble lining the walls and forming the vanity top.

"This marble has a very distinctive grey veining that gives it a crisp look," says Chindarsi. "It also brings in a little visual texture that keeps the space interesting."