Universities are like any corporate firm – they must compete for business in a tough market. But it's not only the quality of the education that gives one university an edge over another.

Increasingly, for students today, it's the facilities that create that all-important point of difference. And it's not just about the buildings – it's also about the webs that link these together to create a vibrant student hub.

These were key influences in the design of Ngoolark, a new student building at the Edith Cowan University (ECU) in Perth by JCY Architects and Urban Designers – a firm that has a long history working with the university.

JCY project architect Will Thomson says the university, which was established in 1991, made a conscious decision to compete with more established universities.

"The university looks to define itself as a cutting-edge campus that puts students first," he says. "It recognises the role amazing architecture plays in achieving its ambitions." 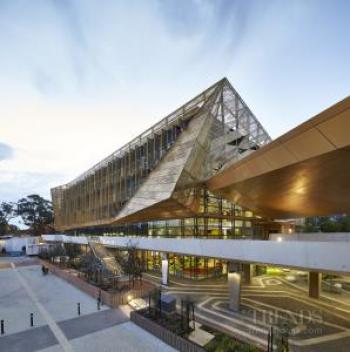 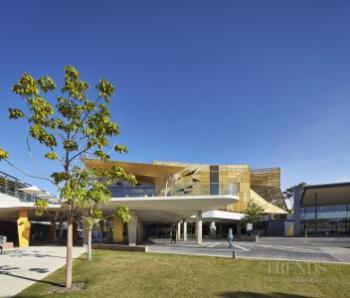 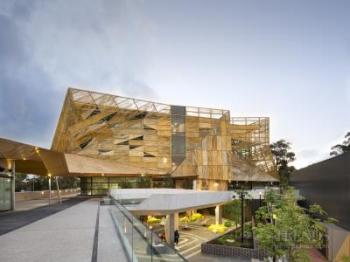 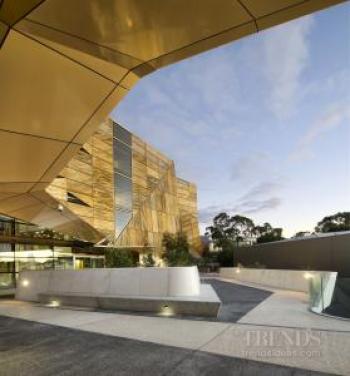 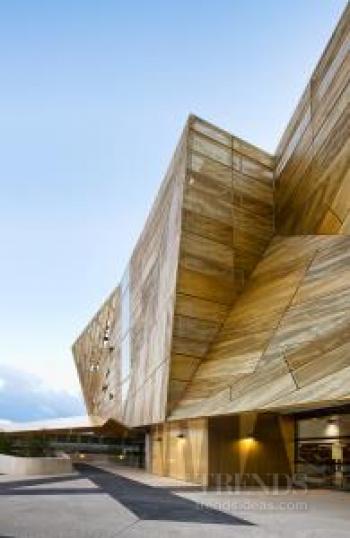 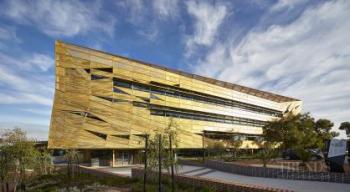 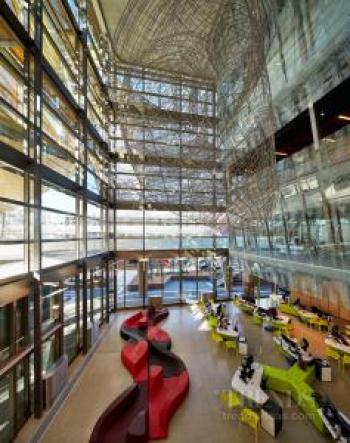 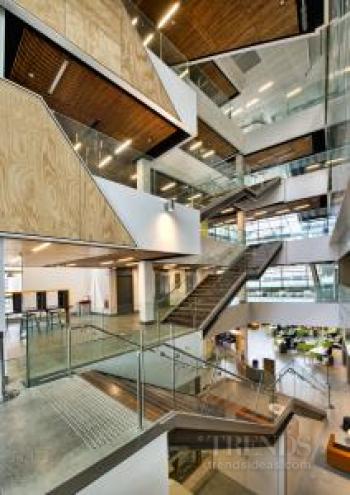 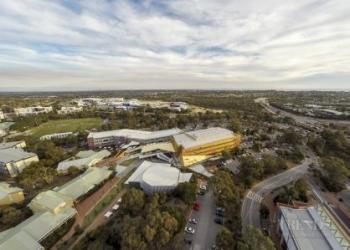 Thomson says the site was at the confluence of several important campus pathways, but there were level changes that impeded the pedestrian flow. The new six-storey building needed to absorb these changes in level so they were no longer a barrier.

"The inherent level changes also gave us exciting opportunities – to create formal and informal landscaped areas that would link to create a campus street filled with both active and passive spaces."

The building was consequently designed with a vast forum-marketplace level and an elevated podium level. These two areas are connected by generous stairs and by the building's vertical spine, created by a lofty atrium on the east side.

With the university's desire for iconic architecture and a connection to the local "place", JCY took design inspiration from indigenous fauna of the region and cultural themes from the local Noongar Aboriginal people of the South West of Australia.

"The building takes its name from the Noongar word for the endangered Carnaby's black cockatoo – the Ngoolark," says the architect.

"The materials reference this, and other elements from nature. For example, the golden perforated aluminium veil that wraps around the upper three levels of the building is based on the shimmering scales of a butterfly wing. The panels were designed as a continuous skin, which was folded and modulated as it was laid in place around the building. The fabric was then stretched and rolled to the east to become a floating sculptural roof of the café on the upper podium."

But while the veil itself references a butterfly's wing, the perforated patterns on it are derived from the curved overlapping feathers of the Carnaby's cockatoo. These are represented as solid and void in the gold veil.

"This creates a rich patina externally, along with wonderful shadows and silhouettes on the interior as they reflect light, colour and shade in myriad patterns around the building."

These patterns are reinterpreted in the white ceramic frit on the external glazing behind the veil, while a local honey-eater, or jindee, is patterned onto the frameless glazing in the five-storey atrium foyer. The pattern is also echoed in a bespoke carpet design.

"There are further local references in the landscaping of the podium and forum," says Thomson. "The paving embodies the flow of water through the site, complete with eddies and eroding rocks. The silver granite pattern inlaid into dark charcoal concrete references the name Joondalup, which translates to the silvery light of the moon reflected on water.

"The podium's folded and sculpted white concrete soffit and facetted columns appear eroded and opened up, just as they would be in nature. We also added seven eucalypts that will provide a leafy shade canopy and dappled light."

The architect says Ngoolark has not only changed the entire campus by introducing a integrally connected civic building and precinct, but it has also changed how surrounding buildings and precincts operate. There are new physical connections between the podium and library, coffee shop and lecture theatre, as well as direct links to other buildings, roads and car parks.

On the inside, Ngoolark incorporates the Student Services Centre, a public zone, sophisticated office accommodation with open-plan workplace environments, collaborative spaces and breakout areas that open out to the atrium. The building has been designed so it can be converted easily into classroom and teaching spaces if required.

ECU manager of asset delivery Clark Randrup says Ngoolark brings together all of the student services facilities, which were previously diffused and scattered around the campus.

"Centralising these services has not only benefitted students and staff, but has also freed up that former office space for other uses, such as research facilities. The guild – student union – has moved into the new building as well, which gives guild staff much easier access to students and vice versa."

"We went well above the Australian disability standards throughout the building. It incorporates numerous special features for people with a range of disabilities."

Consultation with the local Noongar community was another key element of the design process.

"We undertook a lot of workshops with the local community to ensure we were referencing the culture appropriately," says Thomson. "This helped to create a real sense of place and ownership."

Sustainability was also a design driver – the building has been designed to achieve a 5 Star Green Star rating. Key features include double glazing, a high-performance curtain wall and displacement heating and cooling. A building management system integrated into a campus-wide management solution tunes and monitors the building.