To complement a neighbourhood of heritage properties, this new development presents a contemporary interpretation of a traditional Queenslander

Retaining the character of a heritage area is a priority for most local governments, and it's even more critical when the new has to sit right alongside the old.

Such was the case with this new development behind Southbank in East Brisbane. Architect Angus Munro says the four townhouses, developed by builder Charlie Woodward, are within an established neighbourhood of heritage properties.

"It is very much a character area, and the new architecture needed to acknowledge this," Munro says. "The traditional Queenslander typology provided the inspiration for the design – the concept of the big roof, shaded veranda and sandstone base is still a valid response to the subtropical climate. But we have created a modern interpretation with vertical cedar cladding, rather than horizontal weatherboards, and a folded zinc roof that wraps down to enclose bedrooms on the top level.

"The individual houses help reinforce the existing subdivision patterns and traditional building forms on the street. And although they are modern in character, the houses have a form and scale that are sympathetic to the more traditional buildings."

Contemporary veranda elements are created by a wide concrete portico at the front of the house and a large terrace that appears punched out at the rear. Both recesses feature deep, white-painted reveals that contrast the texture of the cladding, highlighting the different qualities of the two materials, says Munro. 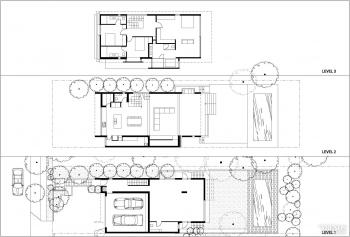 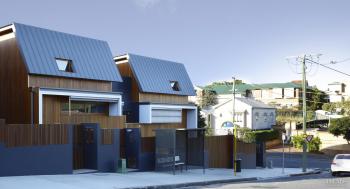 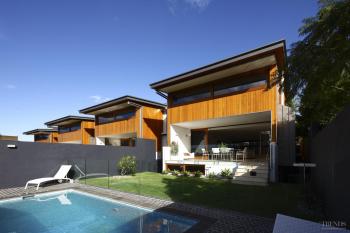 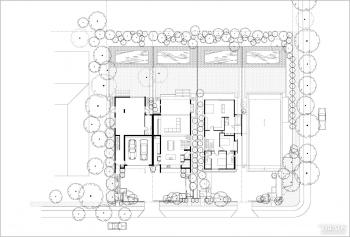 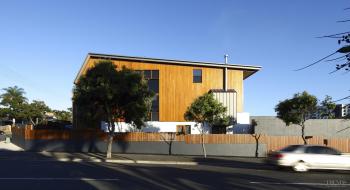 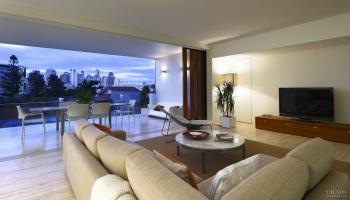 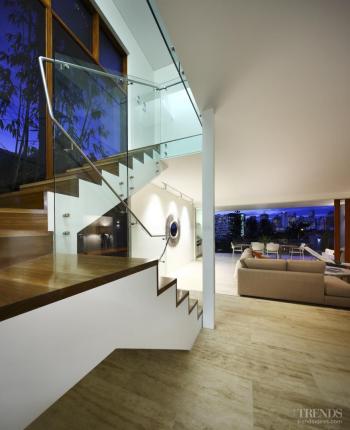 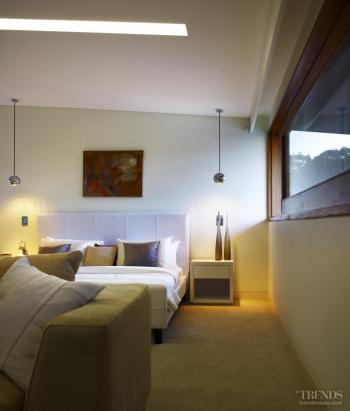 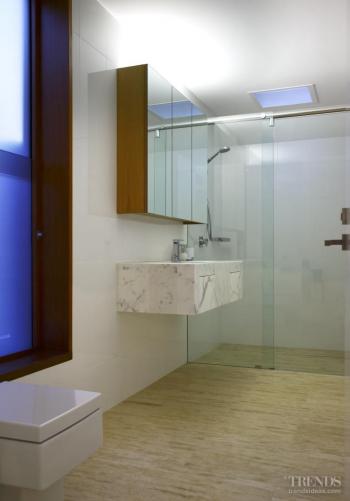 "We modulated the street facade with hoods, gutters, projecting fascias, and batten screens to cast shadows as well as creating depth," says Munro.

"We also put a modern spin on the detailing that you see on a traditional Queenslander. The zinc roof has a folded edge profile and timber soffits, not just a typical fascia and gutter."

To ensure the house would have a close relationship with the outdoors, the ground at the front of the property was excavated, with the earth used to build up the rear garden. This meant the living areas could flow straight out to the garden, through 7m-wide sliding doors. It also reduced traffic noise from the street below.

"Even though the house has a great view across to the city, we wanted to follow the Japanese idea of creating your own foreground, which enhances the perspective," says the architect. "And providing lawns for each house, rather than having a shared green space, allows individuality – this house has a pool, for example.

"There is also a generosity in providing a living area that flows outdoors. The living space is effectively doubled."

Travertine flooring flows right through the living areas to the terrace, further enhancing the seamless link between inside and out. Double-height glazing in the stairwell also provides a view of the wider outdoor landscape, and ensures plenty of natural light falls into the heart of the home.

The interior is defined by sleek, simple styling and a warm, neutral palette of materials that retains the contemporary feel. The lighter elements are contrasted by rich New Guinea rosewood door and window joinery, chosen for its structural stability and suitability for the climate.

Lacquered cabinets are teamed with Calacatta marble benchtops in the kitchen. The same marble appears in the bathrooms, where it forms custom-designed, cantilevered vanity units. Other key features of the master bathroom include an integrated sunken spa bath.