Although this new house has a modernist architectural style, the symmetrical elements and painted brick exterior reference the more traditional residences in the neighborhood

It's a question often posed – how will a modern design sit in a neighborhood of traditional residences?

For this project, the answer lay in both the design of the house and the material palette, say architects Larry Woodson and Lelia Gilchrist, principals of Woodson Gilchrist Architects.

"The property is situated in a street of very grand, heritage-style homes, so this was always going to be a modern house in a very traditional context," Woodson says. "We chose to embrace that dichotomy by designing a house that would uniquely respond to the environment and not simply ignore it."

Even though the owners wanted a modern house, they wanted it to be glamorous. They also expressed an appreciation of symmetrical architecture, which is a key feature of the neighboring properties.

"The front facade that presents to the street is highly symmetrical," Woodson says. "Entry to the house is through a courtyard and loggia with a central opening and symmetrical pillars – effectively a modern interpretation of the traditional." 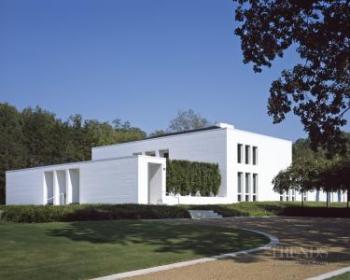 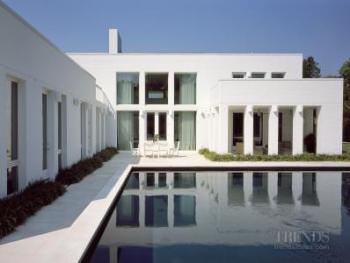 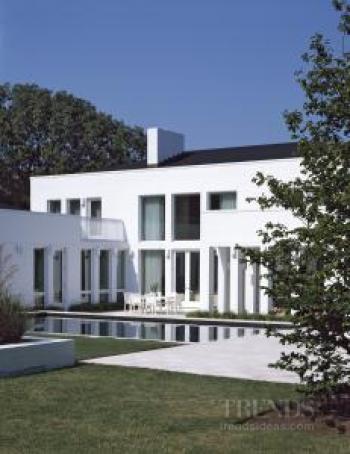 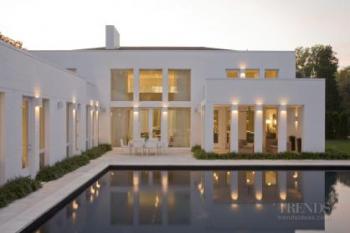 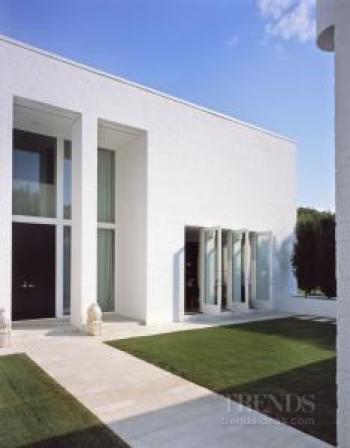 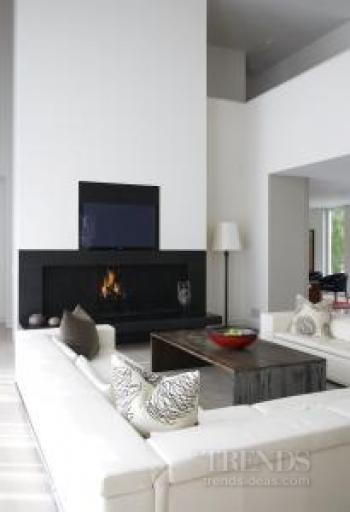 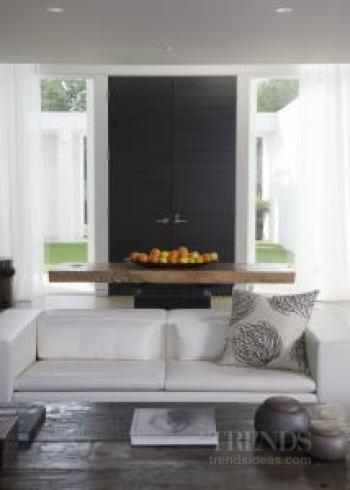 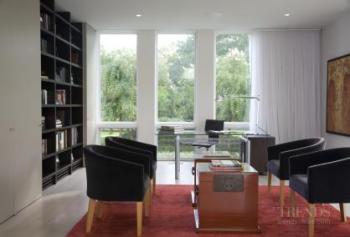 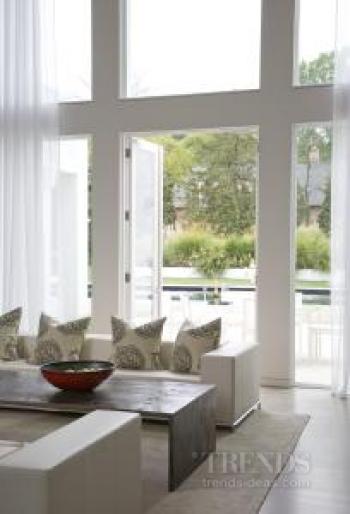 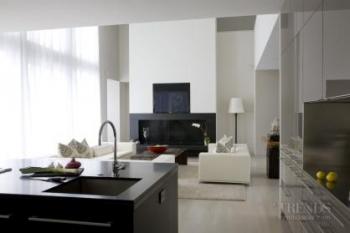 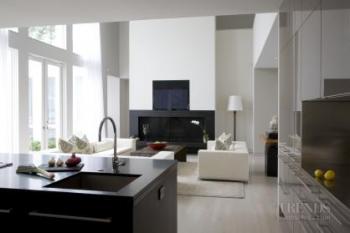 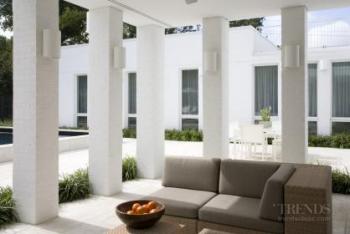 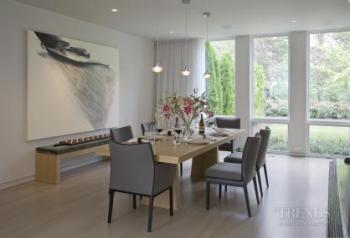 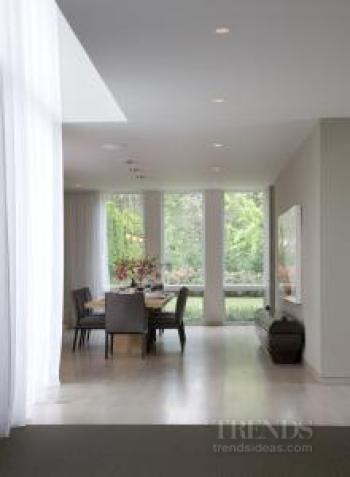 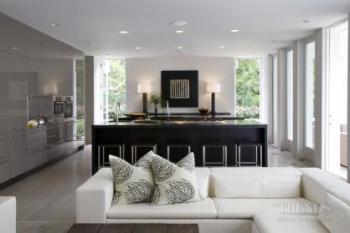 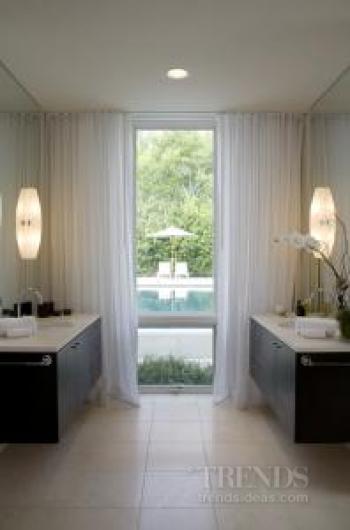 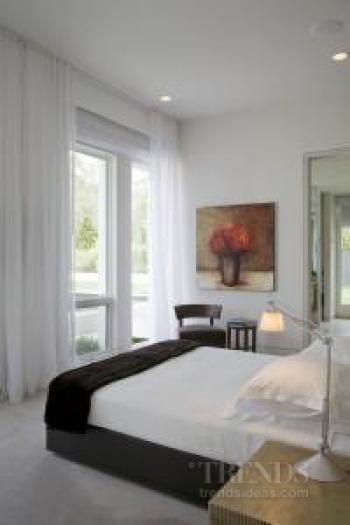 The vertical windows are another nod to the neighboring properties.

"These differ from classic modernist architecture, which usually features horizontal windows," says Woodson. "The verticality is quite severe. In design terms, it also orders the house – the windows appear to march down the side of the building, much as they do in the traditional houses. But the modernity can be seen in the use of large glazed panes, rather than lots of small panes."

The white-painted brick exterior is another visual link to the neighboring houses, which are mostly built of brick to combat the extremes of temperature.

The other key driver of the design was the owner's desire for landscaped outdoor living areas. Woodson says the front courtyard was influenced by this requirement.

"With its green lawn and tree border, this courtyard is a Zen transition space –people passing through it leave their cares behind and enter another realm."

The double-height entry features square-edged pillars, which reference the design of old-style porches.

"The architecture plays off a familiar pattern," says Woodson. "The pillars create a sense of solidity and permanence, just as they do in a traditional house."

On the interior, the house is defined by its spacious, open-plan living area and seamless connection to a pool terrace.

"This is not a formal interior, with a separate living room for entertaining guests," says Woodson. "It's a very open, flowing space with a European kitchen that is very much on display, rather than hidden from sight."

Interior designer Katy Chudacoff of Dovetail Design Works, who worked alongside Woodson from the outset, says the owners can be described as modernists with a keen eye for good design.

"The owners are well travelled and their exposure to international design trends was a strong influence."

To create a minimalist yet warm look for the interior, the walls are painted in a light gray tone, and the floors stained to a gray wash that was color matched to a piece of sun-bleached driftwood.

"The soft gray is warmer than a pure white, which would have reflected too much light around the rooms," Chudacoff says. "Rather than cube off the rooms with different color treatments, we have taken the gray right through the house. This gives the interior a more sculptural look, and it reinforces the sense of tranquility created by the symmetrical elements."

To add further visual warmth, the designer mixed modern furnishings with antiques. Antiquities from Indonesia are also juxtaposed with contemporary art – part of a growing collection.

The Poliform kitchen, which features dark wood and taupe cabinets and matte black granite countertops, presents a bold contrast to the light tones of the interior.

"The owners love to entertain, and the kitchen is the social hub of the house," says Chudacoff. "The kitchen is large enough for more than one person to work in it at the same time, and it flows out to the terrace and an alfresco dining area."