Traditional brownstone houses in key urban locations are eagerly sought after for remodeling projects, with good reason. They have plenty of character, charm, and just as importantly, potential.

The owners of this brownstone in New York City went looking for just such a house, in original condition, to remodel. The house they found was typical of the style says the design team, which comprised principal Donald Billinkoff and project architect Yvan Prokesch.

"It was originally a single family home, but it had been subdivided many years ago into a series of small apartments," says Billinkoff. "There were at least two apartments per floor, and a rabbit warren of small rooms. The interior was in very poor condition, with sagging floors and dilapidated framing. There had probably been no work done for 50 years."

Although the house needed to be gutted and rebuilt, the character of the exterior was left intact, as required by local regulations. Windows were replaced with copies of the originals to retain the original facade. The interior, however, was a different story.

Billinkoff says the clients wanted a sophisticated urban look that would be a counterpoint to their casual, informal country house, which he also designed. 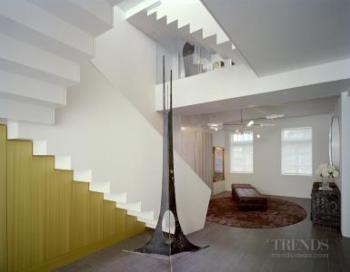 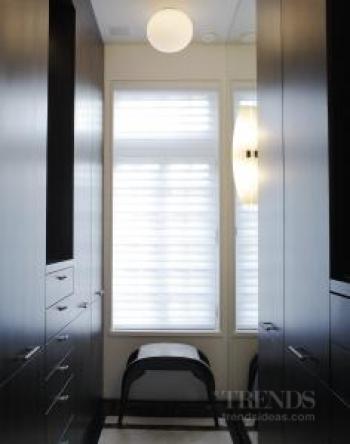 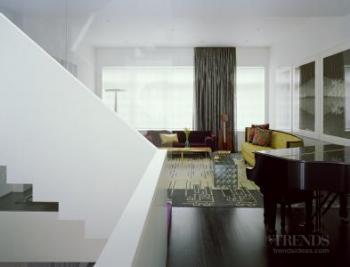 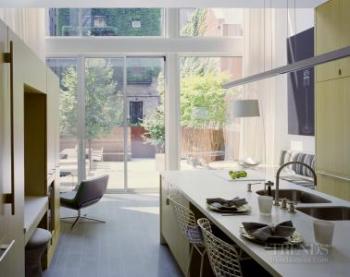 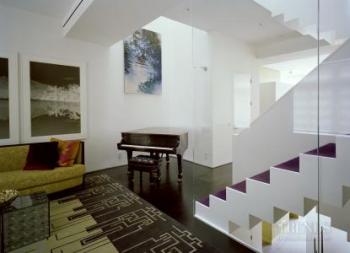 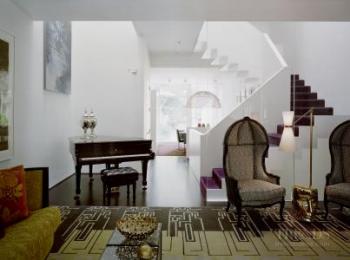 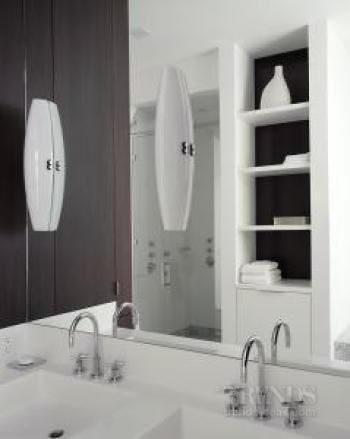 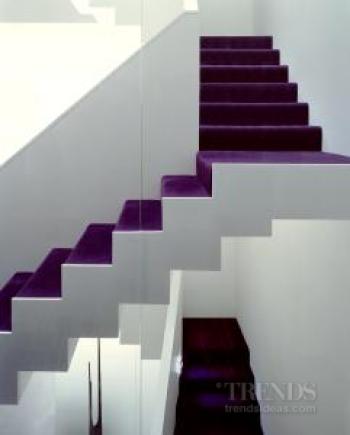 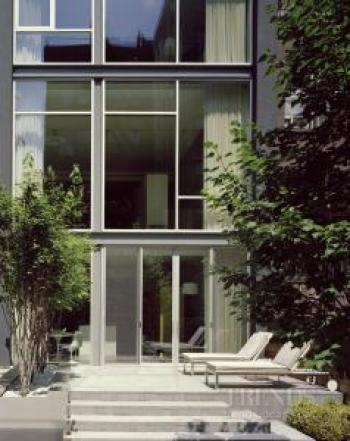 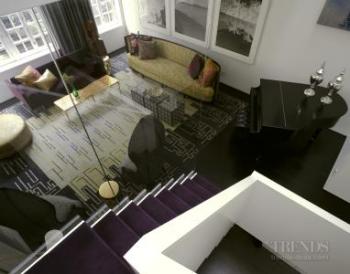 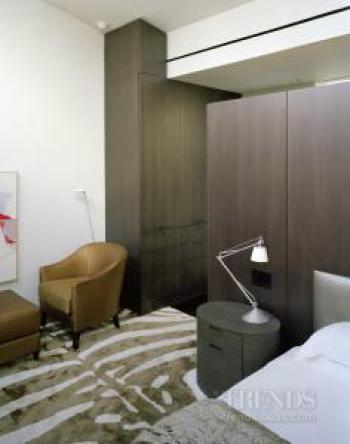 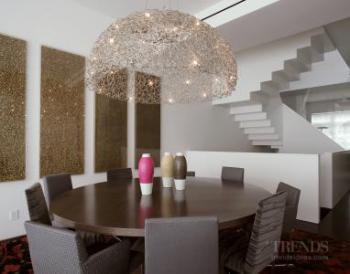 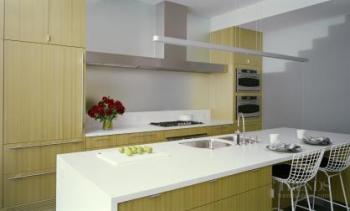 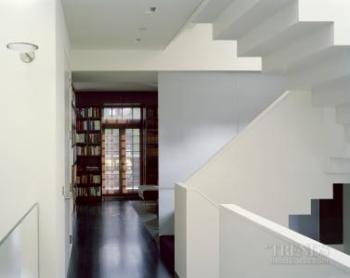 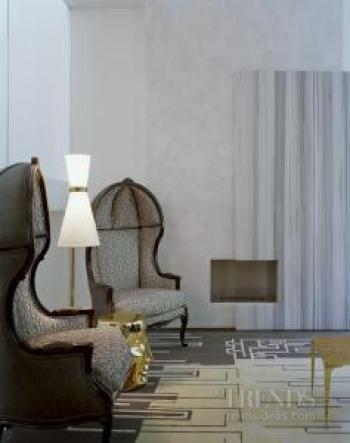 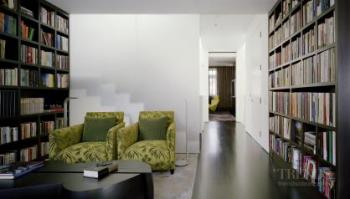 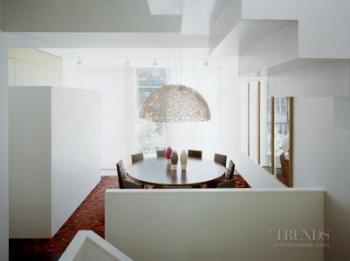 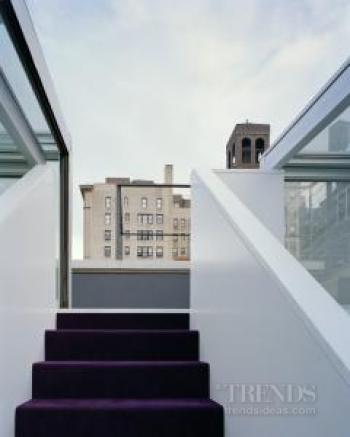 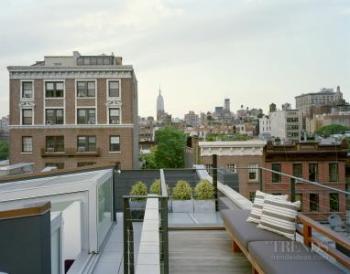 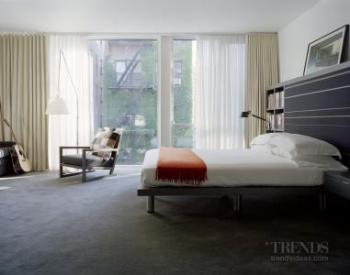 "They were anxious to rethink the whole idea of a brownstone, and how the interior is organized," he says. "These houses traditionally have a parlor floor with high ceilings at ground level, and bedrooms above. And circulation is via a staircase positioned against one wall. With every floor the same, it can be difficult to know exactly which floor you are on. For this project, we chose to do something completely different, by exploring the notion of a vertical loft."

The design team consequently opened up the middle of the house, creating a central atrium that accommodates a new sculptural staircase.

"Opening up the space vertically provides vistas through the house, and creates a sense of transparency as you move up and down," says Billinkoff. "For this reason also, there are etched glass walls in several areas that allow the light to pass through, while still providing privacy and an air of mystery."

The feeling of anticipation begins in the spacious entry hall, which features a large mid-century wall mirror by Neil Small. With its three-dimensional wedge shape, the mirror adds a touch of drama by distorting images of the sculptural staircase and its bright eggplant-colored carpet. The ziggurat form of the staircase and a tall sculpture help to draw the eye up towards the living areas on the second floor. The kitchen, however, is on the first floor, beyond the entry to the house.

"This room opens directly to a garden on the sunny side of the house," says Billinkoff. "We added a double-height ceiling above the casual dining area in the kitchen, and glazed exterior walls that allow plenty of light inside. The extra height means the rather narrow kitchen seems less like a tunnel. It also opens up the space and the garden view to the formal dining room on the floor above."

To provide visual continuity, the Tabu wood veneer on the kitchen cabinetry extends into the entry, where it follows the ziggurat shape of the stairs, concealing storage cabinets.

Billinkoff says exposing the shape of the stairs on the underside reinforces the sculptural look and makes the interior more exciting.

"Brownstone stairs typically have a sloping underside, which is quite boring visually. Essentially, we have inverted the stair, which creates an interesting play of light and shadow at different times of the day and night. Lighting on the underside of the stairs makes them seem a lot more sculptural at night."

By day, a retractable skylight at the top of the stairs allows light to flood the atrium space, and the rooms that flow from it.

"Another benefit of having the stairs in the center of the house is that the floors don't feel as long and narrow as they do in a typical brownstone," says the architect. "For added interest, we also alternated the way the stair rises from each floor – from right to left and vice versa."

The third floor accommodates two guest bedrooms and the fourth floor has a library and a media room. The master suite occupies the entire fifth floor, which in turn leads to a roof terrace. This is accessed through the retractable skylight.

White walls and ceilings, and dark wenge wood floorboards reinforce the art gallery look of the interior. The effect is also enhanced by eclectic furnishings from different eras, including modern classics.