Inspired by the heritage of the surrounding region, this traditional brick-clad exterior conceals a more open and flowing interior floor plan

Creating a comfortable living environment is one goal of conscientious residential architecture. Home designs that are also sympathetic to site, heritage and environment have a positive social benefit, adding depth, character and value to a neighborhood.

With its traditional appearance a deliberate nod to the collegiate architecture of some of the East Coast's finest schools, this 12,000 sqft mansion adds even more amplitude to a region already renowned for its compelling architectural heritage.

Marcus Gleysteen, the home's designer, has for many years designed homes in and around New England.

"This particular residence required extensive research. Our design team has an in-depth knowledge of current and historic architectural practices, but with this project we literally went to school to determine how to best relate the design back to the region," says the architect.

"In particular, we spent time studying the 19th and 20th Century buildings at nearby Harvard. Homes like this are a tremendous amount of fun. They are good for the neighborhood and a contrast to the cookie cutter, quasi-colonial homes that seem to be taking over smaller towns. The design of this house has its own freestyle manner. It reflects and supports the eclectic yet significant identity of the surroundings," he says. 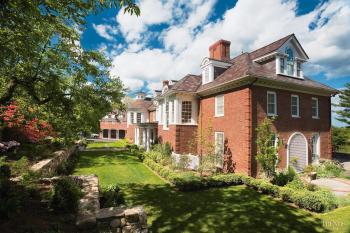 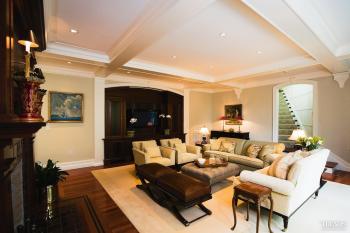 Therefore, while the home's red brick exterior portrays a traditional air, the interior layout was designed to meet a number of needs, based around different levels of occupancy.

Originally another home stood on the building site, and the project was first conceived as an extensive remodel. However, upon investigation of that structure it was found to be compromised by rot. All that could be salvaged were three fireplaces, the front door and some of the foundations.

At first glance the home appears Georgian in style, a symmetrical composition enriched with classical detail, but Gleysteen says this classification is too rigid.

"This residence continues in brick what we have done with shingle – which is to wrap a modern floor plan in a contextual, or a vernacular, reflecting skin. A second look at the project reveals that it is too organic and pragmatic in its organization to be classified as a true Georgian," he says.

"Georgian homes impose themselves in a self-idealized way, with severe symmetry and balance. In those houses, pragmatic needs come second to order and crushing symmetry."

Sited on 1.2 acres of land, the home is long and thin – a response to zoning regulations that govern how far back from each boundary it is permissible to build.

"There is symmetry in the design," says Gleysteen. "There are the salt and pepper stair towers – one circular, and one square with a Palladian window, but in essence this is a modern house in classical clothing."

At the back of the house is a large collection of glass doors and double-hung windows. Interspersed with white-painted columns, they allow all of the home's back rooms to communicate with the exterior terrace.

This expanse of windows ensures a light-filled interior and access to the surrounding views. Other details typical of the New England vernacular are present: exterior stone walls, brick rooftop chimneys, dormer windows and white trim.

"The home features some of the layout techniques common in shingle-style homes, where spaces are placed where they are needed, rather than where they have to be," he says.

Besides providing a design that could accommodate parties with up to 300 people, Gleysteen had to ensure a comfortable living environment when the house was occupied by only two people, or for larger family gatherings.

"This is a home for the family to grow into. It's designed to be comfortable, and can be compared to a Russian Matryoshka doll. Inside the large house is a medium size house, inside the medium house is a small house," says the architect.

While the large house includes public, formal and entrance areas, the medium house centers on informal dining, the family room, the kitchen and dining room. The kitchen is the interface between the formal and informal areas.

When the home is occupied by just the owners, the main living areas include the kitchen, informal dining and the master bedroom, which is connected to the family room and kitchen below by a secondary staircase.

For efficient energy management, the air conditioning and heating were carefully zoned so different parts of the home can be put to sleep when not in use.

"Essential to the success of a large-scale project is a high level of detailing and finishing. Because of the home's scale, any errors or lack of thought can be hugely magnified."

Throughout the home, the attention to detailing can be seen in the parquet and bordered floors, the wainscoting, crown moldings, fireplace surrounds, cabinetry, windows, doors and ceilings.

"One thing I learnt early on is that it's important to spend money on the things you touch all the time, such as hardware and doors," says the architect.

"It's also essential to design ceilings with textures and zones. In the kitchen, for instance, the zones created by the painted tongue-and-groove boards give the hanging pendant and the recessed light fixtures something to relate to."