Modern, cantilevered home makes the most of coastal site

Modern, cantilevered home makes the most of coastal site Discover this article's resources 0

Sometimes with great architecture, it can be almost as much about what you don't see as what you do. Here, the owners had bought a spectacular, if remote, cliffside property and asked designer Darren O'Neil to shape a house to match the site – but there were constraints to overcome.

"I had designed another house for the couple many years ago and so they asked me to undertake this project – a modern, highly sustainable home on an isolated site," says O'Neil. "However, the idyllic position also included important national archeological sites and to complicate things further, protected pohutakawa trees were threaded through the site. All this together meant the design had to make as light an impact on the land as was possible."

O'Neil actually came up with sketches for the house on the back of a napkin in a matter of minutes. However, while the form of the home is uncomplicated to the eye, it required extensive behind-the-scenes engineering to make it all work.

"To minimise impact on the land and to avoid so much as touching a single pohutakawa root, we designed the home as two cantilevered forms, loosely forming a t-shape, with a solid concrete core or base," he says. "The idea was the house would have a clean-lined, sculptural presence of its own while the cedar cladding – particularly as it silvers – would connect with the trees all around."

It is the walls of the simple, elongated wings that hold the secret to the extreme cantilevers that stretch out to the views. 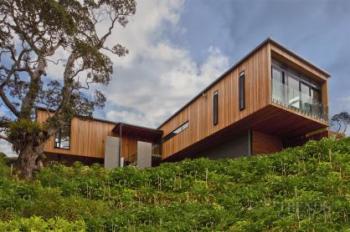 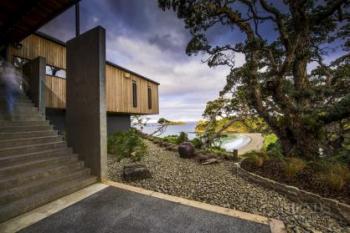 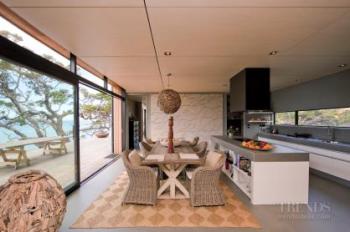 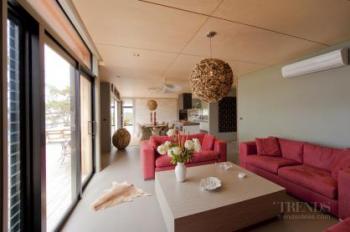 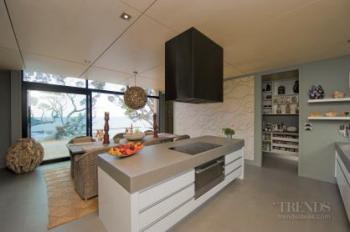 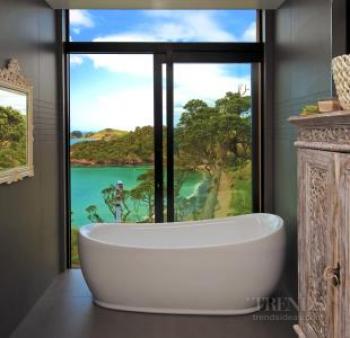 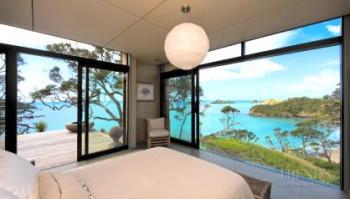 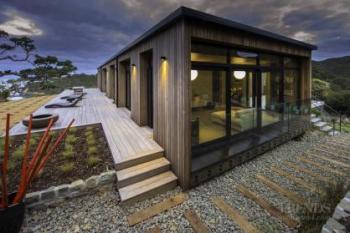 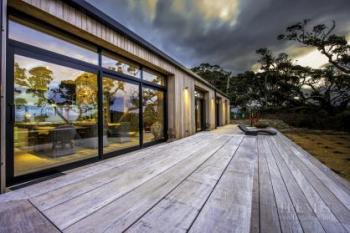 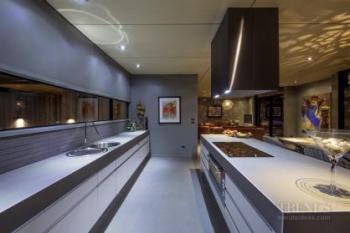 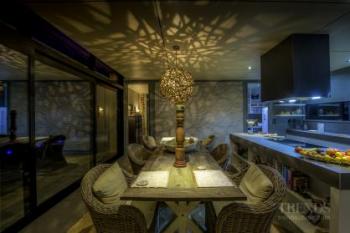 "Even with a solid concrete base as an anchor there is no way these forms could maintain stability by a simple base frame. Instead both structures are fully supported by a steel latticework structure running through the walls – much like that seen on an exposed metal lattice bridge."

In terms of aesthetics, the cedar panel used for the cladding was specified in 3m lengths, meaning there are no breaks in the finish on any single facade. While the cedar connects with the trees for a relaxed look, O'Neil finished the windows in black to add definition and sharpness to the design – so it will never look dated.

Contributing to the clean look, O'Neil inset all the window and door openings by several centimetres. This provided solar shading without the need for eaves jutting out beyond the wall planes.

In terms of layout, the longer of the two forms has the master suite at one end and guest bedrooms at the other, with living-dining-kitchen spaces all in the mid section. A long deck serves this wing.

The other, shorter cantilever to the rear includes two further bedrooms, and other ancillary spaces. This wing also has its own sheltered outdoor balcony.

If the structure of the home makes the most of the site and outlooks, so too does the interior design. The finishes are strong and natural – emphasising quality while letting the scenery take visual prominence.

The floor of the home is in an Italian porcelain tile throughout, as are the benchtops and splashback. The floor tiles are in a 1m2 format, laid with a slender grout line for a slab-like finish. The island countertop is one 3m-long tile.

The glazed Italian poplar wood ceilings are another feature of the interior design.

"While the window glass runs floor-to-ceiling, we worked with standard-sized sliding door frames. This saved money on over-sized custom systems and allowed for the addition of clerestory windows. Banks of louvres provide cross ventilation."

Perhaps the biggest surprise of this architecturally dynamic and remote house is that it is effectively off the grid.

"Energy efficiency is integral to the design," says O'Neil. "The house includes double glazing and high-spec insulation throughout. A bank of 22 solar roof panels covers all of the home's electricity needs and even attracts an on-going power company rebate."

The house stores enough rainwater for the owners through three storage tanks in the concrete basement and recycles grey water for garden irrigation. And there's also a three-cell sewage treatment system.

Strong, solid and light on its feet, this home is built to last – from its softly greying cedar cladding to the inclusion of a lift for the owners to use in the distant future.