Encased in a suit of vibrant glass, the Netherlands Institute for Sound and Vision draws together audiovisual archives, a museum and offices in one cubic superstructure

Bringing together distinct institutions under one roof can provide an architectural challenge. On one hand, the facilities need to retain their individual personality, on the other hand, the encompassing building needs to have a presence all of its own.

The Netherlands Institute for Sound and Vision's simple geometric form provides a giant-sized welcome to visitors to the sprawling Media Park in Hilversum. Not a park in the conventional sense of the word, the Media Park is in reality a commercial estate for television studios and offices situated 35km outside of Amsterdam.

As an entry point for the Media Park, the building had to make a strong impact. To achieve this, graphic designer Jaap Drupsteen was asked by the architects to create an eye-catching exterior feature for the superstructure. What resulted was a colourful skin of glass panels displaying images from the history of Dutch television. Project manager for Neutelings Riedijk Architecten Frank Beelen says the architects wanted the images to contribute to the monumentality of the building.

Drupsteen, Neutelings Riedijk and Hans van den Berg of Sound and Vision chose 748 images to be repeated on the facade. To create a cohesive whole, Drupsteen utilised a computer program to blur the images, while also arranging them in terms of colour. The definition of the images is produced as a relief on the glass. Drupsteen manipulated the images following a formula that ensured the tones of the panels link visually across, and right round, the building. This gives each glass panel an individual position within the composition. Drupsteen handed his designs to the TNO research institute, which fine-tuned the jpeg files for glass manufacturer Saint Gobain to print. 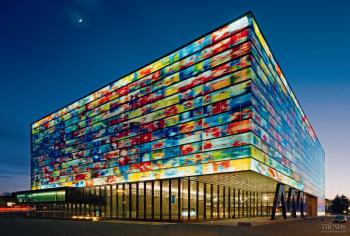 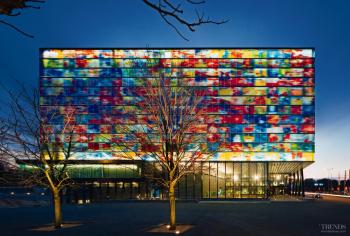 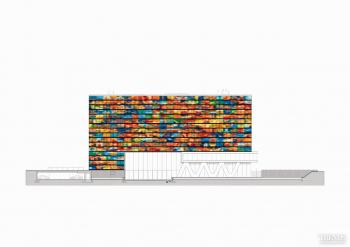 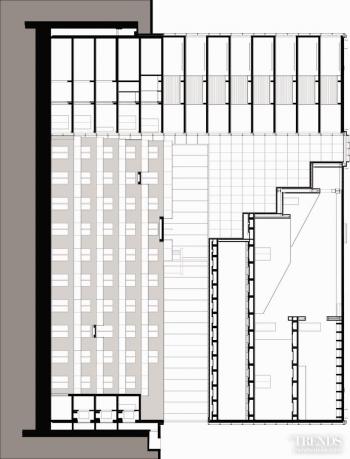 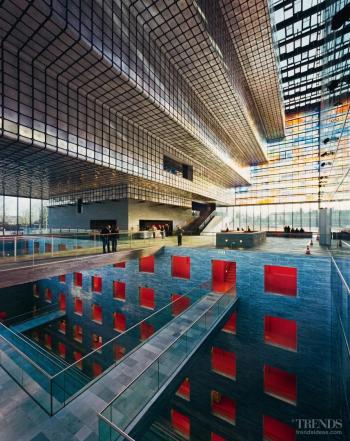 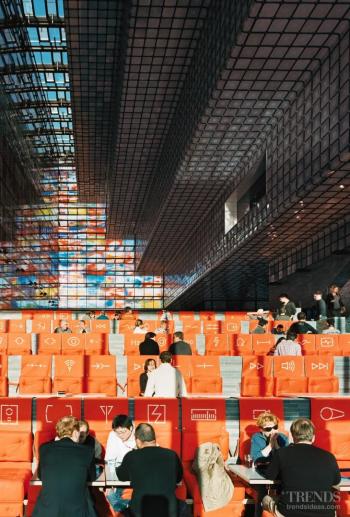 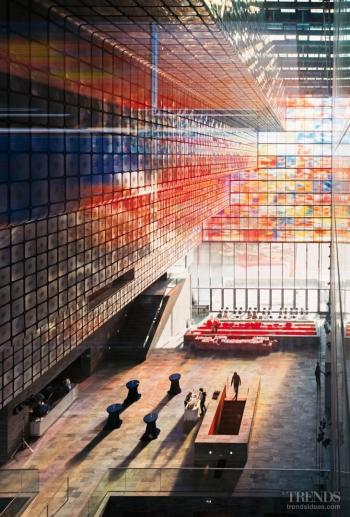 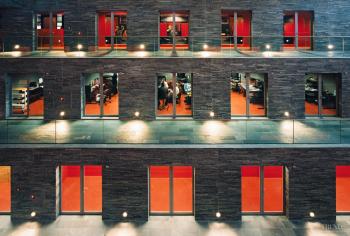 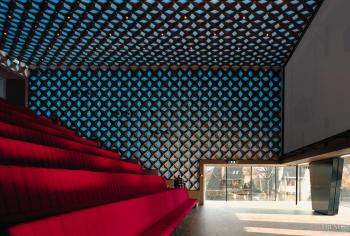 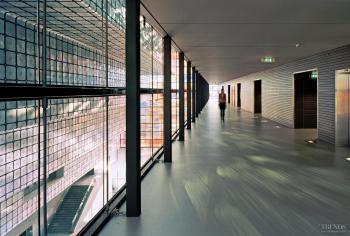 The Sound and Vision structure may present a glistening, united front from the outside, but this is just half the design story. Inside, the public facility extends 16m below ground as the cube rises 26m above it. Visitors are in for a Dantesque experience when they enter the superstructure – with a bright, breezy heaven above constituting the Media Experience and offices, and the darker archival nether regions separated out below them.

The architecture of the building is designed to highlight its functional distinctions, says Beelen.

"The archives, requiring a cool, stable temperature, became a necropolis of sorts, complete with a red glow emanating from the openings, as from an inferno," he says. "Upstairs you have the glitter and glamour that many people associate with the world of television."

A central reception hall divides the two entities laterally, but a chasm descending to the base of the structure and up to the skylight-lit roof of the cube also divides the space vertically. From a foot bridge that crosses from the entry to the reception, visitors can look down upon giant steps that climb one side of the chasm and provide access to archive viewing rooms.

The red glow referred to by Beleen comes from these viewing rooms, painted floor to ceiling in a vibrant red to give the feeling of tapping through the chasm's dark slate facades to reach the inner, visually fiery chambers. The other, flush, side of this architectural fissure conceals the actual archives and stores.

Hanging above the central atrium, this time in inverted giant steps, is the Media Experience. Here, a network of intermediary spaces links two cinemas to an exhibition space and, at the top of the building, an expansive hall. This is replete with busy, interactive themed pavilions with names like Power and Media, and Behind the Scenes. The pavilion area has a completely different look from the greater building's architecture, and was designed by Hypsos and Northern Light CoDesign.

The exterior of the architectural housing for the Media Experience is clad with small squares of aluminium that are attached to the structure with springs. These tiles reflect the colours that filter through from the outer skin. A star element, in the shape of a microphone, has been punched into each individual metal tile.

Opposite the stepped-out Media Experience is another sheer wall concealing offices. The 26m-high glass wall doubles as a Wall of Fame, consisting of stylised portraits of famous television personalities. Created from sandblasted dots in two tones, this was also designed by Jaap Drupsteen.

From the reception area, the Institute's plunging archival depths and overhanging Media Experience sit in comfortable, if dramatic, proximity – the two distinct facilities unified under one shining, translucent skin.