Medical research in Australia has never had a prominent public face, despite its enormous value and the breakthrough discoveries that have made the country a leader in the field.

All that is changing, however, thanks to a new facility in Perth. The Harry Perkins Institute for Medical Research (North), designed by Hames Sharley, has taken scientific research out of the back room and brought it into the spotlight.

Hames Sharley director James Edwards says every aspect of the building design was influenced by the nature of the creative research activities and investigations within.

"Medical research is given visual expression at many different levels, both in the fabric of the building and in the visual display of ideas," Edwards says. "The exterior palette of materials is comparable to the skin of the human body – the eyes, skin and hair colours all come from a subtle warm palette, which is what we have created on the exterior of the building. The west elevation, for example, features brown anodised aluminium with a custom profile that gives the facade a craft-like feel. This elevation has no windows to avoid heat gain from the sun."

While double-skinned glass features on other elevations, some areas are clad in precast concrete with slot windows, which define the nature of the light-controlled laboratories within. 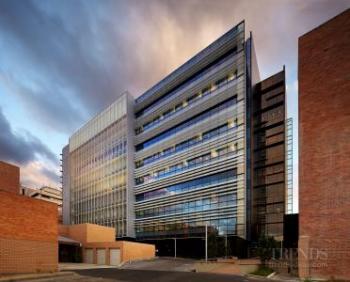 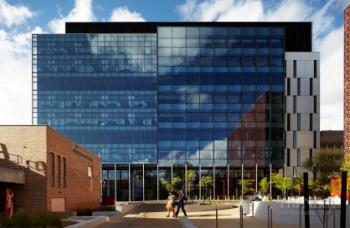 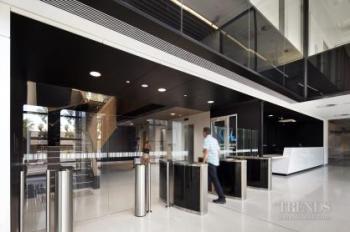 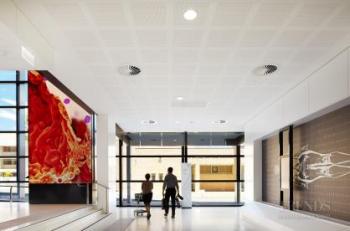 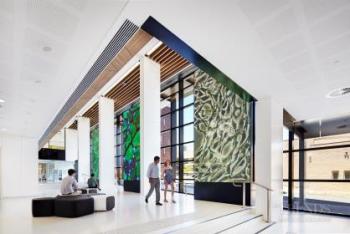 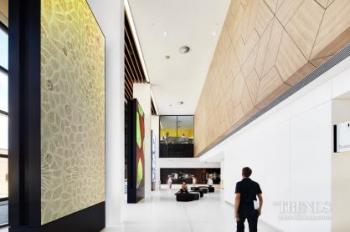 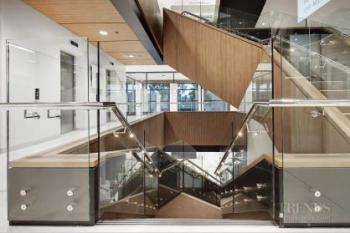 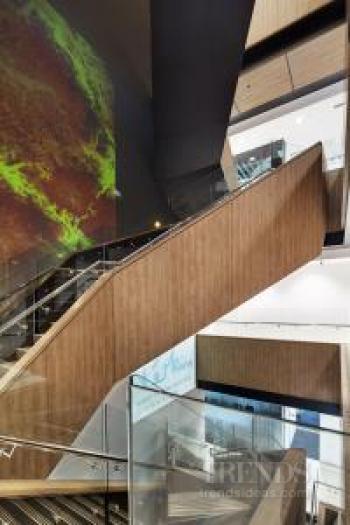 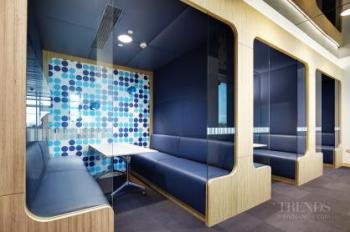 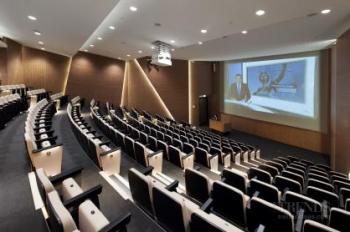 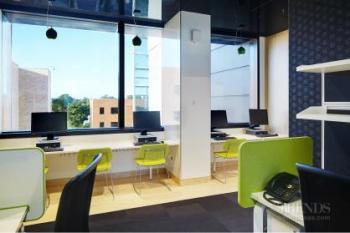 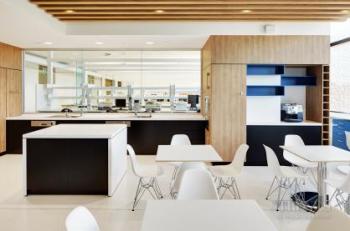 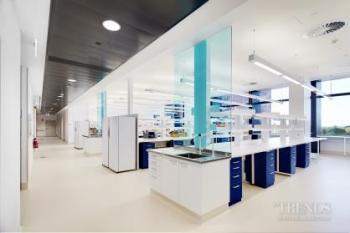 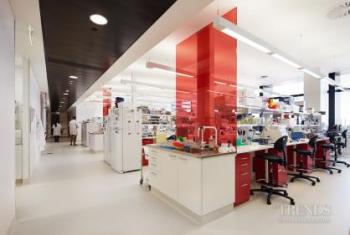 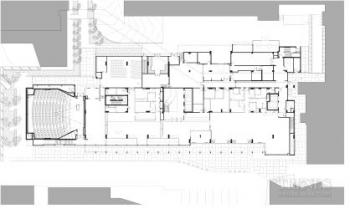 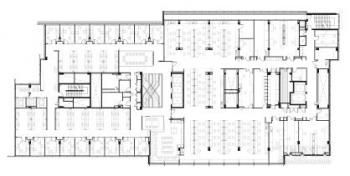 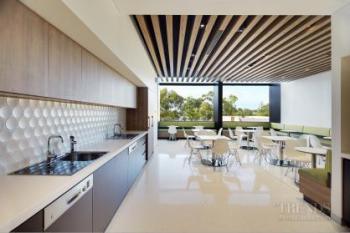 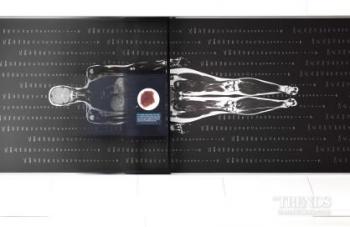 The 10-storey building was also designed to reference the 1950s post-war international style of the adjacent Perth Chest Hospital and Nurses' Quarters. Principal access routes and visual links through the site are maintained, and there are attractive landscaped areas with seating and shade trees.

Edwards says the concept of accessibility and openness was a key driver for the design, helping to determine the ground-level entry to the building.

"In the past, august institutions such as this would have had processional steps leading up to a formal entry. We wanted to create an entry that would not be intimidating. This was part of our brief – to provide a facility that would have strong links to the local community."

To this end, the ground-floor foyer has been designed as a public display and function space. An electronic artwork covering almost 100m2 displays colourful images of microscopic research across three double-sided digital banners, which are visible from inside and outside the building.

A second installation portrays oversized MRI images of the human body, and presents a vertical beam of light that travels the length of the installation, simulating an MRI scan. Moving digital screens stop at points to run videos of Perkins research relating to each part of the body.

"Furthering the human body analogy with the building, an exploration of human anatomy reveals an intensity of colour, pattern and activity internally, and this is reflected in the use of colour and pattern right through the building – not just in the displays," says Edwards. "Both the colour palette and the patterns have been abstracted from magnified microscopic images provided by the researchers, with warm colours giving way to cooler shades moving up the building.

"Concentrations of colour are provided where there are the most intense concentrations of people, notably the highly activated core of the building, which houses meeting rooms, lunchrooms, lifts, toilets and the stairway."

Edwards says the dramatic sculptural form of the stairway was designed to encourage staff to use the stairs rather than lifts.

"We needed to provide opportunities for people to connect and interact informally. Initially, the client thought this might have been a waste of space that could otherwise be used for laboratories, but we recognised that it would help to break down territorial boundaries, which was extremely important. An open stair avoids barricades – it opens up each floor rather than closing it off."

The extensive use of natural timber, which can be seen in the stair balustrading, ceiling panels and in other circulation areas, was designed to help humanise the very sterile, controlled environment of the laboratories.

"Here again the patterns were extracted from research images. The repeating hexagonal pattern references cellular images– a pattern we kept seeing over and over," the architect says. "The researchers were strongly engaged in this entire process, which has helped them accept and feel part of the project."

Edwards says this was particularly crucial in view of the substantial changes introduced to the work environment.

"This building represents a radical departure from the established orthodoxy for laboratory buildings," he says. "The whole design is aimed at encouraging collaboration, interaction and flexibility. Research scientists are no longer isolated, and we have rearranged the conventional layout of a research facility, whereby laboratories and office desks are in close proximity. Surveys show that researchers today spend more time in their offices analysing data from experiments carried out remotely. They are better served in an environment where they can talk to colleagues and exchange ideas."

To this end, Hames Sharley placed communal areas between the laboratories and offices, and provided views through glass back into the labs.

"We also placed meeting rooms in the central core, which avoids them being colonised by any one group. Everything is shared, and this in itself, required an entirely new management procedure, and trust on the part of the researchers. Laboratory consumables are not kept on individual benches; they are dispensed from a central store. This has meant the labs are much less cluttered, because nothing is hoarded."

Edwards says laboratories, by their very nature, can be visually chaotic. The new operating system helps to avoid this. So, too, does the white colour of the walls and ceilings. In contrast, the main circulation route alongside each laboratory is defined by a black ceiling.

"We gave each neighbourhood an identity, however. Each floor is colour coded – filing cabinets and glass panels at the end of each row of workstations are brightly coloured.

"We also ensured every room, aside from the light-controlled areas, is flooded with natural light from large windows. We were fortunate that the floor levels needed to align with floors in the adjacent hospital, so the ceiling heights are much higher than other research facilities. Near the perimeter, the ceilings slope upwards, which helps to maximise the natural light."

"The engagement with the community has already started," says Edwards. "The demonstration laboratory is fully booked a long time in advance, with many high schools taking advantage of the facilities. The institute also hosts corporate team-building events and quiz nights, which are all highly successful."

In keeping with the holistic nature of the project, numerous sustainable initiatives help to reduce energy costs. The building is oriented on an east-west axis to maximise daylight penetration and optimise passive design. As well as avoiding glazing on the east and west facades, the thermal mass properties of the exposed concrete slab reduce the need for constant heating and cooling.

Excessive heat is also avoided by the double glass skin on the north facade, which creates a chimney effect. Heat is taken away from the outside of the laboratories and naturally exhausted at roof level. There is also external shading to all facades. External motorised blinds between the two glass skins eliminate solar penetration while still allowing the natural light to flow through.

The air conditioning system has an economy cycle operation that allows outside air to provide some or all of a zone's cooling needs without mechanical cooling from chillers. Variable speed drives allow equipment to be accurately controlled, which results in greatly reduced energy use.

Air-to-air heat exchangers precondition the outside air, and variable volume air conditioning allows different areas to be supplied with conditioned air from one item of plant, while maintaining accurate temperature control in each space. Water-cooled high-efficiency chillers also provide increased efficiencies over conventional chillers, particularly during part-load operation. This results in significant reductions in energy usage.

The success of the building is not only evident in the community involvement, but also in the industry awards it has received to date.

These include the Jeffrey Howlett Award for Public Architecture, 2014 in the Western Australia Architecture Awards; the Best Education Building in the Master Builders-Bankwest Excellence in Construction Awards 2014; and the Interior Architecture Award 2014 from the Architects Institute of Australia.