Running the idea past a client of a feature surface made of thousands of pieces might have them thinking about the budget and looking nervous. However, it's a different story when your passion is design and it's your own home.

This large ensuite is an extension to designer Jason Saunders' own character home built in the 1930s. From the street, the period home is distinct from the extension – the former is white and the add-on painted black. Once indoors, the home's classic ceiling roses and cornices give way to a crisp, pared back aesthetic in the addition.

The main linking element is the flooring. The designer sourced recycled jarrah floorboards to extend the home's original floor into the ensuite.

"As designer and owner we naturally had free-rein and wanted something a bit different and something personal to us – minimalist yet at the same time luxurious. To this end, the bathtub area is accentuated by a feature wall of Japanese Luna ceramic mosaic tiles – creating both an air of intimacy, and a wow factor."

The tiles are laid individually by hand – all 2500 of them. Their curves pick up light from the corner pendant and the floor lights behind the tub, reflecting the light in several directions. 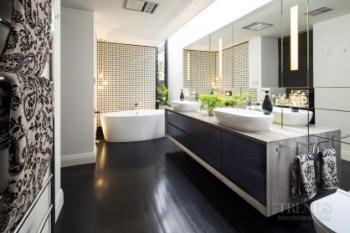 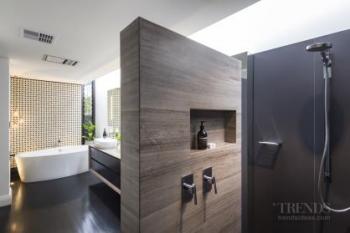 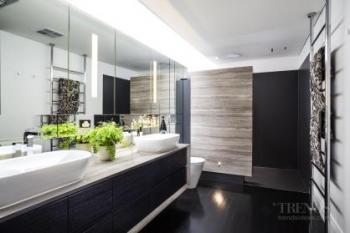 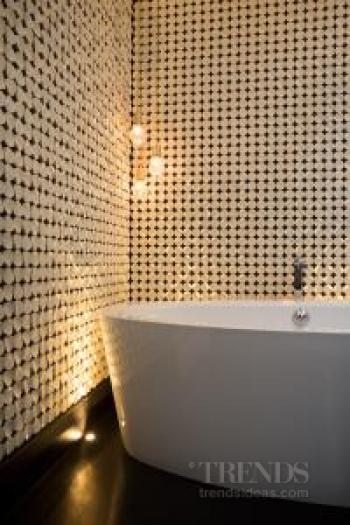 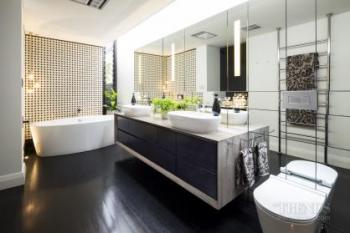 At the other end of the expansive ensuite, a shower stall with a feature grey marble blade wall offers another intimate space.

"Overall, we wanted the space to read as one large volume and to accentuate this we stopped the marble shower wall short of the ceiling."

The prominent dark veins in the marble connect with the jarrah floor, the stained veneer vanity front and the black walls of the shower. The rich stone is also seen on the adjacent vanity.

The black shower walls are in Laminam, a light, compressed ceramic sheet that is scratchproof, knock-proof and generally low upkeep.

As the bathroom faces the street it is walled for privacy, with a vertical strip of glass louvres providing light and a glimpse of the garden. However, the dominant natural light source is the stepped up, concealed glass ceiling that runs the length of the room – flooding soft, indirect light right through the bathroom. A strip of LED lighting in this recessed space ensures that it's a feature by night as well as by day.

"The colour palette is mainly black, white and mirror," says Saunders. "Overall, this bathroom balances a simple, expansive look with areas of intimacy – like the shower and tub."