Many projects start small and grow into something much bigger, but few would be on the scale of this project. It began with a proposed kitchen remodel to a high-end waterfront apartment on Finger Wharf, Woolloomooloo, and ended with an entire apartment refurbishment.

Managing director Justin Quinlan and project architect Jonathan Spicer of The Quinlan Group were initially contracted to design a new kitchen for the new owners of the apartment.

"It soon became clear there were spatial problems that couldn't be fixed by simply replacing the kitchen," Quinlan says. "For example, there was a large area in the centre of the apartment that seemed like wasted space. It was too narrow to be a dining room, but too wide for a corridor. It was also very dark, and there was a library-study that took up space at one side, blocking the view from the corridor."

Quinlan says the project plan subsequently grew in stages, eventually involving the gutting of most of the apartment. Walls were removed, the library-study and corridor disappeared, and the kitchen was moved to the other side of the building. This created one extra-large open-plan living space.

"Opening up the space brought in much more light from the east and allowed a view from the front door right through the apartment and out to the water beyond," the designer says. 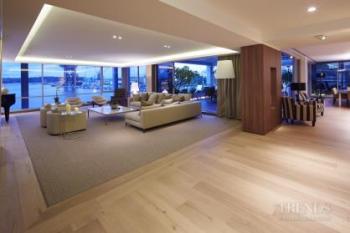 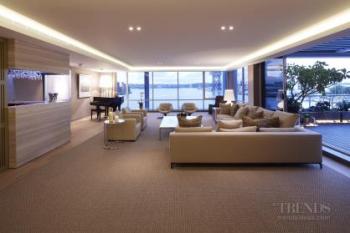 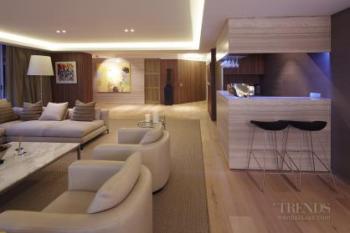 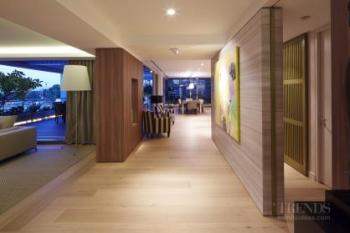 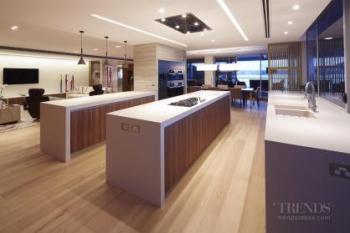 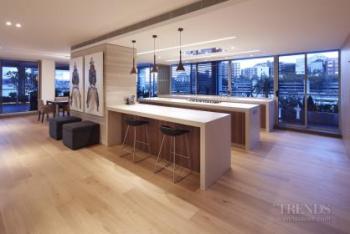 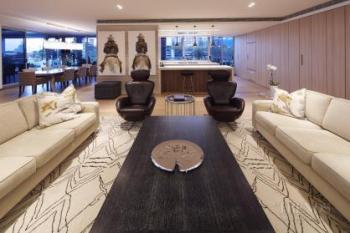 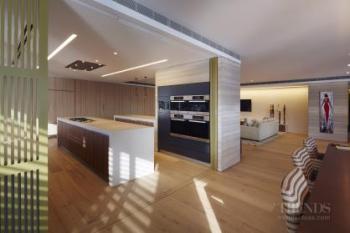 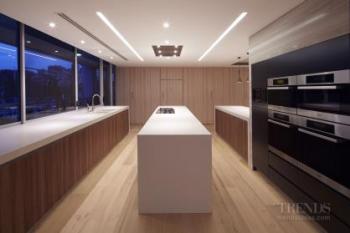 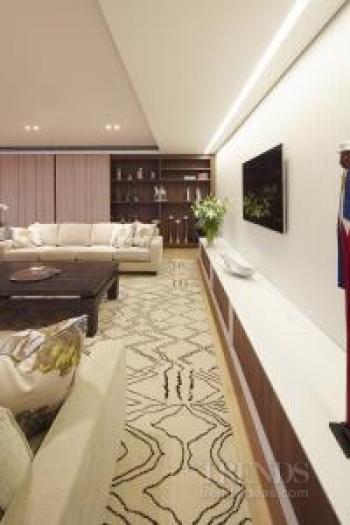 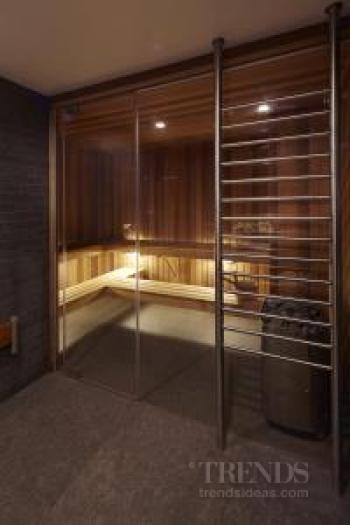 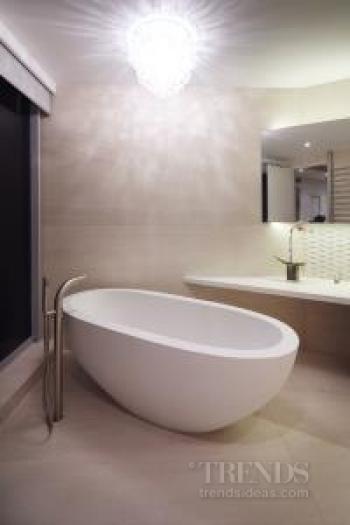 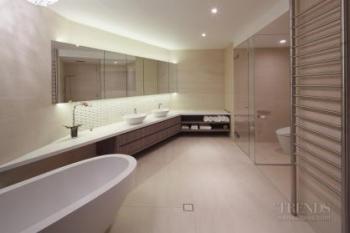 Because the owners love to entertain on a grand scale, the apartment was divided into two distinct zones – public and private.

"The interface between these two areas is a single continuous wall of joinery in a woodgrain design, which can open and shut in multiple configurations. For example, hidden doors in the wall open from the kitchen to an office and a butler's pantry. Another door hides the main hallway to the back bedrooms. This passage also houses a wine cellar."

Quinlan says the kitchen can also be closed off from the dining area by large sliding screens, which is appropriate when caterers may be working in the kitchen. The screens tuck into the side of a stone volume that anchors one corner of the kitchen.

"There are several of these solid walls, including the bar, which are wrapped in Novo Mesto honed limestone. The stone accentuates their solidity and permanence, and the structural role they play."

However, it is the woodgrain-style joinery that takes a starring role. The design team specified a mix of light and dark Navurban prefinished decorative surfaces from New Age Veneers. Hazelwood features on the darker kitchen and living room cabinets, while Oakley is the lighter surface on the continuous wall. The bathroom cabinetry is finished in Earlwood.

"We use a lot of Navurban surfaces in our projects," says Quinlan. "They were a perfect choice for this interior, because of their aesthetics and also because they are durable and water resistant, which is ideal for the kitchen."

The pared-back materiality of the Navurban decorative surfaces is a key aspect of the design. Bistre Grande Eterno from Tongue N Groove flooring complements the scheme.

"We wanted a look that is reminiscent of Brazilian modernist design," Quinlan says. "These materials bring that to life."

The joinery in the apartment was custom manufactured by N&J Joinery, a company that specialises in high-end precision joinery as well as large production runs.

"The continuous wall was manufactured as a massive piece of joinery, rather than a wall clad in veneer," Quinlan says. "It was essential to have it built this way as it needed to be very precise – it couldn't even be a millimetre out, or the panels would not have fitted together.

"N&J Joinery built all the veneer elements, including the walls flanking the entry lobby and all the cabinetry. Essentially, if it wasn't clad in stone or fabric, they built it."

The Navurban Hazelwood cabinets are topped with white Corian – this also forms waterfall sides to the islands in the kitchen.

"There was no compromise when it came to the joinery," says the designer. "Every piece was precision built to the especially high standard demanded of a luxury apartment in such a prestigious development."

Quinlan says the success of the project can also be attributed to the clients, who were open to new ideas and prepared to take on the challenge of upgrading the entire apartment.

"The end result is a testament to what can be achieved when everyone works together."